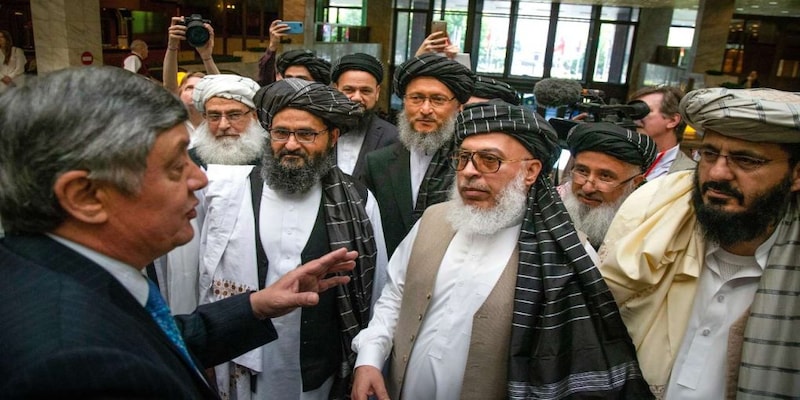 In an exclusive interview to CNN-News18, Stanikzai, an alumnus of the Indian Military Academy, said they will not let Pakistan use Aghanistan's land against India.

Sher Mohammad Abbas Stanikzai, who is tipped to be Afghanistan’s foreign minister, wants to establish a friendly relation with India, neighbouring countries and the whole world. He is the Deputy Political Office of the Islamic Emirate of Afghanistan and head of the negotiation team with America.

In an exclusive interview to CNN-News18, Stanikzai, an alumnus of the Indian Military Academy, said they will not let Pakistan use Aghanistan's land against India.
Here are excerpts from the interview:
Q: How do you see the Taliban's administrative view towards India?
Ans: The Islamic Emirate of Afghanistan, our foreign policy is to have good relations with all our neighbouring countries and with the whole world. The American forces were here in Afghanistan for last the 20 years and after that, they are now withdrawing from the country, so will have friendly relation with America after this and NATO also.
So, I think they should come back and take part in the rehabilitation of Afghanistan. The same goes for India, we want to establish friendly relations before like cultural and economic and also other ties that we had with them. Not only with India, all our neighbouring countries including Tajikistan, Iran, and Pakistan.
Q: There is a fear that the Taliban may be hostile to India, they may team up with Pakistan and target India. How do you see this assessment? Is this correct or wrong?
Ans: What comes up in media is most often wrong, there is no such statement or indication from our side. We want good relations with all our neighbouring counties of the region.
Q: There is a fear that Afghanistan could become a sanctuary for terror groups that are a threat to India such as Lashkar and Jaish. What are your comments on that?
Ans: There was no threat from Afghanistan throughout our history to any of our neighbours including India and it will not happen at all. There is no doubt that there is a long political and geographical dispute between India and Pakistan. We hope they do not use Afghanistan in their internal fight, they have a long border, they can fight among themselves on the border. They should not use Afghanistan for this and we will not let any of the countries use our land for this.
Also read | Taliban warns India, says 'will not be good if it sends military to Afghanistan'
Q: It's a strong statement that you are giving that you will not allow Lashkar or Jaish to play in your territory. You are confirming that?
Ans: This is our duty we will not allow anyone to use the Afghan side against any country in the world.
Q: Sir, you were trained in IMA some decades ago. Any memory of that place and how was your time when you were in India?
Ans: It was during my young age, I was trained there before the Russians came to Afghanistan. I was under training in IMA and graduated from IMA.
Q: Are you still in touch with those people?
Ans: No, not in India
Also read | Afghanistan crisis explained: What led to quick collapse, Taliban seizure?
Q: Who do you blame for the Kabul attack that happened a few days back?
Ans: In the media, I have seen that Daish took responsibility for the attack.
Q: But reports suggest that intelligence suggested that Haqqani will do the blast and ISIS will make the claim. What do you have to say on that?
Ans: This is what enemies of the Afghan people say so. It's not true and it's completely false. Since Daish has taken responsibility, it is clearly known that Daish has done it
Q: There are many Hindus and Sikhs who are still in Afghanistan. Will you help India to evacuate them?
Ans: I think there is no requirement to evacuate them. Afghanistan is their homeland and country so they can live here peacefully and there will be no harm to their lives here. They can live as they were living before and we hope that the Hindus and Sikhs who were here in Afghanistan and have migrated in the last 20 years because of that previous regime to India, we hope that we should see them coming back to Afghanistan soon.
Q: How do you see the recognistion of Taliban by the world powers and India?
Ans: We hope that. On the ground reality since the Islamic Emirate of Afghanistan will form a government, our neighbours and the other countries in the world need to have good relations with us. When the new government is announced, we hope that all those countries who are related in the region, especially the US, and other countries, support us.
Q: India has done a lot of development work in Afghanistan. What do you think will happen to that ?
Ans: Development done in Afghanistan by India is our national asset and we will keep it like that. We hope that in the future all incomplete work is completed by India. We invite India to come and start again and complete those projects.
Q: And you will provide all security to them?
Ans: Yes, if somebody is coming and working in your country then you will have to provide them security. I don't think there is any need to ask such questions.
(Edited by : Ajay Vaishnav)
EXPLAINERS
EXPLAINED: Where The Taliban Gets Its Fighters, How It Makes Money And What Keeps It Ticking In Afghanistan

As the last US troops get ready to leave Afghanistan, the Taliban has swiftly moved to seize control of more territory and launch unrelenting campaigns against the Afghan national forces across the country. But without crucial US air support, the Afghan forces have struggled to counter the Taliban war machinery and the insurgents have now added to the territory they control.