Russia-Ukraine War News Live Updates: Russia has been accused by Ukraine's government of violating a ceasefire agreement by bombarding a path designed to allow people to escape Mariupol, which is under siege. Residents of the port city are not only subjected to Russian bombing, but they also lack heat, water, sanitary facilities, and telephones. US President Biden on Tuesday banned the import of Russian crude oil and certain petroleum products, liquefied natural gas, and coal. Meanwhile, the Indian Ministry of External Affairs said on Tuesday that Indian students stranded in the war-torn Ukrainian city of Sumy have been moved out and flights under Operation Ganga are being prepared to bring them back home. Track all the live updates from the Russia-Ukraine war here:

Britain is planning to supply Ukraine with anti-aircraft missiles to help it defend its skies from Russian invasion, defence minister Ben Wallace said, stressing that the technology fell within the definition of defensive weapons.

"It is vital... that Ukraine maintains its ability to fly and suppress Russian air attack," Wallace told lawmakers.

"In response to Ukrainian requests, the government has taken the decision to explore the donation of STARStreak high-velocity man-portable anti-air missiles. We believe that this system will remain within the definition of defensive weapons, but will allow the Ukrainian force to better defend their skies."

Wallace said the decision had been taken in principle to supply the systems, and the government was working out how to get them into Ukraine and train Ukrainian forces to use them.

EU not to ban Russian oil like US: Josep Borrell exclusive
In an interview with CNBC-TV18, Josep Borrell, High Representative of the European Union and Vice President of EU Commission, confirmed that the EU will not impose a ban on Russian oil and gas because… A planned evacuation of civilians from the Ukrainian town of Izyum in the eastern Kharkiv region was held up by Russian shelling on Wednesday, regional governor Oleh Synehubov said an online post. "Buses are still waiting at the entrance to Izyum," he said, adding that negotiations with the Russians were under way with the support of the Red Cross.

Russia-Ukraine war: Scant progress evacuating Ukrainian civilians despite Russian ceasefire promise
Kyiv said 30 buses and eight trucks of supplies failed to reach it on Tuesday after they came under Russian shelling in violation of the ceasefire. Moscow has blamed Kyiv for failing to halt fire. Discovery to suspend broadcasts in Russia

The announcement comes as CNN, the BBC and others suspended broadcasts from Russia in response to a new law that threatens journalists with prison time for disseminating "fake" news about what the Kremlin describes as a "special military operation." National Media Group also was in partnership with Netflix, which in late 2020 launched a version of the service with Russian subtitles, local films and offered local payment options. Netflix suspended its Russian service on Sunday.

Ukrainian Foreign Minister Dmytro Kuleba on Wednesday tweeted that Russia was "holding 400,000 people hostage" in Mariupol and called for an end to the "barbaric war on civilians and babies".

Ukrainian Foreign Minister Dmytro Kuleba said on Wednesday Russia must urgently observe a temporary ceasefire to allow repairs on a power line to the Chernobyl nuclear power plant, saying radiation could be leaked if an electricity outage continues.

"Reserve diesel generators have a 48-hour capacity to power the Chornobyl NPP. After that, cooling systems of the storage facility for spent nuclear fuel will stop, making radiation leaks imminent," he said on Twitter. 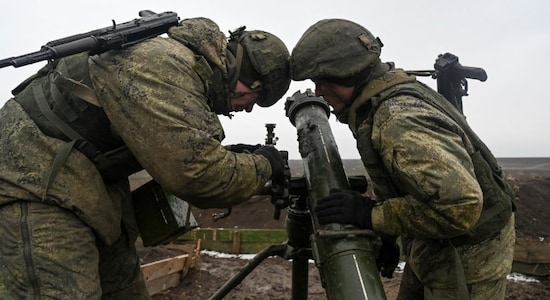 Prime Minister Boris Johnson said Britain would gain from accepting refugees and that he expects hundreds of thousands of visas to be granted to people fleeing Ukraine amid criticism of his government for keeping strict entry requirements.

"The numbers are almost a thousand... and they will rise very sharply... We expect those numbers to rise to in the region of the hundreds of thousands," Johnson told lawmakers, referring to the number of visas granted to Ukrainian refugees fleeing Russia's invasion of the country.

Russia announced a new ceasefire in Ukraine on Wednesday to let civilians flee besieged cities, but there were only limited signs of progress providing escape routes for hundreds of thousands of people trapped without medicine or fresh water.

The governor of Sumy, an eastern city, said civilian cars were leaving for a second day through a safe corridor set up to Poltava further west.

But by midday in Ukraine there was no confirmation that any of the other evacuation corridors had been successfully opened, including a route out of Mariupol, seen as the most urgent, where the Red Cross has described conditions as "apocalyptic".

The mayor of Enerhodar, site of Europe's biggest nuclear power plant which Russian forces seized last week in a battle that raised global alarm, said humanitarian supplies would be allowed in and buses would take residents out on the way back.

The greatest humanitarian concern is Mariupol, a southern port surrounded by Russian troops for more than a week.

Residents there have been sheltering underground from relentless bombardment, unable to evacuate their wounded, and with no access to food, water, power or heat. Local ceasefires to let them leave have failed since Saturday.

Kyiv said 30 buses and eight trucks of supplies failed to reach it on Tuesday after they came under Russian shelling in violation of the ceasefire. Moscow has blamed Kyiv for failing to halt fire.

More than 2 million people have fled Ukraine since President Vladimir Putin launched the invasion nearly two weeks ago. Moscow calls its action a "special military operation" to disarm its neighbour and dislodge leaders it calls "neo-Nazis."

Sweden is preparing tents, sports halls, warehouses and exhibition centres to house a growing number of Ukrainian refugees, Immigration Minister Anders Ygeman said on Wednesday. Around 2,000 refugees arrived in Sweden on Tuesday alone, Ygeman said, roughly doubling the number who have so far come to escape the fighting.

The Migration Board is preparing to house around 30,000 refugees from Ukraine in total over the coming months with around 12,000 beds need "immediately" or "shortly". The total number of Ukrainians coming to Sweden could be higher as the majority of those arriving so far are staying with relatives. "It's not just tents we are going to use, it will be warehouses, exhibition centres, sports halls," Ygeman told reporters. (Image: Reuters)

"The Migration Board is doing all it can to make sure that those people who come also have a roof over their heads." 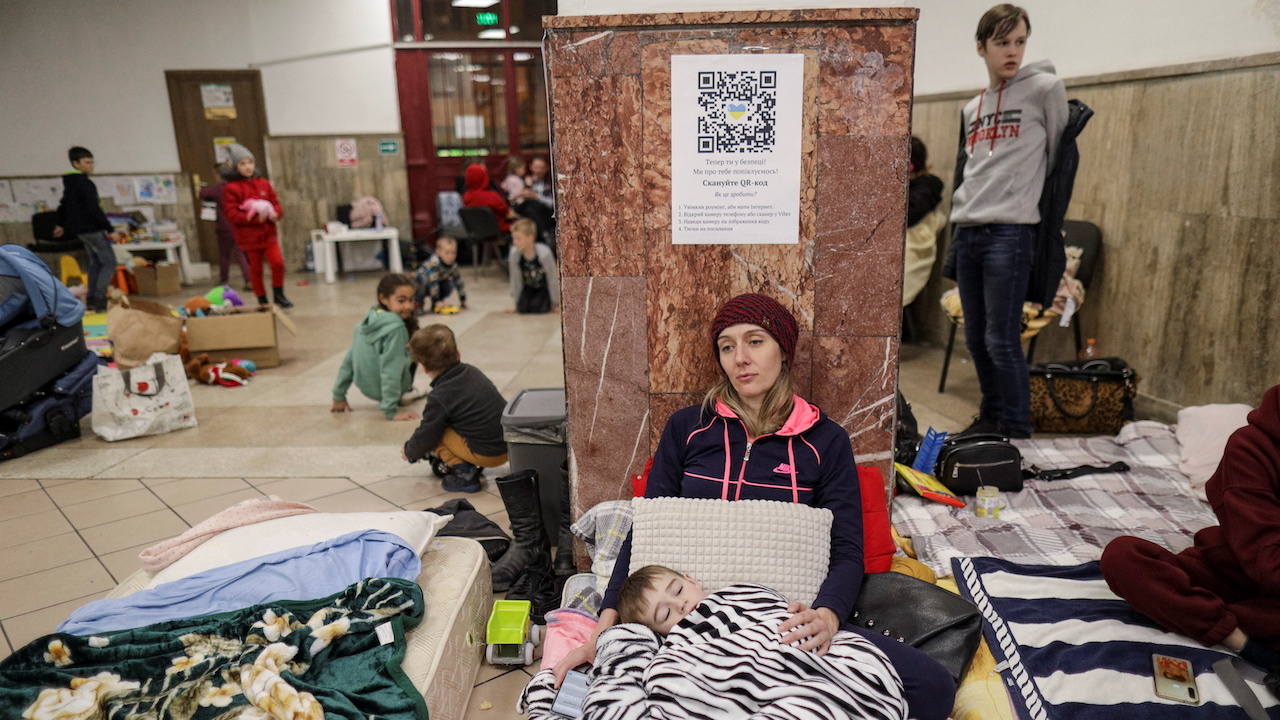 (Russian President Vladimir Putin will hold a meeting with members of his government on Thursday and the main topic will be measures to minimise the impact of sanctions on the Russian economy, the Kremlin said in a statement.

EU acting against Putin, not the Russian people: Estonian PM

Estonian Prime Minister Kaja Kallas has appealed to the people of neighboring Russia to make it clear the European Union is not acting against them, but against President Vladimir Putin following his invasion of Ukraine.

Speaking to lawmakers at the European Parliament in Strasbourg on Wednesday, Kallas stressed that current sanctions are "intended to isolate President Putin and his government which is conducting a brutal war against Ukraine."

But she also cautioned the Russian people that the consequences of sanctions implemented against Moscow since the invasion will get much worse, warning that Putin is an “autocrat” who "does not care for the people" and "only cares for his power [...] that is something that is so hard to understand in a democratic world.”

Kallas, reflecting on her childhood growing up in Soviet-era Estonia, said: "Your government is already instituting practices that are familiar to me.
"Like censorship, like threatening journalists with a 15-year prison sentence for speaking about the war, like rationing for foodstuffs, like asking teachers to report on the political sympathies of their pupils and their parents." (Image: AP) 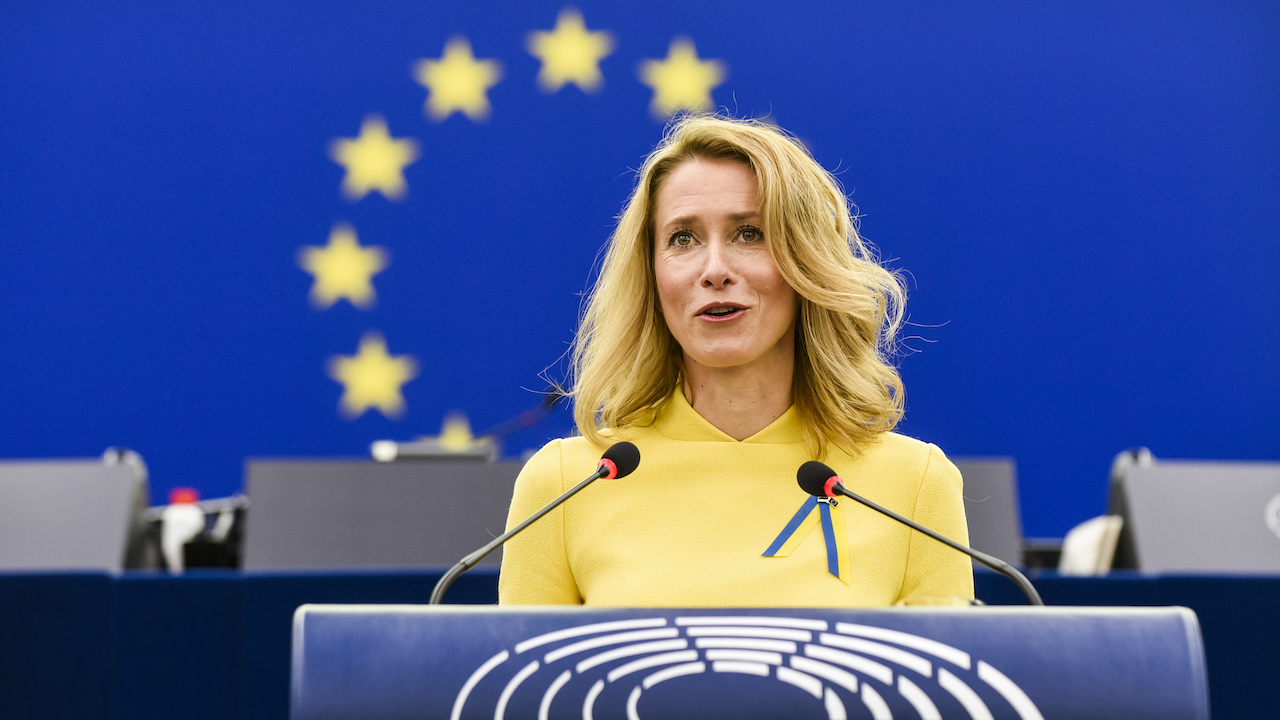 Members of Russia's National Guard have detained more than 400 people in Ukraine's Kherson oblast who protested against the occupation of their hometowns by Russian forces, Ukraine’s military high command said on Wednesday. "Due to the furious resistance of the residents of Kherson, the occupiers are attempting to introduce an administrative-police regime," it said in a statement.

The European Union has just announced fresh sanctions on Russia over its invasion of Ukraine. These sanctions include: