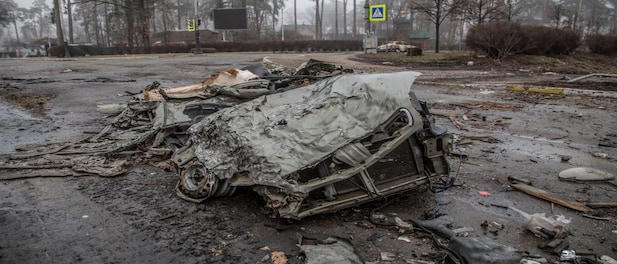 Russia-Ukraine news: External Affairs Minister S Jaishankar on Wednesday condemned the Bucha killings in Ukraine and supported the call for an independent investigation. Replying to India's stand on the Russia-Ukraine conflict in the lower house of the Parliament, he said, "Many MPs brought up the incident of killings in Bucha and I want to say that we are deeply disturbed by the reports. We strongly condemn the killings which have taken place there. It's an extremely serious matter and we support the call for an independent investigation.” Reports have said that more than 300 people have been killed and the total number of casualties was likely to increase as the whole city is being checked. Hundreds of civilian residents were found dead on the streets, beside their homes and in mass graves. Ukraine accused Russia of the Bucha massacre. However, Russia has denied the allegations and said that it was Ukrainian propaganda. Catch all the latest development around the Russia-Ukraine War here:

Thank you for joining our coverage of Russia-Ukraine news. We will now wrap the blog. Good night, folks!

Russian artillery pounded key cities in Ukraine on Wednesday, as its president urged the West to act decisively in imposing new and tougher sanctions against Russia in response to civilian killings widely condemned as war crimes. The United States announced a new round of sanctions targeting Russian banks as well as Kremlin officials and their family members. The head of the European Commission signalled further moves - including examining energy imports - on top of sanctions unveiled by the bloc on Tuesday.

A major reception centre providing beds for Ukrainian refugees in Warsaw will close on Friday, as fewer people need this kind of support, the head of the central Mazowsze region said on Wednesday. Since Russia invaded Ukraine on Feb. 24, the fighting has displaced more than 10 million people and forced more than 4 million to flee abroad, in Europe's biggest refugee crisis since the end of World War Two, according to the U.N. refugee agency. More than 2.52 million people have fled through Poland, according to the Polish border guard service. The number of people crossing from Ukraine stabilised at around 20,000 daily in April, compared with more than 140,000 in early March.

Finnish customs said on Wednesday they had stopped works of art worth around 42 million euros ($46 million) from being returned to Russia last weekend due to European Union sanctions, and would consult with Brussels on their status as luxury goods. Customs seized three haulages of paintings, statues and antiquities on their way back to Russia via Finland from Italy and Japan, where they were temporarily on loan from Russian museums and art galleries, said Sami Rakshit, director of the Finnish customs enforcement department. Rakshit said pieces of art are considered luxury items that fall under the EU's sanctions against Russia, imposed for its invasion of Ukraine. Russia calls it "a special operation" to demilitarize and "denazify" its neighbour.

Turkey's Foreign Minister Mevlut Cavusoglu said on Wednesday that civilian killings in Ukraine had made peace talks between Moscow and Kyiv more difficult but that he expected more negotiations, possibly eventually between foreign ministers. Speaking at NATO before a meeting with his counterparts, Cavusoglu also said the alliance was aware of Ukraine's demands for more weapons and allies were looking to step up help.

A fire broke out in the early hours of Wednesday at a villa belonging to Russian state TV host Vladimir Soloviev on the shores of Lake Como in northern Italy, causing limited damage, firefighters said. The wall of a second Soloviev villa near the lake was daubed with spray-paint and red paint was also poured into the water in its swimming pool, two investigative sources said. The graffiti on the wall outside the entrance to the villa read "Killer" and "No war", the sources added. The houses are part of the properties worth in total 8 million euros ($8.7 million) owned by Soloviev around Italy's Lake Como that Italian police said they seized after he and other oligarchs were placed on an EU sanctions list following Russia's invasion of Ukraine.

US helping to collect evidence of war crimes in Ukraine -Garland

The United States is assisting with international efforts to collect evidence of possible war crimes committed in Ukraine by Russia, US Attorney General Merrick Garland said on Wednesday. The US Department of Justice's senior prosecutor met with his French counterpart in Paris this week, Garland said.

Russia will struggle to rapidly redeploy the forces it has withdrawn from the area around Ukrainian capital Kyiv to the Donbas region in the east as units need reconstituting and re-equipping, a Western official said on Wednesday. The official said the withdrawal of Russian forces from the north of Kiev and around Chernihiv was largely complete, but Russia would need "some considerable period of time in order to reconstitute, refurbish, re-equip and integrate new troops into those formations."

The Justice Department announced Wednesday that it had charged a Russian oligarch with sanctions violations and that officials have dismantled a cybercrime operation controlled by a Russian military intelligence agency. The case against against Konstantin Malofeyev accuses him of trying to evade earlier Treasury Department sanctions by seeking to secretly acquire media organizations across Europe. Officials also seized millions of dollars they say are traceable to the sanctions violations.The announcement comes two days after U.S. officials seized a yacht in Spain belonging to a Russian oligarch, Viktor Vekselberg, with close ties to Russian President Vladimir Putin.

Some Indian refiners set to cut May Saudi oil, snap up Russian barrels

At least two Indian refiners plan to buy less Saudi oil than usual in May, after the kingdom raised the official selling price (OSP) to record highs for Asia, two sources said on Wednesday, as India increases purchases of cheap Russian crude. India, the world's third biggest oil importer and consumer, has been hit hard by rising crude values, with pump prices in some states touching record highs. Oil producer Saudi Aramco, the world's top oil exporter, has raised crude prices for all regions, with those to Asia hitting all-time highs. The Middle East accounts for the bulk of India's oil imports, with Iraq and Saudi Arabia the top two suppliers to Asia's third largest economy. The sources at the two Indian refiners declined to be named, citing confidentiality. They did not disclose the volumes refiners would buy, and said the reductions in May would be marginal because they have to lift the amount they have committed to under annual contracts.

Hungary said on Wednesday it was prepared to pay rubles for Russian gas, breaking ranks with the European Union which has sought a united front in opposing Moscow's demand for payment in the currency. Hungary will pay for shipments in rubles if Russia asks it to, Prime Minister Viktor Orban told a news conference on Wednesday. Russian President Vladimir Putin has warned Europe it risks having gas supplies cut unless it pays in roubles as he seeks retaliation over Western sanctions for Moscow's invasion of Ukraine. With weeks to go to before bills are due, the European Commission has said that those with contracts requiring payment in euros or dollars should stick to that. Hungary's Foreign Minister Peter Szijjarto earlier said that EU authorities had "no role" to play in its gas supply deal with Russia, which was based on a bilateral contract between units of Hungarian state-owned MVM and of Gazprom. Hungary has been one of a few EU member states that have rejected energy sanctions against Moscow in response to the invasion, which Russia terms a "special military operation".

The European Commission proposed on Tuesday new sanctions against Russia over its invasion of Ukraine, including a ban on buying Russian coal and on Russian ships entering EU ports, and said it was working on banning oil imports too. "We all saw the gruesome pictures from Bucha and other areas from which Russian troops have recently left. These atrocities cannot and will not be left unanswered," the head of the European Union's executive, Ursula von der Leyen, said. "The four packages of sanctions have hit hard and limited the Kremlin's political and economic options. In view of events we need to increase our pressure further," she said in a speech posted on Twitter.

Bharat Petroleum Corp Ltd has bought 2 million barrels of Russian Urals for May loading from trader Trafigura, two sources familiar with the purchase said. BPCL and Trafigura did not immediately respond to requests for comment. The state-run refiner regularly buys Russian Urals for its 310,000 barrels per day (bpd) refinery in Kochi. With BPCL's purchase, India has so far booked at least 16 million barrels of Russian oil since February 24, similar to imports in all of 2021, according to Reuters calculations.

The 193-member UN General Assembly will vote on Thursday on a US push to suspend Russia from the Geneva-based UN Human Rights Council, diplomats said. A two-thirds majority of voting General Assembly members in New York can suspend a country for committing gross and systematic violations of human rights. Russia is in its second year of a three-year term on the 47-member Human Rights Council.

The International Committee of the Red Cross in Ukraine says it has met a convoy of private vehicles which had made its own way out of Mariupol and then accompanied the 500 people travelling from the besieged southern city to safety in Zaporizhzhia. The organisation has not been able to reach Mariupol itself. (BBC)