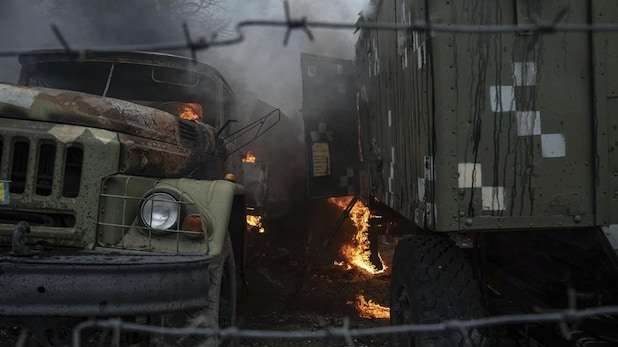 Russia's invasion of Ukraine is expected to take a dramatic turn on Friday with Moscow all set to formally annex four Ukraine regions — Donetsk, Luhansk, Zaporizhia and Kherson. Russian-installed administrations carried out referendums in these four partially occupied regions earlier. According to a report, the officials said a huge majority is in favour of joining Russia. While the vote is likely to pave the way for the formal annexation of swaths of Ukraine, Kyiv and its allies have called Russia’s referendums "illegal" and "sham". The Russia-Ukraine war has been raging on for over seven months now even as the West eyes imposing even more sanctions on Russia now. Here are the highlights of the Russia-Ukraine war:

Thank you for joining our coverage of the Russia-Ukraine crisis. We will now wrap the blog. Good night.

It has been 218 days since Russia's war on Ukraine, the latter's Ministry of Finance tweeted

Russia said on Thursday it was studying the possibility of a face-to-face meeting between Russian and U.S. negotiators on a landmark nuclear arms control treaty. In a briefing in Moscow, Foreign Ministry spokeswoman Maria Zakharova said Russia was open to reviving inspections under the New START treaty and considering the possibility of in-person meetings of a joint commission of representatives from the United States and Russia. Physical inspections under the treaty have been suspended since 2020, initially as a result of the coronavirus pandemic.

While the European Union agreed to curtail its use of Russian oil and gas, its member nations continue to import and export nuclear fuel that is not under EU sanctions - to the chagrin of the Ukrainian government and environmental activists. A cargo ship carrying uranium that departed from the French port of Dunkirk traveled the North Sea on Thursday, heading toward the Russian Baltic port of Ust-Luga. It was the third time in just over a month that the Panama-flagged Mikhail Dudin ship docked in Dunkirk to transport uranium.

Hundreds of kids from east Ukraine stranded in Russian camps

The Russian occupation radio and newspaper ads promoted the camps as a summer break from the war for Ukrainian children under their control, free of charge. Hundreds of families agreed in the occupied east and the south, Ukrainian officials and parents say. One bus convoy left Izium at the end of August, with the promise that the children would return home in time for the school year. Instead, Ukrainian forces swept though in early September, driving the Russians into a disorganized retreat and liberating territory that had been in enemy hands for months. Fifty-two children from Izium and around 250 more from other towns in the Kharkiv region, all between the ages of 9 and 16, are now scattered in camps, according to a Ukrainian intelligence official and a mother who hitchhiked into Russia to retrieve her daughter. Both, like nearly everyone involved in the issue, spoke on condition of anonymity to describe a sensitive and fraught situation.

European Union energy commissioner Kadri Simson called on Thursday for the bloc to cap the price of Russian gas exports to Europe. "I strongly believe we need a price cap on all Russian gas imports, at a level that still makes it attractive for them to export to Europe," Simson said in a statement, ahead of a meeting of EU energy ministers on Friday who will debate various options to tame high gas prices.

Latvians will be voting on Saturday in a general election that has been substantially influenced by neighboring Russia’s attack on Ukraine, political disintegration among the Baltic country’s sizable ethnic-Russian minority as well as issues relating to the economy, including high energy costs.

Russian President Vladimir Putin's spokesperson Dmitry Peskov said the ceremony would take place at 3pm (1200 GMT) on Friday in the St George's (Georgievsky) Hall of the Grand Kremlin Palace to sign "agreements on the accession of new territories into the Russian Federation". Agreements will be signed "with all four territories that held referendums and made corresponding requests to the Russian side", Peskov said.

Hungary cannot support the European Union's planned eighth round of sanctions against Russia over its invasion of Ukraine if those contain energy sanctions, Prime Minister Viktor Orban's chief of staff said on Thursday.

Putin moves to ban some western trucks from transiting through Russia

President Vladimir Putin signed a decree on Thursday authorising the government to ban some Western trucks from transiting across the Russian territory. The ban, which applies to vehicles carrying goods, comes into force immediately and applies to countries which have applied similar restrictions against Russia.

Authorities in Montenegro have detained 38 people, mainly Russian nationals, on suspicion of espionage, Montenegrin daily Pobjeda reported on Thursday, citing unidentified sources. Earlier in the day, Prime Minister Dritan Abazovic said on a live broadcast of a cabinet ession that an "international operation" with foreign partners and the state prosecutor's office was underway to preserve the country's interests, but he did not elaborate.Montenegro, a NATO member and an candidate for membership in the European Union, has joined international sanctions against Russia over its invasion of Ukraine. It has expelled Russian diplomats in the past.

The Finnish government on Thursday said it would significantly limit passenger traffic on Finland’s border with Russia, banning Russian citizens traveling with tourist visas from entering the Nordic country, effective from Friday..  “The decision in principle aims to completely prevent Russian tourism to Finland and the related transit through Finland,” Foreign Minister Pekka Haavisto said during a news conference. The government justified its decision by saying that continued arrivals of Russian tourists in Finland is endangering the country’s international relations. It didn’t specify further.