Winter is coming and Russia is tightening the gas noose, but Europe appears woefully under-prepared

Winter is coming and Russia is tightening the gas noose, but Europe appears woefully under-prepared

Even if the EU member nations were to stockpile gas to 90 percent of their capacity by October 1 — the start of Europe's winter heating season — supply disruptions will occur. It might take months for Europe to recover if Russia decides to cut off gas supply entirely.

Russia's Gazprom said on Monday that it would further reduce natural gas flows through a major pipeline to Europe to 20 percent of capacity, citing equipment repairs, the Associated Press reported. The move escalates tensions over energy supplies that are dwindling just as the continent is trying to shore up its storage for winter.
The Russian state-owned company tweeted that it would reduce the daily throughput of the Nord Stream 1 pipeline to Germany to 33 million cubic meters as of Wednesday, saying it was shutting down a second turbine for repairs. The head of Germany's network regulator confirmed the reduction.
"The halving of the nomination of NordStream1 was announced for the day after tomorrow," tweeted Klaus Mueller.

Russia’s Gazprom says it is further reducing natural gas flows through a major pipeline to Europe to 20% of capacity, citing repairs of equipment. The German government rejected the notion that technical reasons would lead to further gas reduction. https://t.co/mWut1n82k0

Natural gas is used to keep industry humming, generate electricity and heat homes in the winter, and concerns are rising about a possible recession if Europe does not save enough gas and rationing is required to get through the cold months.
Last week, a report by the International Energy Agency published a report in which it said Russia has been squeezing gas supply to other parts of Europe for months and that EU leaders should have started preparing from then.
The report, authored by IEA Executive Director Fatih Birol, laid out five immediate measures Europe must take before it is plunged into a gas winter.
Also read: Ukraine works to resume grain exports, flags Russian strikes as risk
Basically, the IEA suggests that European nations resort to: 1) Auction platforms to incentivise EU industrial users to reduce demand; 2) Minimise gas use in the power sector by "temporarily increasing coal and oil-fired generation " and "nuclear power where it is politically acceptable and technically feasible"; 3) Enhance coordination among gas and power agencies across Europe to streamline consumption; and 5) Reduce household demand by putting in place regulations.
" In my view, it is much better to take steps now to prepare for winter than to leave the well-being of hundreds of millions of people and European economies at the mercy of the weather or, even worse, to give unnecessary extra leverage to President Vladimir Putin of Russia," Birol wrote in the report.
To highlight how dire the situation is, Birol says in the report that even if the EU member nations were to stockpile gas to 90 percent of their capacity by October 1 — the start of Europe's winter heating season — supply disruptions will occur. It might take months for Europe to recover if Russia decides to cut off gas supply entirely. 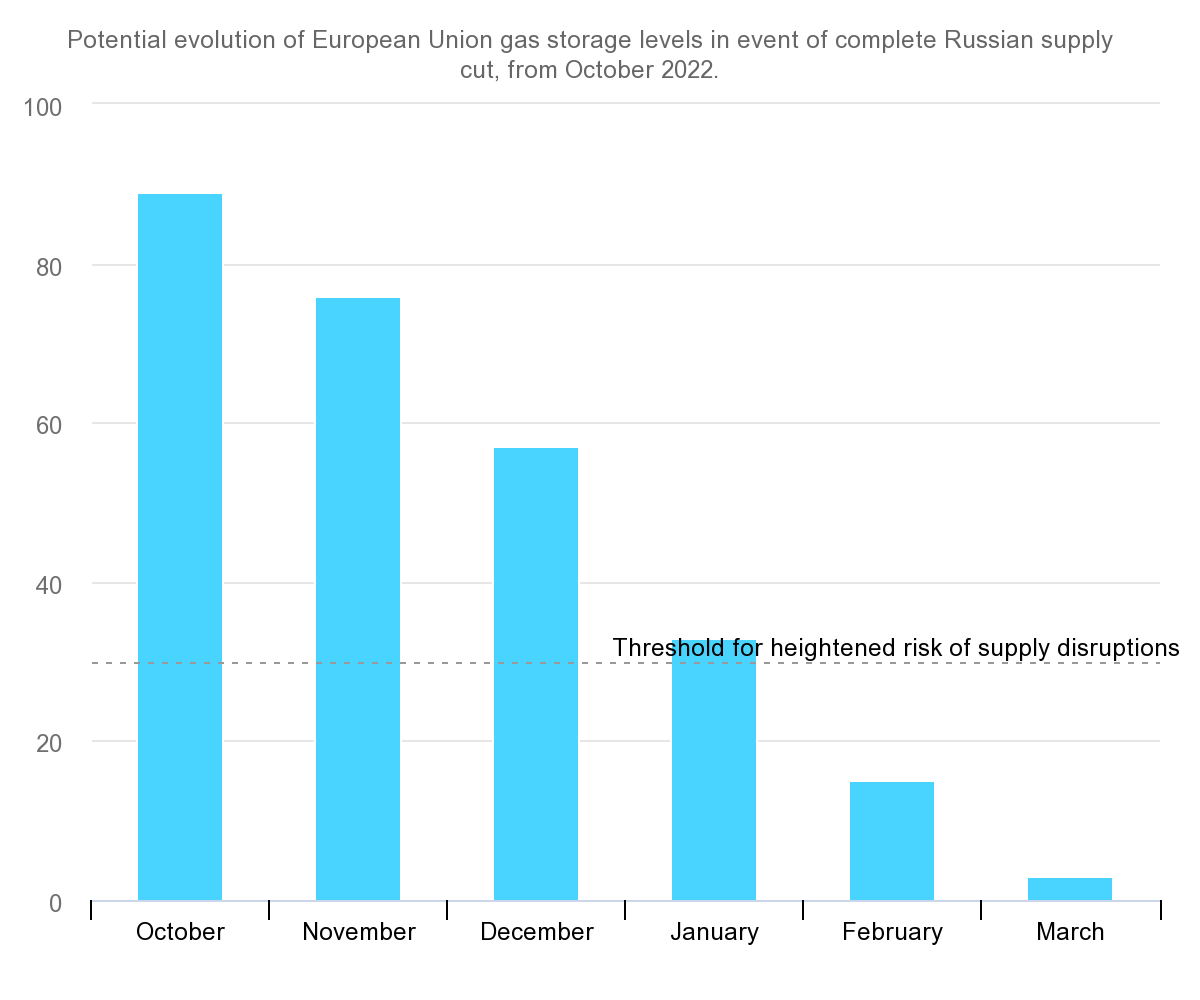 (Source: International Enegry Agency)
But, the report added, getting to that 90 percent cutoff carries with it a lot of "ifs" — "if gas supplies from Norway and Azerbaijan flow at maximum capacity, if deliveries from North Africa stay close to last year’s levels, if domestic gas production in Europe continues to follow recent trends, and if inflows of LNG increase at a similar record rate as they did in the first half of this year".
"This winter could become a historic test of European solidarity – one it cannot afford to fail – with implications far beyond the energy sector. Europe may well be called upon to show the true strength of its union," Birol wrote in the report.
Gazprom initially reduced the gas flow through the Nord Stream 1 pipeline by 60 percent in mid-June, citing alleged technical problems involving the part that partner Siemens Energy sent to Canada for overhaul and couldn't be returned because of sanctions over Russia' s invasion of Ukraine.
Germany has repeatedly rejected Gazprom's technical explanations for gas reductions, saying it was only a pretext for the Kremlins political decision to sow uncertainty and further push up energy prices.
Also read: Ukraine says Russian missiles hit Odesa port; landmark grain deal at risk
Check out our in-depth Market Coverage, Business News & get real-time Stock Market Updates on CNBC-TV18. Also, Watch our channels CNBC-TV18, CNBC Awaaz and CNBC Bajar Live on-the-go!