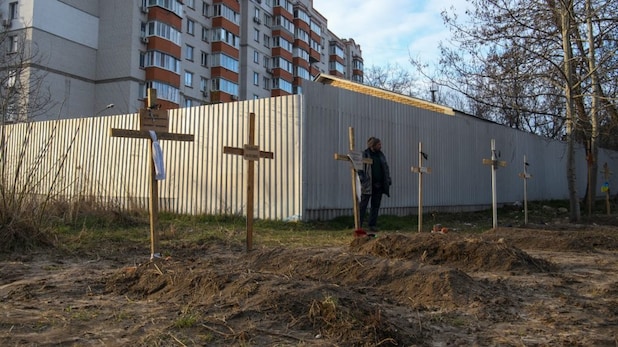 Russia-Ukraine war Highlights: Ramzan Kadyrov, the powerful head of Russia's republic of Chechnya, said early on Monday that there will be an offensive by Russian forces not only on the besieged port of Mariupol but also on Kyiv and other Ukrainian cities. "There will be an offensive ... not only on Mariupol but also on other places, cities and villages. Luhansk and Donetsk - we will fully liberate in the first place and then take Kyiv and all other cities," Kadyrov said in a video posted on his Telegram channel. Catch highlights of the Russia-Ukraine War here:

And with that, we wrap up today's coverage of the ongoing conflict in Ukraine. Thank you for joining us today, and do not forget to return tomorrow when CNBC-TV18 resumes live coverage of the Russia-Ukraine war. Good night.

Russia's ambassador to Poland on Monday accused the Polish authorities of seizing Russian diplomatic property in Warsaw as the two countries' already fraught relations have soured further over Moscow's military campaign in Ukraine. Ambassador Sergey Andreev was referring to a decrepit Communist-era apartment building that Warsaw's mayor, Rafal Trzaskowski, said would be used to house Ukrainian refugees fleeing Russia's military intervention in their country. "This morning, bailiffs came to our diplomatic property at 100 Sobieskiego Street in Warsaw and ordered the transfer of the building to the Polish state treasury on behalf of Warsaw City Hall," Russia's RIA news agency quoted Andreev as saying. "Polish representatives cut off the locks to the gate and ... have essentially occupied the facility." Trzaskowski wrote on Twitter on Monday that the property, which used to house Soviet diplomats and is known to locals as Szpiegowo ("Spyville"), had officially been transferred to the city. Poland's foreign ministry did not immediately respond to a request for comment on the Russian ambassador's statement.

US President Joe Biden on Monday said that he was pleased to speak to Prime Minister Narendra Modi in a virtual meeting. It was the first of its kind interaction between the two leaders that would coincide with the maiden India-US 2+2 dialogue under the Biden administration. Welcoming India's humanitarian support for the people in Ukraine, Biden said that India and the US will continue close discussions on the war in Ukraine.

Tap below to read more

Apr 11, 2022 10:01 PM
US President Biden speaks to PM Modi; says will continue close discussions on Russia-Ukraine war
Terming the dialogue a key to making the relationship between India and the US stronger, Biden said that both countries have the same views on global challenges including COVID- 19 and the root of…
Apr 11, 2022 10:01 PM

Three Russian regions bordering Ukraine announced they were stepping up security measures on Monday over what they said were "possible provocations" from the Ukrainian side. Moscow, which sent thousands of troops into Ukraine in what it called a "special military operation," has accused Ukraine of targeting its border regions, including by striking a fuel depot in the city of Belgorod earlier this month. The authorities in the Belgorod, Voronezh and Bryansk regions announced they were boosting security and urged citizens to be more vigilant. Another region bordering Ukraine, Kursk, was the first to announce similar measures on Sunday.

Palladium prices hit a more than two-week high on Monday on supply concerns following a recent suspension on trading of the metal sourced from Russia in the London hub, while gold was boosted by inflation fears. Palladium XPD= rose nearly 2% to $2,473.40 per ounce by 11.11am ET (1511 GMT), having earlier jumped 5 percent to hit a peak since March 24 at $2,550.58. Platinum XPT= rose 0.6 percent to $980.42. Newly refined Russian platinum and palladium was suspended from trading in London from Friday, denying access to the metals' biggest trade hub because of the conflict in Ukraine.

The mayor of Warsaw says a disputed compound administered by Russia's diplomatic mission is being taken over by the city and will be made available to the Ukrainian community. Mayor Rafal Trzaskowski was at the site Monday and said that a bailiff had entered the two apparently empty buildings, dubbed spyville by Warsaw residents, to check their condition and to mark them as seized by the Town Hall. It is very symbolic that we are closing this procedure of many years now, at the time of Russia's aggression on Ukraine, Trzaskowski said on Twitter. Russia's Embassy, which had the tall apartment blocks built in the 1970s, has been refusing court orders to pay lease or to hand it over. Once busy, the buildings became empty in the 1990s, after Poland shed its communist rule and dependence from Moscow and after the Soviet Union dissolved. Ever since, Poland has been saying that lease on the plot of land had expired and demanded it be returned.

Ukrainian President Volodymyr Zelenskyy said Saturday that he is committed to pressing for peace despite Russian attacks on civilians that have stunned the world, and he renewed his plea for more weapons ahead of an expected surge in fighting in the country’s east. He made the comments in an interview with The Associated Press a day after at least 52 people were killed in a strike on a train station in the eastern city of Kramatorsk, and as evidence of civilian killings came to light after Russian troops failed to seize the capital where he has hunkered down, Kyiv.“No one wants to negotiate with a person or people who tortured this nation. It’s all understandable. And as a man, as a father, I understand this very well,” Zelenskyy said. But “we don’t want to lose opportunities, if we have them, for a diplomatic solution.”

Russia's communications regulator on Monday demanded Google take immediate steps to remove threats against Russian users from its platforms. "Roskomnadzor sent a demand to the American IT company Google LLC to immediately take measures to exclude statements of threats against Russian users from the company's services", the regulator, known as Roskomnadzor, said in a statement.

Italy has seized properties worth some 105 million euros ($114.45 million) owned by Russian former Formula One driver Nikita Dmitrievich Mazepin and his oligarch father, two police sources told Reuters on Monday. The operation targeted a villa — known as Rocky Ram — located in the north of the island of Sardinia. It is part of broader efforts aimed at penalising wealthy Russians linked to President Vladimir Putin after the Feb. 24 invasion of Ukraine by Moscow. There was no immediate comment from Mazepin's PR manager. Mazepin — who was fired in March by US-owned F1 team Haas — has been included in an EU sanctions list along with his father, Dmitry, who the European Union's official journal described as a member of president Vladimir Putin's closest circle.

North Korea's minister of foreign affairs on Monday denounced last week's suspension of Russia from the UN Human Rights Council, calling it an "unreasonable act" led by the United States and the West to maintain political hegemony. The US-led push to suspend Russia from the UN body over reports of "gross and systematic violations and abuses of human rights" garnered 93 votes in favor, while 24 countries voted no and 58 countries abstained, prompting Moscow to announce it was quitting the body. "What the US is after... is to isolate the independent countries, and forces challenging them at the international arena, so as to maintain its illegal and inhumane US-led hegemonic order," the minister said, according to a statement carried by state news agency KCNA. The statement didn't name the minister. Noting that North Korea had opposed the adoption of the "double-standard" resolution, the minister said international organizations should not be "abused" as a means for the United States to put political pressure on countries.

Croatia on Monday told 24 Russian embassy staff to leave over Russia's invasion of Ukraine and "brutal aggression", the foreign ministry said in a statement, following similar moves by other EU countries. The 24 included 18 diplomats, it said. The ministry said that the Russian ambassador was summoned in a protest over the "brutal aggression on Ukraine and numerous crimes committed (there)". "The Russian party was informed about the reduction of administrative-technical staff of the Russian Federation's embassy in Zagreb," the statement said

Russia will not pause military operation in Ukraine for peace talks

Russia will not pause its military operation in Ukraine for subsequent rounds of peace talks, Russian Foreign Minister Sergey Lavrov said on Monday. Russian officials say peace talks with Ukraine are not progressing as rapidly as they would like, and have accused the West of trying to derail negotiations by raising war crimes allegations against Russian troops in Ukraine, which Moscow denies. Speaking in an interview with Russian state television, Lavrov said he saw no reason not to continue talks with Ukraine but insisted Moscow would not halt its military operation when the sides convene again. Lavrov said that President Vladimir Putin had ordered to suspend military action during the first round of talks between Russian and Ukrainian negotiators in late February but that Moscow's position had changed since. "After we became convinced that the Ukrainians were not planning to reciprocate, a decision was made that during the next rounds of talks, there would be no pause (in military action) so long as a final agreement is not reached," Lavrov said.

Ukraine said on Monday that tens of thousands of people have likely been killed in Russia's assault on Mariupol and Russian forces have slowed down evacuations from the besieged southeastern city, where conditions are desperate. "Mariupol has been destroyed, there are tens of thousands of dead, but even despite this, the Russians are not stopping their offensive," President Volodymyr Zelenskiy said in a video address to South Korean lawmakers. The head of the Russia-backed self-proclaimed Donetsk People's Republic, Denis Pushilin, told Russia's RIA news agency on Monday that more than 5,000 people may have been killed in Mariupol. He said Ukrainian forces were responsible. Petro Andryushchenko, an aide to the mayor of Mariupol, said on the Telegram messaging service that numbers of people leaving the city had fallen, not because people did not want to escape but because Russian forces had slowed pre-departure checks. Around 10,000 people were awaiting screening by Russian forces, he said. Russia does not allow military personnel to leave with civilian evacuees. There was no immediate comment from Moscow, which has previously blamed Ukraine for blocking evacuations.