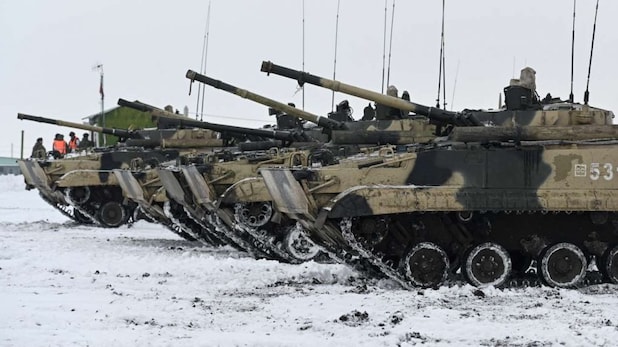 Russia-Ukraine conflict highlights: As Russia pulls back some troops from its border along Ukraine, the Western world is breathing a sigh of relief. Even as tensions simmer in Ukraine, the White House is exercising caution and market sentiments around the world seem to be improving. Read on to know all about the Russia-Ukraine conflict that reached an inflection point with European stability and the future of East-West relations hanging in the balance

With that it's a wrap to the LIVE updates on the Russia-Ukraine conflict for today. For more top stories from India and around the world, stay logged on to CNBCTV18.com.

Click here to stay updated on the latest news and updates from the Russia-Ukraine crisis.

As Russia is withdrawing it forces surrounding Ukraine, the Indian Embassy in Kyiv said that it was monitoring the situation and issued some FAQs for Indian citizens. Reports suggest that the Indian government was planning to increase the number of flights from the country to ensure that safety of its citizens. Meanwhile, NATO has urged Moscow to prove it was pulling back its forces and claimed that there were signs of more troops being on their way to the Ukrainian border. Britain joined the United States in saying it had yet to be convinced the pullout was real, while in Ukraine, the defence ministry said an unprecedented cyberattack was into its second day. Russia said it had nothing to do with any attack.

Feb 16, 2022 5:14 PM
Ukraine crisis: Russia continues their military build-up, says NATO Secretary General
Amid a much-publicized troop withdrawal by the Russians from the Ukrainian border, the NATO Secretary-General Jens Stoltenberg has cautioned the world that the situation is still tense as Moscow still…
Feb 16, 2022 3:58 PM

The Kremlin had denied it had anything to do with Tuesday’s cyberattack on Ukraine, which hit websites at the country’s defence ministry and armed forces as well as two state banks. Ukraine blamed Russia for the attack but Kremlin spokesman Dmitry Peskov denied those claims. Speaking to reporters, Peskov said, “We do not know anything. As expected, Ukraine continues blaming Russia for everything. Russia has nothing to do with any DDOS attacks."

Both resumed service later on Tuesday but the military sites remained inaccessible hours after the initial reports of the attack emerged.

Rajya Sabha MP and and Deputy Leader of Shiv Sena, Priyanka Chaturvedi has urged the Ministry of External Affairs to facilitate the evacuation of Indians, especially students stranded in Ukraine.

In a series of tweets she said, "Indian students are facing difficulties in leaving the country following the Indian government’s advisory to return to India, temporarily. Flights booked are being cancelled while many others are unable to afford tickets back home as the air tickets prices are soaring."

"There are approximately 20,000 Indian students stranded waiting for further concrete instructions from the Indian embassy. While the US has started to evacuate its people, there is no clarity coming from the Indian Embassy or GoI regarding evacuation protocol."

"We have a proactive @meaindia as well as VM @DrSJaishankar ji, hence I urge them to provide concrete instructions and facilitate the process of evacuation of Indian citizens, especially students from Ukraine before the situations takes a turn for worse."

Despite Russian claims that it has been calling back troops, NATO has accused Russia of increasing the number of troops at the Ukrainian border.

NATO defense ministers are due to meet in Brussels today to discuss what the military alliance has called “the most serious security crisis we have faced in Europe for decades.”

Speaking to reporters ahead of the meeting on Wednesday, NATO chief Jens Stoltenberg said it “remains to be seen whether there is a Russian withdrawal. So far, we have not seen any de-escalation on the ground. On the contrary it appears that Russia continues their military buildup,” he said.

Stoltenberg added that Russia has “always moved forces back and forth,” so footage that shows movement of forces and tanks “does not confirm a real withdrawal.” He also said NATO allies “remain ready to engage with Russia.”

Discussions underway to increase number of flights to India; Control Rooms setup to respond to queries in the Indian Embassy in Kyiv

Embassy of India in Kyiv issued an advisory on February 15 for Indian nationals in Ukraine.

The Embassy continues to monitor developments. We are aware that many Indian students are presently in Ukraine, and their families are anxious about their wards, particularly about getting flights to India. Discussions are underway with civil aviation authorities and various airlines on how to increase the number of flights between India and Ukraine. Control Rooms in the Embassy as well as in the Ministry of External Affairs are being setup to respond to queries of Indian nationals in Ukraine and their families in India.

The statement issued on Facebook reads, "The official web portal of the Ministry of Defense of Ukraine has suffered an unprecedented DoS attack, which is still ongoing. The attack is aimed at the maximum load of server powers on which the site works.
​
The attackers probably knew the site was protected from classic DDoS attacks, so they managed to find vulnerable locations in the site code itself. We can note that they, unfortunately, managed to do it.

Our specialists, supporting all entities involved in cybersecurity, carried out additional security settings and separate technical work for restoring the regular functioning of the web portal.

We were also immediately offered support to US partners, providing technical consultations and additional security services, which once again confirm political agreements for cybersecurity cooperation reached back in November and in 2021.

Before resuming the site, our specialists found out the reasons for its functioning breach, coordinated their actions with the NCCC RNBO, SBU, State Special Union, as well as with specialists of other structures who also suffered attacks. We have an understanding of the nature of the attack: the invaders did not break anything, did not try to download the channel or stop the provider, but sent many specific requests to the site to overload the available server capacity.

Our experts, understanding that the site could not only be subjected to other similar DoS attacks, but also DDoS attacks, have directed all site traffic through an additional security service located in the United States. It is due to the need for global access infrastructure updates, the Ministry of Defense website may seem unavailable for some time, but after a final DNS server update, it will be functioning steadily.

Such a cyber attack on the website of the Ministry of Defense of Ukraine gave us the opportunity to strengthen the cyberzahist site and improve close cooperation both with foreign partners and between colleagues from different Ukrainian agencies.

The Ministry of Defense of Ukraine has no excessive tragism, but it is keenly aware that the attacks will continue and will sometimes lead to a temporary violation of its work, at least until the website is professionally updated.

Actually, the website software update is scheduled and will take place as planned.

Amid the de-escalation of tensions with Russia pulling back its troops from the border, all eyes are once again on the issue that is at the heart of what led to a war-like situation in the region- Ukraine has been pining for a NATO (North Atlantic Treaty Organization) membership for the past 14 years, like it's other former Soviet Union cousins- Latvia, Estonia and Lithuania.

But for Russia, Ukraine is different as it has been a part of the Russian empire for the better part of its existence and it became independent only in 1991 when USSR itself broke up.

You can read the full story below.

Feb 16, 2022 2:39 PM
Russia-Ukraine tensions de-escalate; experts weigh in on geopolitical implications and road ahead
Amid the de-escalation of tensions with Russia pulling back its troops from the border, all eyes are once again on the issue that is at the heart of what led to a war-like situation in the region-…
Feb 16, 2022 2:37 PM

Speaking in the European parliament, the European commission president Ursula von der Leyen said, "I think diplomacy has not yet spoken its last words and we saw signs of hope yesterday but now deeds have to follow those spoken words."

Von der Leyen, a former German defence minister, said Russia was threatening Ukraine because it was today a free, independent and sovereign state.

"The ideas of spheres of influence are ghosts of the last century. This crisis is about Ukraine but it is also about much, much more. It is about what it means to be an independent free nation in the 21st century."

On the Kremlin’s apparent announcement of a withdrawal of troops and hardware from the Ukrainian border, and the vote in the Duma in support of recognition of Russian-controlled separatist states of Donetsk and Luhansk, Von der Leyen said: "I truly hope that the Kremlin will decide not to unleash further violence in Europe but yesterday russia was certainly sending conflicting signals. We are hoping for the best but we are prepared for the worst. We now have two distinct futures ahead of us: in one the Kremlin decides to wage war against Ukraine with massive human costs, something we thought we had left behind after the tragedies of the 20th century. Moscow’s relations with us would be severely damaged, tough sanctions would kick in with dire consequences on the Russian economy and its prospects of modernisation.

But another future is possible. A future in which Russia and Europe cooperate on shared interests. A future where free counties work together in peace. A future of prosperity built on the fundamental principles enshrined in the UN charter and the European security architecture since the Helsinki final act. This is my aspiration and I am sure the Russian people share this aspiration too. It is now up to the Kremlin to decide but whatever path they decide to take we will stand our ground. Europe will be united on the side of Ukraine, united on the side of peace and on the side of Europe’s people. Long live Europe."

"Units of the Southern Military District (AFD), which have completed participation in tactical exercises at the Crimean peninsula, are marching to permanent locations by rail. Military echelons will deliver military equipment and servicemen to the permanent deployment points of military units." the statement from the Russian Defence Ministry reads.

Russian Defense ministry spokesman Igor Konashenkov added, "Units of the Southern and Western military districts, which have completed the task, have already started loading on rail and road transport and will start moving to their military garrisons today. Some units will march on their own as part of military columns.

In a televised statement, Ukraine's Defence Minister, Oleksii Reznikov said the latest threat assessments did not contain "anything unexpected" and were consistent with earlier views.

He said Ukrainian armed forces were keeping up a nationwide military drill, one of which would be attended by the military attaché of Belarus.

Ukraine's neighbour has assured Kyiv there is no military threat from its territory. Reznikov also said he would participate in a "virtual meeting" of all NATO defense ministers set for Thursday.