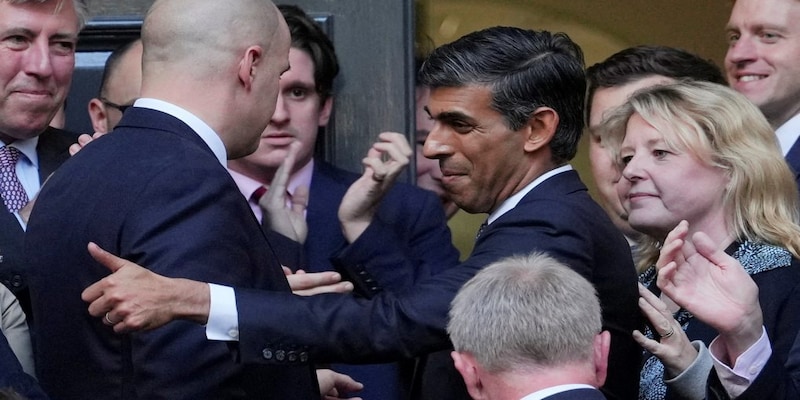 The new British prime minister, Rishi Sunak, plans to build a cabinet with both Boris Johnson and Penny Mordaunt supporters in a “government of all the talents”

Rishi Sunak, who is set to be sworn in as the Prime Minister of the United Kingdom on Tuesday, is likely to retain Jeremy Hunt as the Chancellor of the Exchequer as he sets out on the task to appoint a new cabinet.

Sunak’s appointment comes after months of infighting in the Conservative Party following the resignation of former PM Boris Johnson and the summer Tory leadership campaign in which Liz Truss came out victorious.
The challenge before Sunak now is to strike a balance between loyalists who backed him in the leadership campaigns and those who supported his rivals.
Sunak has pledged to build a “big tent” cabinet that will unite the party. He plans to build a cabinet with both Boris Johnson and Penny Mordaunt supporters in a “government of all the talents,” The Times quoted an ally as saying.
Also Read | London Eye: Rishi Sunak becoming UK PM is nothing short of a miracle
Here’s a look at the possible candidates for the major cabinet positions.
Jeremy Hunt
Hunt was appointed chancellor a week ago under Liz Truss' premiership and effectively took charge of the economic agenda. It is widely expected that he could continue to remain in the position to avoid any more jitters in the markets. Hunt is seen as a steady hand.
Sajid Javid
Sajid Javid quit Boris Johnson’s cabinet with Sunak which ultimately led to his downfall. Javid was Sunak's predecessor as chancellor. However, Javid supported Truss in the summer leadership campaign.
Kemi Badenoch
Truss had appointed Kemi Badenoch as trade secretary but she is said to have been unhappy with the role, Bloomberg reported. She backed Sunak on Sunday and is expected to get a more senior post in the new cabinet.
Also Read | Profile: Meet Rishi Sunak, the first Indian-origin British Prime Minister
Mel Stride
Mel Stride ran Sunak’s leadership campaign both times and could be rewarded with a cabinet position. He could get a top position in the Treasury such as chief secretary. Earlier, he held the position of financial secretary to the Treasury.
Penny Mordaunt and Tom Tugendhat
Mordaunt and Tugendhat are both contenders for the foreign secretary post. Mordaunt, who was Sunak’s leadership rival, could get the top job in a show of unity in the party.
Tugendhat chaired the Foreign Affairs Select Committee for five years till his appointment as security minister last month. Tugendhat has served in Iraq and Afghanistan with the Territorial Army. Prior to being an MP, Tugendhat helped set up the National Security Council of Afghanistan for the Foreign Office.
James Cleverly
Cleverly is currently the foreign secretary. He is well-liked and is likely to remain in the cabinet as a show of unity, albeit probably in a lesser role, The Guardian reported.
Suella Braverman
Braverman quit as home secretary last week, following which Grant Shapps was given the top job. While Sunak may be reluctant to move ally Grant Shapps from the post, he may bring back Braverman as the justice secretary or party chair.
Grant Shapps
Shapps could continue in the post of home secretary. Shapps is an experienced cabinet member.
Oliver Dowden and Dominic Raab
Dowden is the former co-chairman of the Conservative Party. A close ally of Sunak, Dowden helped the new PM run his campaign. He could be rewarded with the deputy PM post. Dowden is also popular among MPs. Another strong Sunak ally, Dominic Raab, could also be rewarded for his support.
Also Read | British leaders who had a brief innings as the PM
(Edited by : Abhishek Jha)
Check out our in-depth Market Coverage, Business News & get real-time Stock Market Updates on CNBC-TV18. Also, Watch our channels CNBC-TV18, CNBC Awaaz and CNBC Bajar Live on-the-go!