Rishi Sunak, Liz Truss in the final race to become UK PM as Penny Mordaunt eliminated in fifth round

Rishi Sunak, Liz Truss in the final race to become UK PM as Penny Mordaunt eliminated in fifth round 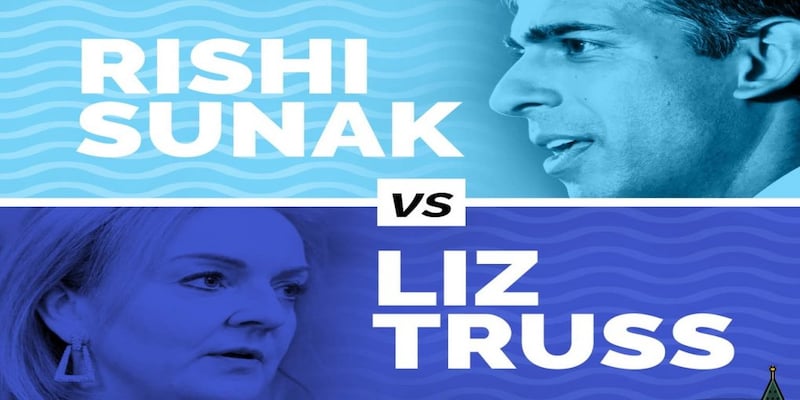 The final stretch of a weeks-long contest will pit Sunak, a former Goldman Sachs banker who has raised the tax burden towards the highest level since the 1950s, against Truss, a convert to Brexit who has pledged to cut taxes and regulation.

Former finance minister Rishi Sunak and foreign secretary Liz Truss will battle it out to become Britain’s next prime minister after they won the final lawmaker vote, setting up the last stage of the contest to replace Boris Johnson.

Sunak has led in all rounds of the voting among Conservative lawmakers, but it is Truss who seems to have gained the advantage so far among the 200,000 members of the governing party who will ultimately choose the winner.
The final stretch of a weeks-long contest will pit Sunak, a former Goldman Sachs banker who has raised the tax burden towards the highest level since the 1950s, against Truss, a convert to Brexit who has pledged to cut taxes and regulation. 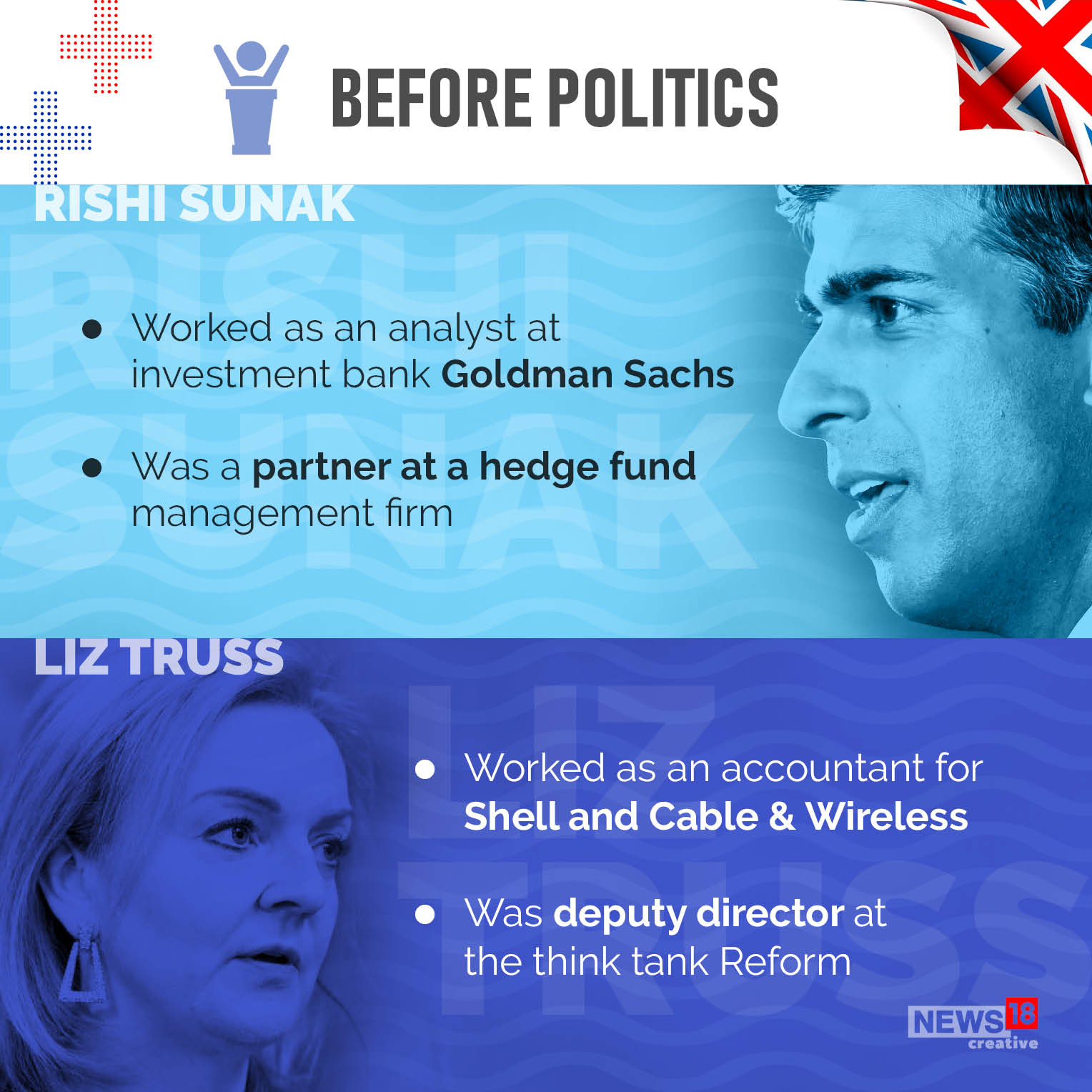 Also read:
Who are Liz Truss and Penny Mordaunt, Rishi Sunak’s rivals in race to 10 Downing Street?
Liz Truss attended West Primary School in Paisley, Renfrewshire, and Roundhay School. She studied politics, philosophy and economics at Merton College, Oxford, where she held the post of president of the Oxford University Liberal Democrats.
Sunak was educated at Winchester College. He then studied philosophy, politics, and economics (PPE) at Lincoln College in Oxford before earning an MBA as a Fulbright Scholar from Stanford University in California. 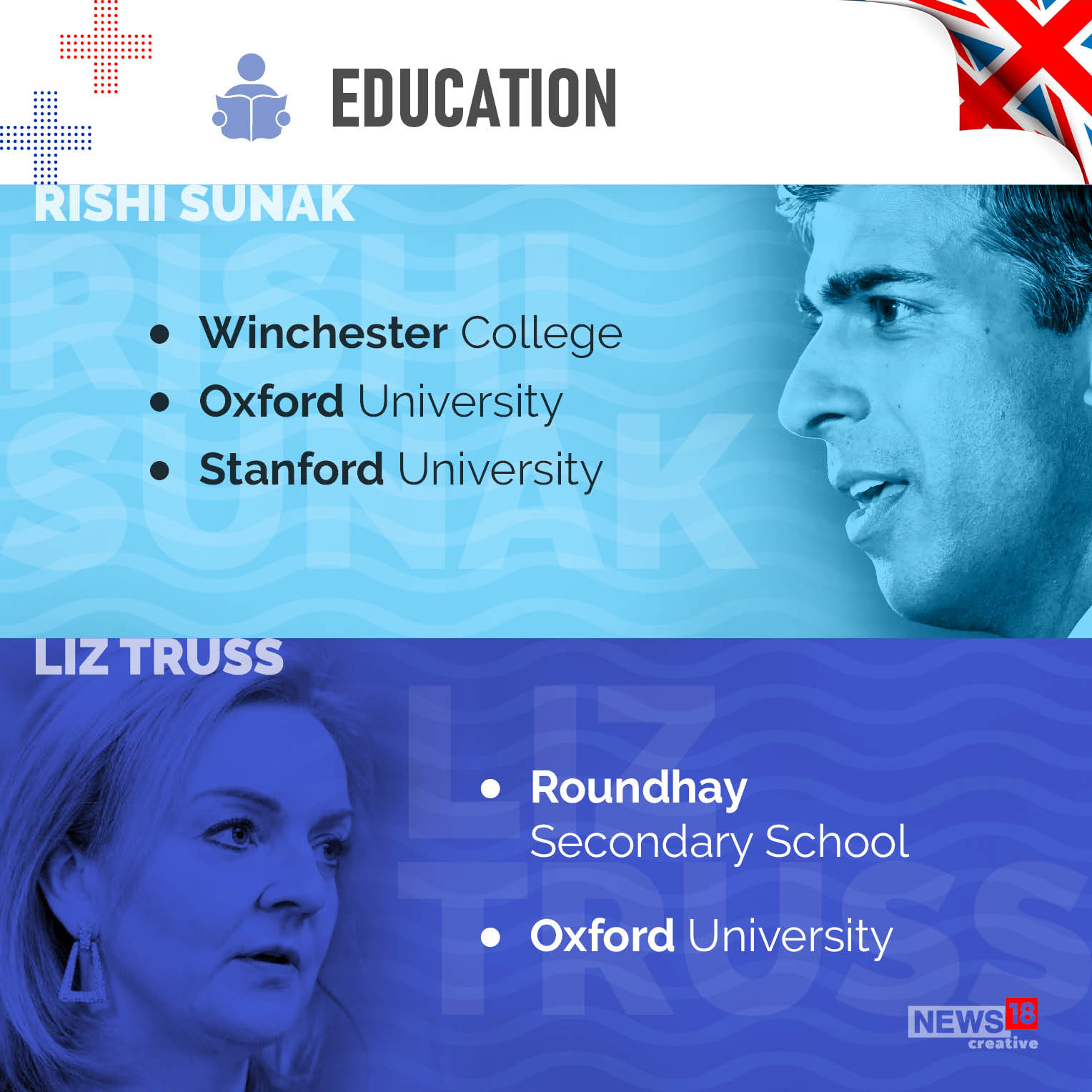 Whoever triumphs when the result is announced on September 5 will inherit some of the most difficult conditions in Britain in decades. Inflation is on course to hit 11 percent annually, growth is stalling, industrial action is on the rise and the pound is near historic lows against the dollar.
Britain under Johnson, and aided by Truss, also took a hard line against Brussels in its post-Brexit negotiations around Northern Ireland, drawing legal action from the European Union and threatening future trade ties. Eleven candidates originally put their names forward, but in a fifth and final ballot of Conservative lawmakers on Wednesday, the junior trade minister Penny Mordaunt was eliminated. Sunak won 137 votes, versus Truss’s 113 and Mordaunt’s 105.
Polls show Truss would beat Sunak in the party members’ contest, opening up the chance that the party elects a leader who was not the most popular choice for lawmakers at Westminster. 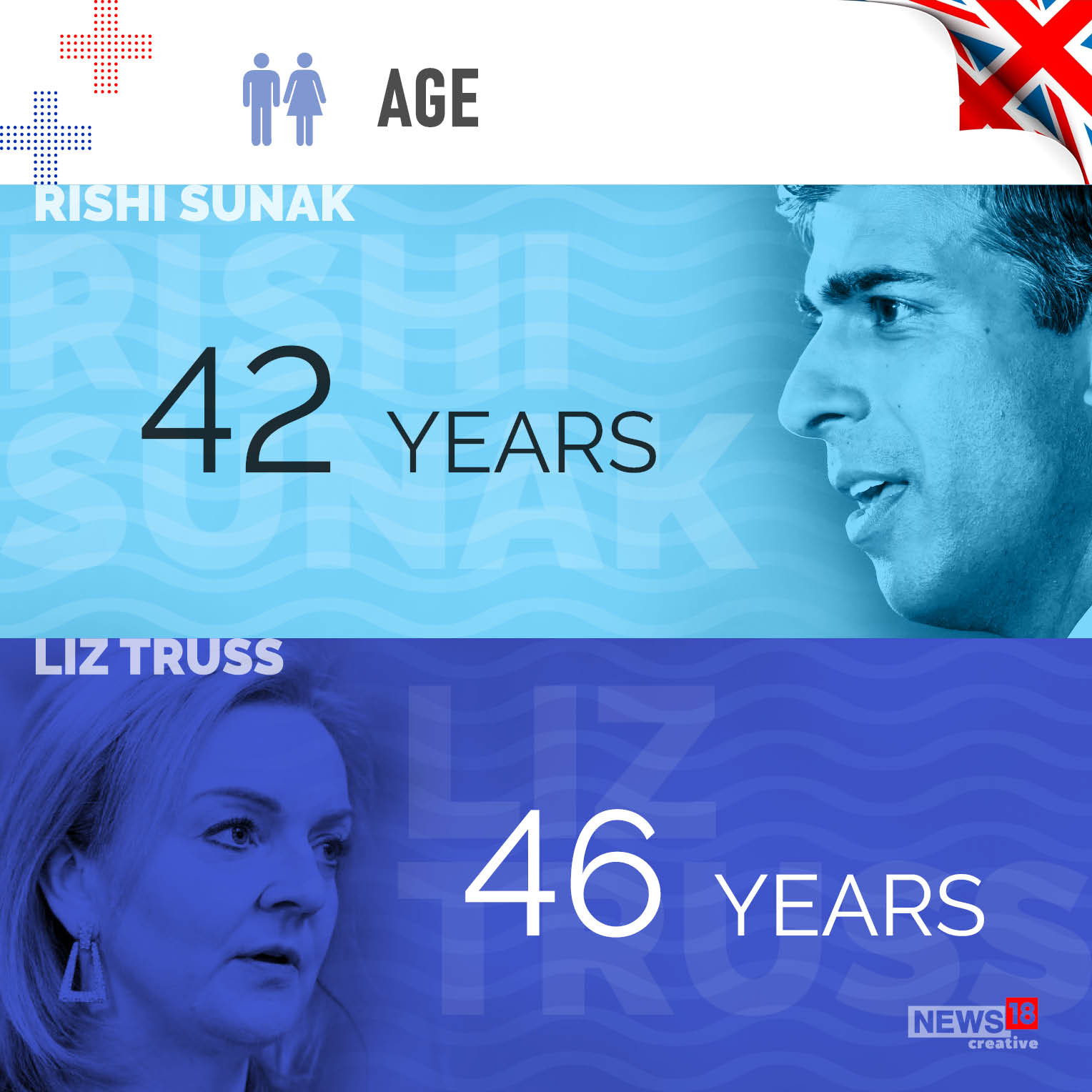 Truss thanked her supporters. "I’m ready to hit the ground from day one," she said on Twitter.
Sunak said on Twitter: "Grateful that my colleagues have put their trust in me today. I will work night and day to deliver our message around the country".
Mordaunt, who was just eight votes behind second-placed Truss, called on the party to unite after an often ugly leadership contest so far.
"Politics isn’t easy. It can be a divisive and difficult place," she said in a statement. "We must all now work together to unify our party and focus on the job that needs to be done". 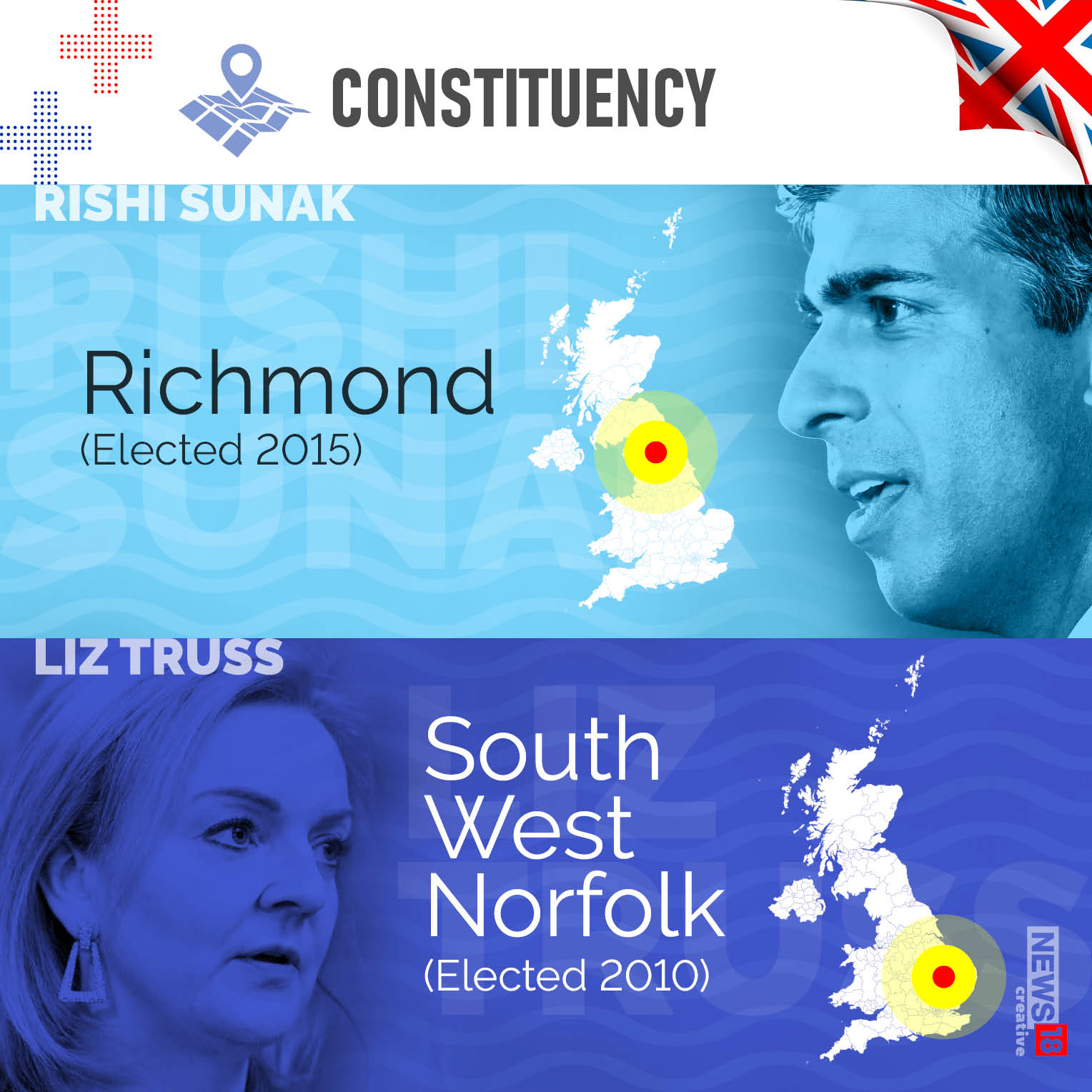 HUSTINGS
The two finalists will now start weeks of hustings up and down the country before the party’s membership.
Also read: From Penny Mordaunt to Rishi Sunak, these 8 British PM candidates are promising tax cuts and women empowerment
"This has been one of the most unpredictable contests to be the next Conservative leader in recent history," said Chris Hopkins, the political research director at the polling company Savanta ComRes. "This has been very different to recent contests where you have had one clear favourite run away with it".
The vitriol between the candidates also poses the question of how well any new leader will be able to govern, with Johnson still popular with many in the party and country, and the party increasingly split between its various factions.
Johnson was forced to resign this month after he lost the support of his lawmakers following months of scandals, including breaches of COVID-19 pandemic lockdown rules.
Sunak, who helped steer the economy through the pandemic, might not find a forgiving crowd among party members with many blaming him for triggering Johnson’s downfall with his resignation earlier this month.
He has also faced criticism on everything from his record in government to his wife’s wealth.
Truss might also struggle at the hustings against Sunak, who is more relaxed in public appearance. On Sunday she admitted she might not be "the slickest presenter" but "when I say I’ll do something, I do it". 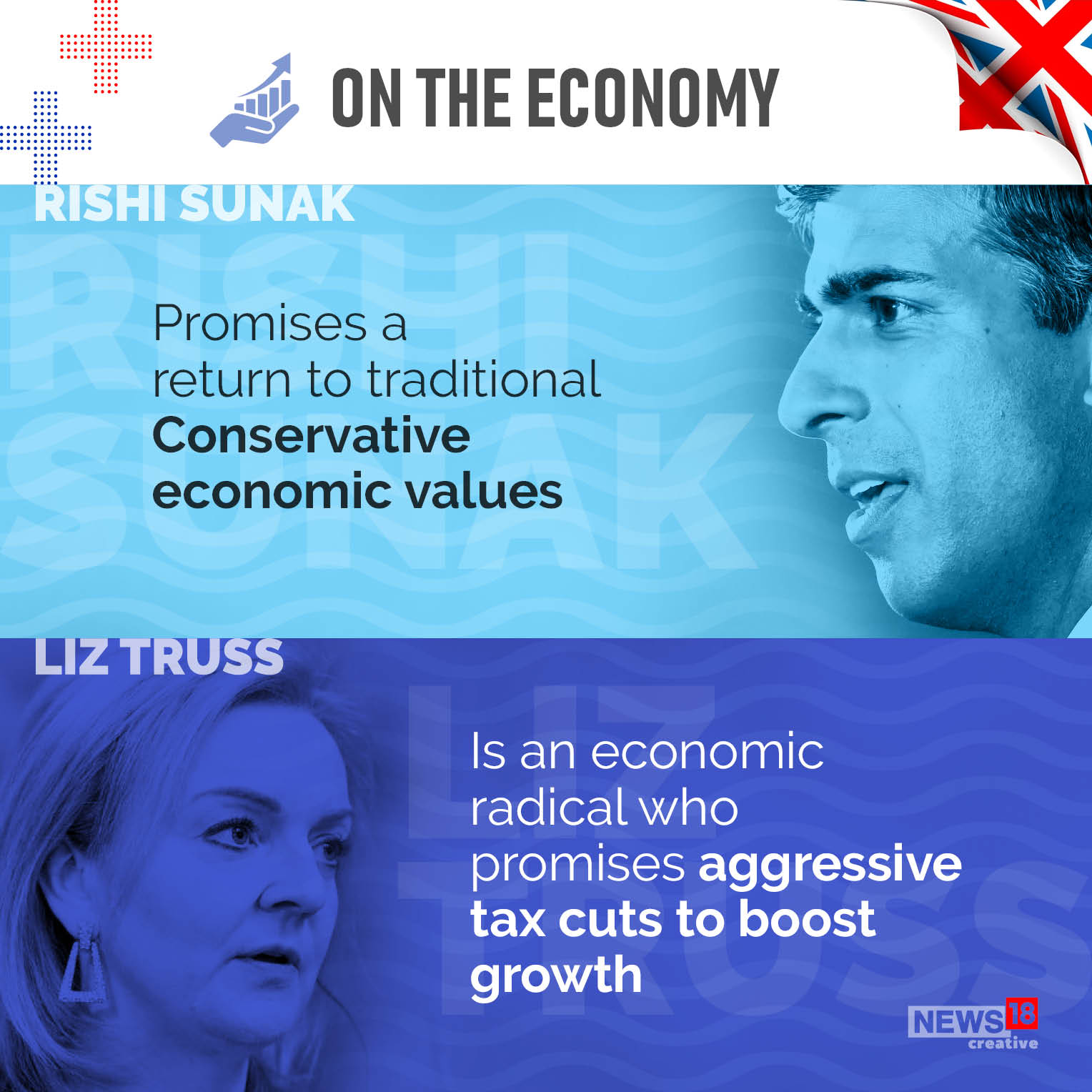 The race has so far focused on pledges, or non-pledges, to cut taxes, at a time when many parts of the state are struggling to function, along with defence spending, energy policy, Brexit and social issues such as transgender rights. With both candidates serving in senior jobs in Johnson’s government, they may also be limited in their ability to pitch themselves as a fresh start. 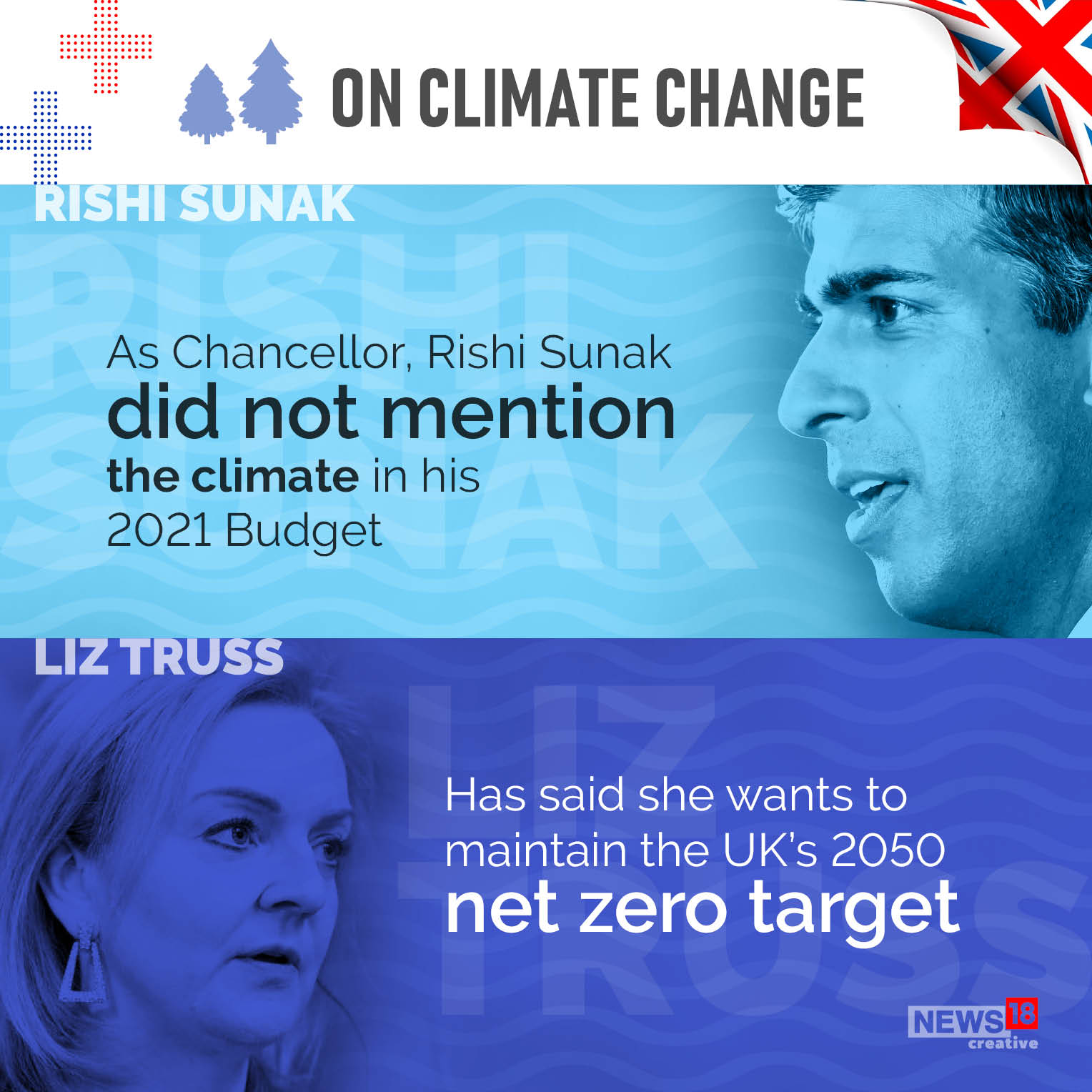 Pollster Hopkins said a new party leader "normally gets a small bump in the polls, but it will be an uphill battle to claw support back because this government has been badly damaged".
(Additional reporting by Kylie MacLellan, Alistair Smout and Kate Holton; Editing by Andrew Cawthorne and Alison Williams and Kate Holton)
Also read: UK PM race: The rise and rise of Rishi Sunak
Check out our in-depth Market Coverage, Business News & get real-time Stock Market Updates on CNBC-TV18. Also, Watch our channels CNBC-TV18, CNBC Awaaz and CNBC Bajar Live on-the-go!