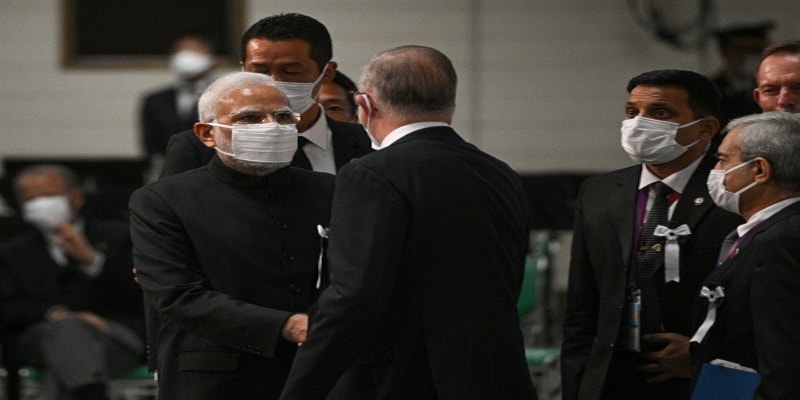 Former Japanese Prime Minister Shinzo Abe was shot dead while making a campaign speech on July 8 in the southern Japanese city of Nara. India had then observed a one-day national mourning on July 9 as a mark of respect for Abe.

Prime Minister Narendra Modi attended the state funeral of former Japanese Prime Minister Shinzo Abe in Tokyo on Tuesday. Earlier in the day, he met Japanese counterpart Fumio Kishida and conveyed his deepest condolences over the sudden demise of Abe.

"I am feeling very sad about the sudden death of former premier Abe... He took Japan-India relations to a greater level and also expanded it in many areas," Modi, who shared a close friendship with the slain Japanese leader, was quoted by news agency PTI as saying. "India is missing Shinzo Abe," he added.

Also had a useful exchange on further enhancing bilateral relations and working together towards realization of a free, open & inclusive IndoPacific. pic.twitter.com/BMsTYnQLW6— Arindam Bagchi (@MEAIndia) September 27, 2022

Kishida then thanked Prime Minister Modi for taking India-Japan ties to new heights and assured that he will continue to cooperate with him to realise the vision of a free, open and inclusive Indo-Pacific region.
PM Modi to attend Abe's funeral
Representatives from over 100 countries, including more than 20 heads of state and governments, are expected to attend Abe's funeral on Tuesday. The former prime minister reshaped Japan's foreign policy, including setting out a bold vision for a quantum leap in ties with India.
"Landed in Tokyo," PM Modi tweeted, posting photos of him while deplaning. He also posted a similar tweet in Japanese.

Abe, 67, was shot dead while making a campaign speech on July 8 in the southern Japanese city of Nara.
India observed a one-day national mourning on July 9 as a mark of respect for Abe. At a media briefing on Monday, Foreign Secretary Vinay Kwatra was quoted by PTI as saying that PM Modi will attend the state funeral ceremony at Budokan, followed by a greeting occasion at Akasaka Palace, besides meeting Prime Minister Fumio Kishida and Abe's wife Akie.
ALSO READ | Ex-Japan PM Shinzo Abe dead: A look at top world leaders who were assassinated
"The visit will be an opportunity for PM Modi to honour the memory of former PM Abe, who he considered a dear friend and a great champion of India-Japan ties," he said.  Kwatra said Modi and Abe developed a personal bond through their meetings and interactions spanning over a decade, beginning with Modi's visit to Japan in 2007 as the chief minister of Gujarat.
Meanwhile, PM Narendra Modi reportedly told Kishida, "I am confident that under your leadership, India-Japan relations will deepen further and achieve greater heights."
Tense Japan holds funeral for Abe
Tokyo was under maximum security, with angry protests opposing the funeral planned around the capital and nation. Hours before the ceremony began, dozens of people carrying bouquets of flowers queued at public flower-laying stands at nearby Kudanzaka park.
Thousands of uniformed police mobilized around the Budokan hall, where the funeral is being held, and at major train stations. Roads around the venue are closed throughout the day, and coin lockers at main stations were sealed for security. World leaders, including US Vice President Kamala Harris, were in town for the funeral.
The controversy over Abe's funeral
Opponents of the state-sponsored funeral, which has its roots in prewar imperial ceremonies, say taxpayers’ money should be spent on more meaningful causes, such as addressing widening economic disparities caused by Abe’s policies.
Prime Minister Fumio Kishida has been criticized for forcing through the costly event to honor his mentor, Abe, who was assassinated in July. There has also been a widening controversy about Abe's and the governing party’s decades-long close ties with the ultra-conservative
Kishida says the longest-serving leader in Japan’s modern political history deserves a state funeral. The government also maintains that the ceremony is not meant to force anyone to honor Abe. Most of the nation’s 47 prefectural governments, however, plan to fly national flags at half-staff and observe a moment of silence.
Opponents say Kishida’s one-sided decision, which was made without parliamentary approval, was undemocratic, and a reminder of how prewar imperialist governments used state funerals to fan nationalism. The prewar funeral law was abolished after World War II. The only postwar state funeral for a political leader, for Shigeru Yoshida in 1967, also faced similar criticism.
“Spending our valuable tax money on a state funeral with no legal basis is an act that tramples on the constitution," organizer Takakage Fujita said at a protest Monday.
About 1.7 billion yen ($11.8 million) is needed for the venue, security, transportation and accommodation for the guests, the government said.
A group of lawyers has filed a number of lawsuits in courts around the country to try to stop the funeral. An elderly man last week set himself on fire near the prime minister’s office in an apparent protest of the funeral.
In what some see as an attempt to further justify the honor for Abe, Kishida has launched a series of meetings with visiting foreign leaders in what he calls “funeral diplomacy.” The talks are meant to strengthen ties as Japan faces regional and global challenges, including threats from China, Russia and North Korea. He was to meet about 40 foreign leaders through Wednesday. No Group of Seven leaders are attending.
(With inputs from agencies)
Check out our in-depth Market Coverage, Business News & get real-time Stock Market Updates on CNBC-TV18. Also, Watch our channels CNBC-TV18, CNBC Awaaz and CNBC Bajar Live on-the-go!