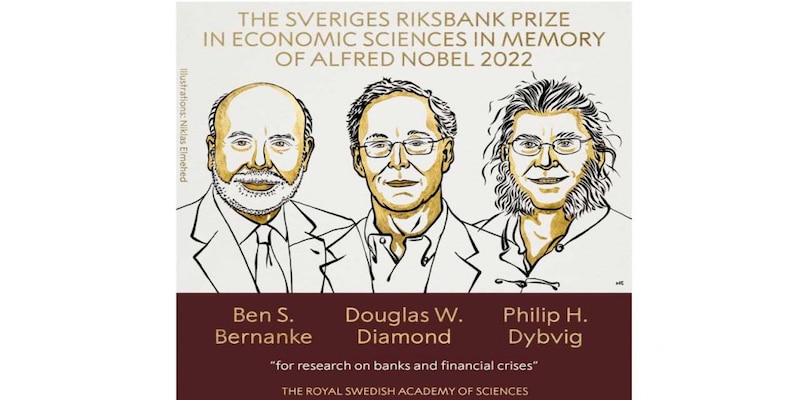 The 2022 Nobel Prize in Economic Sciences was focused on banks. The work by these three laureates "improved how society deals with financial crises".

All the three Nobel laureates significantly improved our "understanding of the role of banks in the economy, particularly during financial crises, as well as how to regulate financial markets", the Nobel Committee said on Monday.
About their work
Douglas Diamond and Philip Dybvig developed theoretical models that explain why banks exist, how their role in society makes them vulnerable to rumours about their impending collapse and how society can lessen this vulnerability.
The duo also presented a solution to bank vulnerability, in the form of deposit insurance from the government. Meanwhile, Diamond emphasised on how banks perform an important function.
"As intermediaries between savers and borrowers, banks are better suited to assessing borrowers’ creditworthiness and ensuring that loans are used for good investments," it said.
Besides, Ben Bernanke analysed the Great Depression of the 1930s and showed how bank runs were a decisive factor in the crisis becoming so deep and prolonged.
"Using historical sources and statistical methods, Bernanke’s analysis showed which factors were important in the drop in gross domestic product. He found factors that were directly linked to failing banks accounted for the lion’s share of the downturn," it said.
The work by these three laureates "reduces the risk of financial crises developing into long-term depressions with severe consequences for society, which is of the greatest benefit to us all".
Check out our in-depth Market Coverage, Business News & get real-time Stock Market Updates on CNBC-TV18. Also, Watch our channels CNBC-TV18, CNBC Awaaz and CNBC Bajar Live on-the-go!