Meet Kevin McCarthy, Trump ally who is looking to become the next US Speaker of the House

Meet Kevin McCarthy, Trump ally who is looking to become the next US Speaker of the House 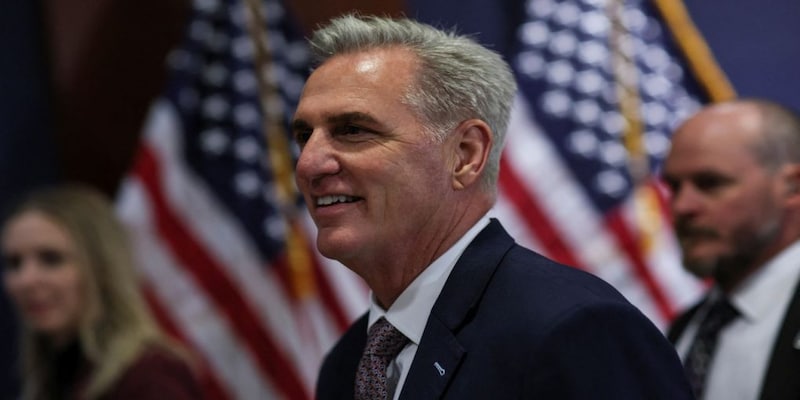 Becoming Speaker will be a massive step forward in the eight-time Congressman's career, as it will put him second in the line of succession for the US Presidency, behind US Vice President Kamala Harris, and also will make him the most powerful elected Republican in the US Congress.

More than a week after the midterm elections in the US, the Republican party are one seat shy of a simple majority in the House of Representatives. Representative Kevin McCarthy of California, a staunch Donald Trump ally and the current House minority leader, is gunning for the all-important Speaker's post and has received the Republican Parrt's nod, bid his bid is far from certain as criticism from the party's Senate Minority leader, Mitch McConnell, appeared draw some votes away. McCarthy needs 218 votes to become Speaker, but currently is assured of only 188.

McCarthy, who has been the House minority leader since 2019, wrote a letter to his colleagues on Wednesday in which he announced his intention to run for the post.

“I will be a listener every bit as much as a Speaker, striving to build consensus from the bottom-up rather than commanding the agenda from the top-down,” USA Today quoted McCarthy as saying in the letter.

Becoming Speaker will be a massive step forward in the eight-time Congressman's career, as it will put him second in the line of succession for the US Presidency, behind US Vice President Kamala Harris, and also will make him the most powerful elected Republican in the US Congress.
Also read: Donald Trump announces 2024 US presidential bid

As per forecasts, the Republicans will win at least 218 seats, the minimum required to maintain majority in the 435-seat chamber. However, the numbers are far less than the 30- to 50-seat margin that was expected earlier.

Till Tuesday night, the Republicans had secured 217 seats and the Democrats 209.

The Rise of Kevin McCarthy

Born in 1965, McCarthy hails from the small town of Bakersfield in California. He is the son of a firefighter. McCarthy is believed to have struggled with a speech impediment in his childhood. At the age of 21, McCarthy set up a restaurant business, Kevin O’s Deli. He later sold his business and paid for his college degree at California State University, Bakersfield.

Also read: Joe Biden says US would 'compete vigorously' with China, but...

McCarthy built his network among congressional Republicans and soon mastered the inner machinations of the redistricting, organising and electioneering processes, and candidate recruitment.

He also displayed astounding fundraising skills that benefited his entire caucus. McCarthy forged alliances within the Republican Party by raising funds to the tune of over $100 million since 2016, The Hindu reported.

After Trump's victory in the 2016 presidential elections, McCarthy became close to the President. He once told The Washington Post that he saw Trump pick red and pink flavours of Starbursts, a square-shaped candy fruit chews, and made sure to deliver a jar of them to the president as a gift.

McCarthy came to be known as Trump's friend and fixer with the former president often referring to him as "My Kevin" in private. In 2018, Trump backed McCarthy to lead House Republicans after they lost the majority. "We have a great man, and he's going to be hopefully a great speaker of the House," NPR quoted Trump as saying.

In 2020, after Trump lost the election to Joe Biden, McCarthy joined hundreds of candidates who openly questioned or denied the legitimacy of the presidential poll outcome.

Also read: Donald Trump files paper for 2024 US presidential election: A look at 5 ongoing cases against him

In 2022, McCarthy was mired in controversy when an audio clip of the House minority leader, obtained and reported by The New York Times, surfaced. In the clip, McCarthy expresses concerns about far-right House Republicans inciting violence against other lawmakers in the aftermath of January 6, 2021, attack on the Capitol.

McCarthy is heard repeatedly lamenting the inflammatory comments made by some Republican lawmakers, which was in stark contrast to his efforts to downplay Republicans' role in the January 6 incident.

Despite his comments, Trump backed McCarthy for House speaker in the final leg of the mid-term elections.

The former President has also been privately encouraging allies to support McCarthy’s election as the speaker, CNN reported quoting two sources familiar with the effort.

Trump views McCarthy as an asset which would benefit him should he contest in the 2024 elections.

It is McCarthy’s skill to cultivate political alliances that has become a stumbling block for the Republican representative today. McCarthy is being considered by the disparate camps within the party as being close to their political rivals. The pro-Trump Republican Freedom Caucus, which played a key role in 2015 in denying McCarthy’s first campaign for the post of Speaker — former Vice Presidential Nominee Paul Ryan was elected to the post — has once again signalled its opposition to his candidature.

Should McCarthy become speaker, it could be seen as a major win for Trump. On the other hand, it could mean a blow to Florida Governor Ron DeSantis who is a likely to run for 2024 presidential elections. Till last month, DeSantis maintained he was not looking beyond 2022, but insiders have said that DeSantis is also planning an agenda for just a two-year term, signalling an interest in a bid for the White House.