homeworld NewsHow are Nobel Laureates selected? A look at the process

How are Nobel Laureates selected? A look at the process

A nomination for the Nobel Prize may be submitted by any person who meets the nominating criteria. The nominees' names and other information about the nominations cannot be revealed until 50 years later.

The Nobel Foundation is a private institution established in 1900 that has the ultimate responsibility for fulfilling the intentions of Alfred Nobel as outlined in his will.

The Nobel Foundation is responsible for safeguarding the prize-awarding institute and representing the Nobel organisation. In the past two decades, several outreach activities have been developed to inspire and disseminate knowledge about the Nobel Prize, according to nobelprize.org.
A nomination for the Nobel Prize may be submitted by any person who meets the nominating criteria. The nominees' names and other information about the nominations cannot be revealed until 50 years later.
Who can nominate?
Nominations to most of the Nobel prizes are by invitation only. However, anyone who meets the nominating criteria can nominate the candidate.
Each year, thousands of University professors, members of academies, and previous Nobel Laureates, and members of parliamentary assemblies are asked to submit candidates for the Nobel Prize for the coming year.
After receiving the nominations, respective institutions of different fields are responsible for the selection of candidates. The process of nominating a Nobel Laureate
Process of Nomination
In his will, Alfred Nobel designated the institutions responsible for the prizes he wished to establish: Karolinska Institutet for the Nobel Prize in Physiology or Medicine, The Royal Swedish Academy of Sciences for the Nobel Prize in Physics and Chemistry, the Swedish Academy for the Nobel Prize in Literature, and a Committee of five persons to be elected by the Norwegian Parliament (Norwegian Nobel Committee) for the Nobel Peace Prize.
In 1968, the Sveriges Riksbank established the Sveriges Riksbank Prize in Economic Sciences in Memory of Alfred Nobel.
Process of selection
September: The Nobel committee invites qualified personnel to nominate extraordinary work.
January: January 31 is the deadline for submitting nominations
February: The Nobel committee screens the nominations and selects preliminary candidates.
March-May: In spring, the committee meets and consults with experts.
June-August: The Nobel committee puts together the report with the expert recommendations. 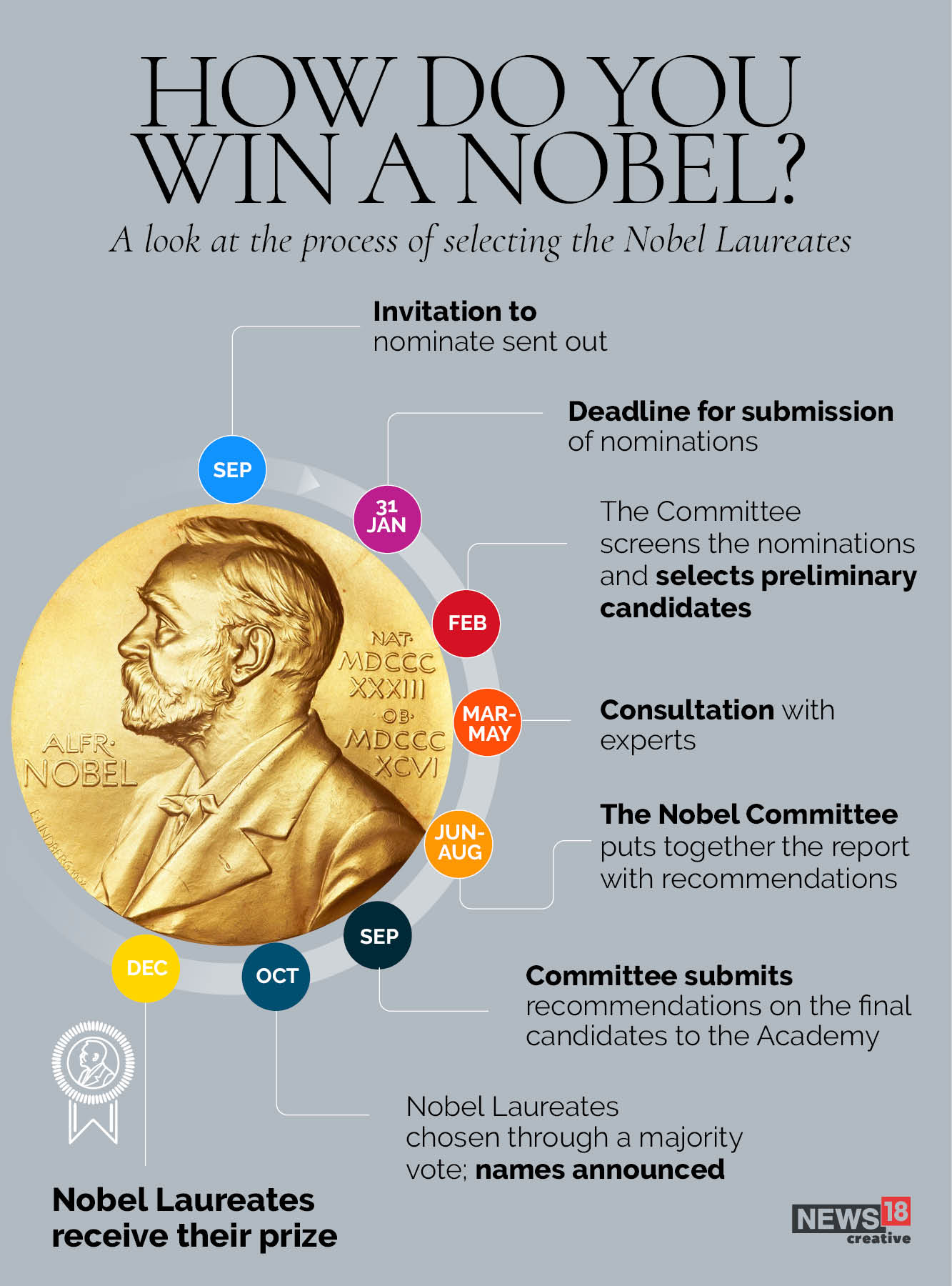 The process of selecting a Nobel Laureate
September: The Nobel committee submits the final recommendation report to the respective academies.
October: The Nobel Laureates are chosen through a majority of votes. The decision is final and without appeal. The names of the Nobel Peace Prize Laureates are then announced.
December: The Nobel Laureates receive their prizes.
On Monday, Americans Harvey J Alter and Charles M Rice, and British scientist Michael Houghton were awarded the Nobel Prize for Medicine or Physiology on Monday for the discovery of the Hepatitis C virus.
Check out our in-depth Market Coverage, Business News & get real-time Stock Market Updates on CNBC-TV18. Also, Watch our channels CNBC-TV18, CNBC Awaaz and CNBC Bajar Live on-the-go!