Former ECB chief Mario Draghi has accepted the task of forming a new Italian government, according to cnbc.com.

Italy’s president, Sergio Mattarella, earlier in the day asked the former European bank chief to form a non-political government to steer Italy through the coronavirus pandemic after last-ditch negotiations among political parties failed to produce a viable governing coalition.
Little over a year after leaving the presidency of the Frankfurt-based European Central Bank, Draghi, 73, will form the country's 67th post-war government.
For the man whose illustrious career has earned him the nickname "Super Mario", expectations could hardly be higher, with Italian financial markets rallying and the country's broadsheets posting banner headlines on "Draghi's Moment".
Moving from the hushed halls of Frankfurt's Eurotower to the mayhem of Rome's political arena, Draghi must switch from talking interest rates with fellow central bankers to negotiating cabinet posts with rabble-rousing politicians like Matteo Salvini, the head of Italy's hard-right League party. 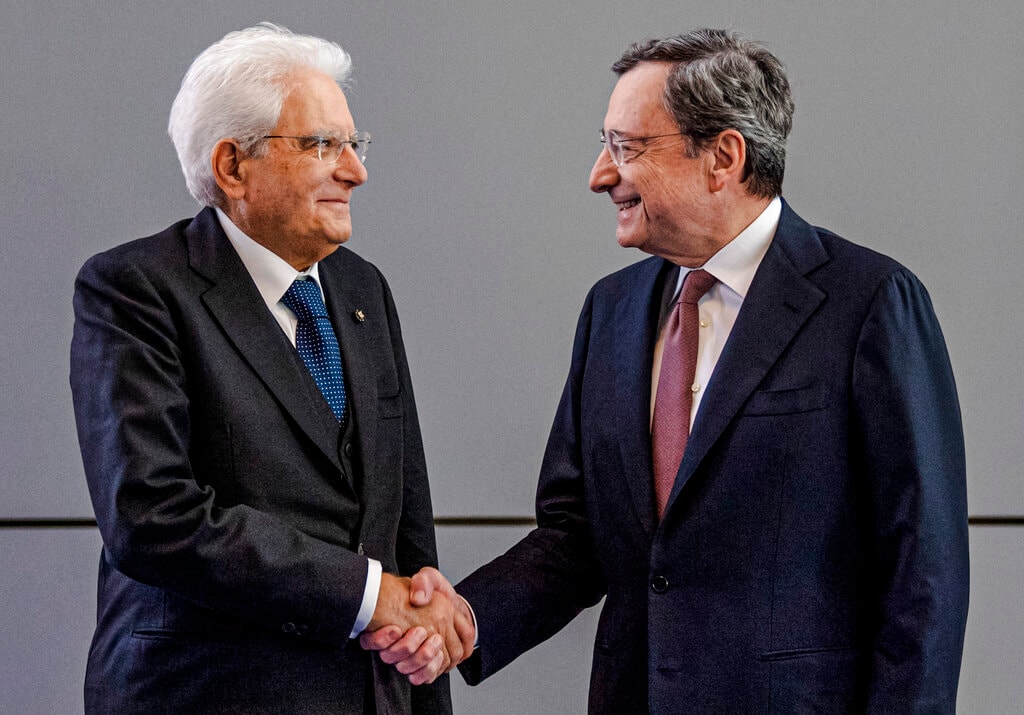 FILE: Italy's President Sergio Mattarella, left, welcoming European Central Bank President Mario Draghi on the eve of the change at the head of the ECB in Frankfurt, Germany, Monday, Oct. 28, 2019. (Boris Roessler/Pool Photo via AP)
CRISIS MANAGER
Urbane, cosmopolitan and softly spoken, Draghi has never made a drama out of a crisis.
He was a lynchpin of the Italian Treasury in the turbulent early 1990s when Italy was forced out of the European exchange rate mechanism, devalued its currency and faced the risk it would be unable to join the European monetary union.
This was when the media came up with the "Super Mario" tag due to his frenetic activity as Treasury director general, from organising privatisations to helping draft the Maastricht Treaty that set the ground rules of the euro project.
After leaving Italy to become vice-president of Goldman Sachs in London from 2002-5, Draghi's reputation as a crisis manager was burnished when he was called back to Rome to revive the fortunes of Italy's central bank, whose governor Antonio Fazio had been forced out by a corruption scandal.
At the Bank of Italy Draghi's international standing and open, outward-looking approach were refreshing after Fazio's parochialism and closed management style, and paved the way for his ascent to the presidency of the ECB from 2011 to 2019.
In 2012, after his famous pledge to do "whatever it takes" to save the euro at the height of the currency bloc's sovereign debt crisis, Draghi became the darling of financial markets and one of Europe's most recognised and powerful figures.
With inputs from Reuters & AP
(Edited by : Abhishek Jha)
Check out our in-depth Market Coverage, Business News & get real-time Stock Market Updates on CNBC-TV18. Also, Watch our channels CNBC-TV18, CNBC Awaaz and CNBC Bajar Live on-the-go!