The World Health Organization (WHO) chief had earlier argued that China’s zero-COVID strategy to defeat the pandemic is not sustainable.

China's Xi Jinping can't blame the protesters for the ongoing unrest since he can't blame them for what his government had given birth to during the pandemic — the Zero COVID-19 policy. The country's strategy to mitigate the virus spread has yet and again faced backlash because of its extreme nature.

Budget 2023 Highlights: Hope sees the invisible and feels the intangible

The current nationwide protests — which have now spread to other parts of the world — are a result of this widely-criticised policy. However, a fire incident in the Xinjiang region had just acted as a catalyst for the citizens' anger.
ALSO READ | Dating apps and Telegram: How China protesters are defying authorities
Clashes were reported between police and protesters as hundreds took to the streets over the last weekend to oppose COVID curbs. While protests are still raging and security has been tightened at some protest sites, speculations are rife over whether Xi Jinping will rope in the military to quell the tension in case it escalates further. And if he does, how will the world react?
Will China call in the military to quell mass demonstrations?
The recent protest, which has been termed "rare" by many media outlets, has reminded many of the protests in Tiananmen Square in 1989. Some reports argued that there have been several such demonstrations in the history of China, but it is not since the Tiananmen Square protests that so many Chinese have risked arrest and other repercussions to take to the streets over a single issue.
ALSO READ | China COVID protest: Very strong political tinge to some demonstrations, say experts
The Tiananmen protests make a significant chapter in Chinese history when martial law was declared in Beijing. Caught up in the debate over rapid economic change and maintaining strict state control, top party leaders were having internal divisions amongst then, which eventually led to the replacement of the party's general secretary in China at that time.
But this is not 1989.
China has already drawn the ire of the leaders of the United States, the United Kingdom and the United Nations over the ongoing protests. British Prime Minister Rishi Sunak declared on Monday that the UK's “golden era” of ties with China was over. He said this While describing China's growing authoritarianism as a “systemic challenge to our values and interests." Meanwhile, the US and the UN backed the right of people to peacefully protest in China.
ALSO READ | Chinese state media keeps COVID protests off front page as authorities move to censor it
Now, if China uses military troops to counter the protests over COVID-19 curbs, it might invite global condemnations and consequences - bringing another blot to its integrity.

VIDEO: A wave of protests against China's strict zero-covid policy and calling for greater freedoms have sparked demonstrations from around the world. pic.twitter.com/2E87TtH50V

'Step down Xi'! But can it happen?
"Down with the Chinese Communist Party, down with Xi Jinping" was among some slogans chanted during protest rallies in China — making it evident that protesters were calling for a "greater political freedom", and not just freedom from lockdowns and masks. 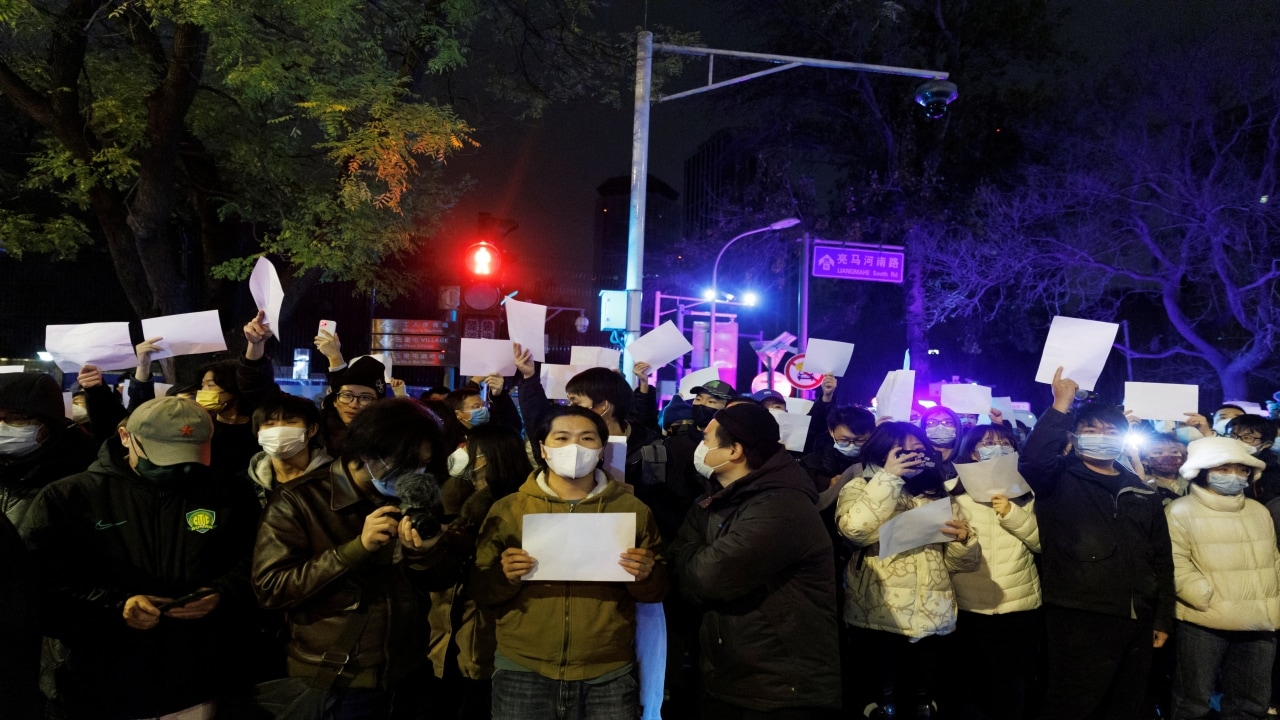 People hold white sheets of paper in protest over coronavirus disease (COVID-19) restrictions in Beijing, China, November 28, 2022. (Image: REUTERS)
But to think that Xi Jinping will concede defeat would be naive. He wants to be, and in fact, a powerful figure in Chinese politics. He has firm control over the military, the Chinese Communist Party (CCP), and security and propaganda machinery. Hence, according to Reuters, analysts believe it would be hard for protesters to topple Xi's government.

In a rare surge of protests in China, demonstrators called for the ruling Communist Party and its leader, Xi Jinping, to step down, amid anger at the deaths of at least 10 people in an apartment fire in Xinjiang, presumably during a strict Covid lockdown. https://t.co/7eT7YT4nHw pic.twitter.com/WT54Q0yC1M

Xi Jinping secured a record third term as Chinese President this October, solidifying his position as China's most powerful ruler since Mao Zedong. Since his take over 10 years ago, he has brought back stronger state control over the economy and society. Since then, censorship has been expanded and dissent is not encouraged under his rule.
Xi to be blamed for China's COVID protests?
The World Health Organization (WHO) chief had earlier argued that China’s zero-COVID strategy to defeat the pandemic is not sustainable. Recently, the White House National Security Council also said: "...as we’ve said, we think it’s going to be very difficult for the People’s Republic of China to be able to contain this virus through their zero-COVID strategy. And yet, China is refusing to walk back from its strategy to contain the virus. 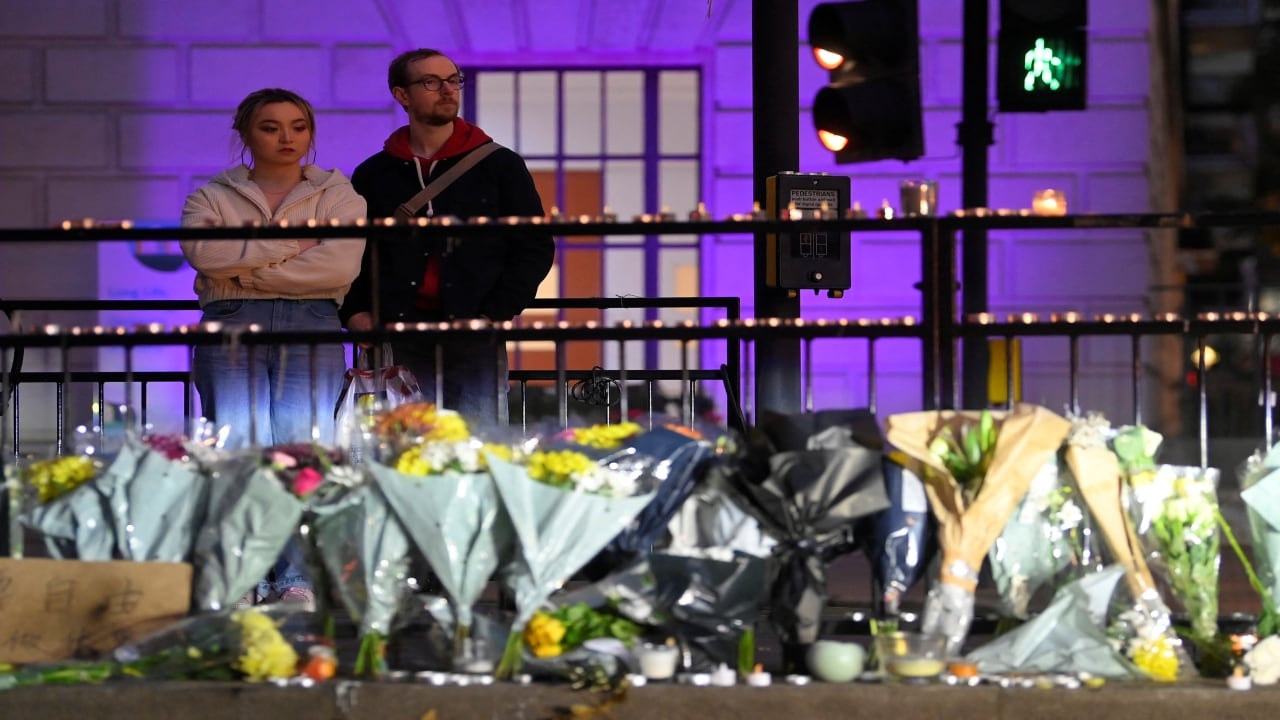 People stand near flowers and candles placed opposite the Chinese Embassy in London, Britain, November 28, 2022. (Image: REUTERS)
Under its COVID policy, China follows an elimination strategy, unlike other countries which follow a mitigation strategy. The rules in the country are strict in the sense that even if one case or a handful of cases is reported in an area, that area or the city is put under strict lockdown. There are mass testing and restrictions, but as noted by state health officials on Tuesday, the 'one size fits all' approach seems to be problematic for many.
While this policy has helped China prevent deaths due to COVID-19, it has drastically affected the livelihood and the economy of China. Also, residents have been frustrated over quick lockdowns as they struggle to get daily supplies.
"There are complaints about unprecise and untargeted containment which jeopardized people's livelihood... there's lack of patience and lack of communication with the general public... lots of misunderstanding being caused," a health official said on Tuesday.
Moreover, the recent protests were triggered after people were angered following a fire incident in Xinjiang's Ürümqi. Many believed that the rescue and escape operations were hindered due COVID-19 curbs. As many as ten people died in the incident. 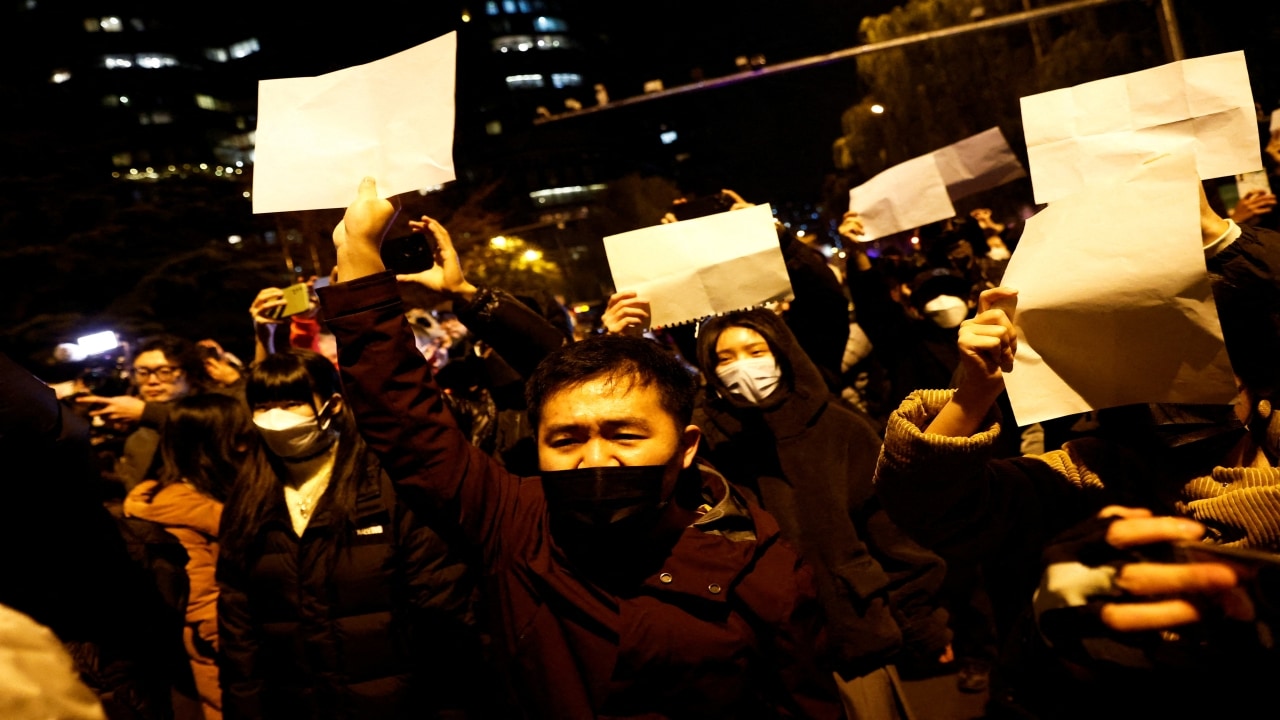 (Image: Reuters)
Why isn't Xi revoking its Zero COVID policy?
"It is not in Xi's character to give in," analysts were quoted as saying. If Xi gives in to public pressure and rolls back the zero-COVID policy, he would appear weak and in future, it might encourage people to take to the streets if they want any kind of change.
"If he lets go, it would mean that his past zero-COVID policy has completely failed and he would have to take responsibility for it. This makes him lose face," said Teng Biao, Chinese human rights activist, lawyer and scholar.
China has been consistent with its stance on the Zero COVID policy. During a press conference on Tuesday, a health official said that after the pandemic outbreak, the government is closely following the mutation situation. "We are closely following the evolving situations internationally... So, for the containment and control measures, we are doing fine tuning and modifications continuously...," he said.
Also Read: Here are the Indian companies which have been impacted by protests in China
Earlier, when asked about the protests, foreign ministry spokesman Zhao Lijian had said: "What you mentioned does not reflect what actually happened...We believe that... our fight against Covid-19 will be successful".
According to Reuters, Xi Jinping had earlier claimed personal responsibility for leading the "war" against COVID-19. He had justified zero-COVID with a need to "put people above everything" and counted his "correct" COVID policy among his political achievements when he sought a precedent-breaking third term at the 20th Communist Party Congress in October.
The loopholes in China's strategy
Analysts say that easing the policy before boosting vaccination rates could lead to widespread illness and deaths, overwhelming hospitals.
The single-day spike in COVID-19 cases in China has been hitting a record high for the past few days. However, the numbers are relatively small when compared with China's t population of 1.4 billion.
Also Read: After protests, Chinese official says lockdowns should be removed as swiftly as they are imposed
Now, many journals and studies revealed that people who recover from COVID-19 develop some natural immunity to the virus. In this case, China's Zero-COVID policy, which aims at zero cases, might dampen its fight against coronavirus - making a large population vulnerable to new variants.
The vaccination rate in China is also being questioned with studies suggesting that the immunity from two doses of either of the vaccines used in China — CoronaVac and Sinopharm vaccines — wanes rapidly. The vaccination gap among the elderly is another problem that the country faces.
Also Read: View | Covid Protest: Is this China’s Arab Spring Moment!
Taking the situation into consideration, health officials in China have reiterated the need for vaccination for the elderly, especially those above the age of 80, on priority.
"We will implement vaccination work around the country, especially for elderly over 80 years old. They added that nursing homes with elderly must take extra precautions and those eligible must get vaccinated as soon as possible. "Senior citizens must wear masks and avoid social gatherings..." the official said.

#UPDATE China says it will speed up a push to vaccinate people aged 60 and older against Covid after the country posted record daily case numbers in recent days.

Beijing will "establish a special working group... to make special arrangements for the vaccination of the elderly" pic.twitter.com/m06Jqiwi6U— AFP News Agency (@AFP) November 29, 2022

According to recent data released by the Chinese authorities, over 3 billion doses of the COVID-19 vaccine have been administered across the nation, covering 1.34 billion population. Over 239 million elderly above 60 years of age have received vaccines and 228 million have completed the full course of vaccination (About 90 percent of the total population). Over 227 million people above 80 years have received booster doses and 223.56 million people in the same age group have completed the full course of vaccination. (65 percent received the full course of vaccination).
(Edited by : Abhishek Jha)
Check out our in-depth Market Coverage, Business News & get real-time Stock Market Updates on CNBC-TV18. Also, Watch our channels CNBC-TV18, CNBC Awaaz and CNBC Bajar Live on-the-go!