Much like snakes themselves, India’s focus on research on snake antivenoms seems to have slithered past policymakers and scientific bodies.

Much like snakes themselves, India’s focus on research on snake antivenoms seems to have slithered past policymakers and scientific bodies.

At least 46,000 people die of snake bites every year in India, report independent studies. This accounts for half of all the snake-related deaths in the world. This is the biggest human-animal conflict in the country, and yet, both research and the treatment of victims is shockingly dated and on the verge of becoming irrelevant.
“The essence of the technology to treat snakebite victims hasn’t changed for a century,” said Kartik Sunagar, assistant professor at Evolutionary Venomics Lab, which is part of the Centre for Ecological Sciences at the Indian Institute of Science (IISc).
Scientists have now published a new study that exposes the lack of research in snake antivenoms (also known as anti-snake venoms or ASVs), emphasising and scientifically quantifying the need to develop region-specific snake antivenoms to make them more effective.
For a country that is as varied as India – both in geography and biodiversity – there is only one type of snake antivenom used for treatment: polyvalent snake antivenom. This antivenom is a mixture made from venom extracted from the ‘big four’ snakes: the spectacled cobra, the common krait, Russell’s viper, and the saw-scaled viper. The country has some 270 species of snakes, of which 60 are considered venomous and medically relevant and with various levels of toxicity.
Not only are the current antivenoms ineffective to those patients bitten by snakes outside of the big four, but their efficacy is also severely limited between two populations of the big 4 of the same species but from different regions of the country, say experts.
This polyvalent antivenom or ASV is used to treat patients across the country – even in states that don’t have the big 4 snakes. “For example, north-eastern states like Arunachal Pradesh and even the Andaman and Nicobar islands don’t have any of these four snakes. Yet, polyvalent ASV is used for treatment,” said Sunagar, one of the authors of the research paper, which is now published by the Public Library of Science (PLoS).
Along with Romulus Whitaker, who won the Padma Shri award in 2018 for his work in herpetology (the study of reptiles and amphibians), the paper was co-authored by scientists from the IISc and the Gerry Martin Project.
The new research paper studied the composition of venoms from snakes like Sochurek’s viper, the Sind krait, the banded krait, and two populations of monocled cobras, as well as their closest ‘big four’ relatives (saw-scaled viper, common krait and spectacled cobra).
It found out that the venom composition of these snakes is vastly different, not just between snake populations from the same species, but from varied regions too. “For instance, a stark variation was observed in the venom of two populations of the same monocled cobra species from West Bengal and Arunachal Pradesh. The former was found to be highly neurotoxic (targeting the nervous system) while the latter was rich in cytotoxins (targeting cells and tissues),” said Sunagar.
Decentralising antivenoms
Experts say snake antivenom production needs to be decentralised and developed by using venoms from the same region where it is to be used for treatment. Antivenoms or ASVs are produced by injecting safe levels of venom taken from the ‘big four’ into horses. These animals have a higher tolerance to snake venom than humans and produce antibodies, which are then extracted and made into serums for the ASV.
A majority of the venom collected to make ASV comes from Chennai and its outskirts. People from the Irula tribe, who specialise in catching snakes, have therefore played a significant role in saving lives of snake-bite victims. However, their work is not enough to address a problem at the current scale.
The toxicity of snakes depends on their geography, diet, season and various other factors. To make antivenoms that are effective in treating local population, the venom needs to be extracted from the same region. Antivenoms made from venom of snakes found in Chennai will only be effective in the southern region, and its efficacy reduces with distance.
Here’s hoping
Sunagar hopes that this research will push the government and private companies to produce better ASVs. “We are in talks with a couple of private players in an attempt to make better ASVs. We are also approaching the government to ensure this research translates into better treatment on-ground,” he said. 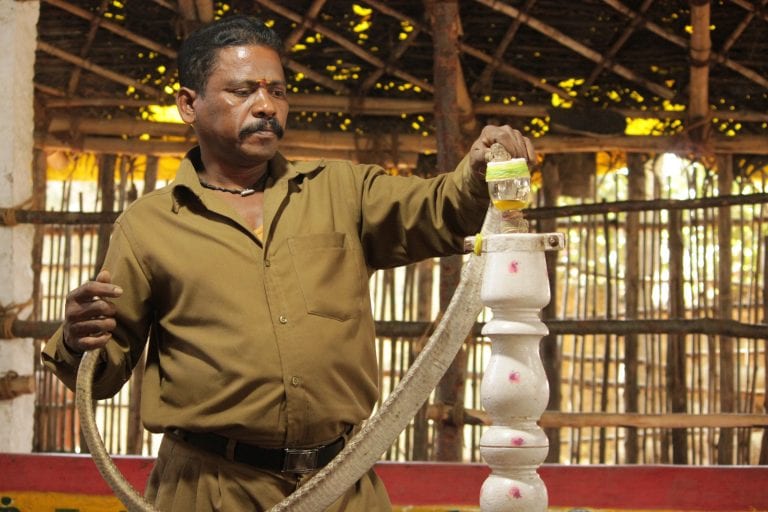 An Irula Cooperative Society member shows how venom is extracted. Photo by Karthikeyan Hemalatha.
The Haffkine Institute, a biomedical research institute in Mumbai has also initiated a study. “The nation-wide venom mapping study was taken up to understand the efficacy of ASVs better. So far, we have got permission to test 22 snakes from eight different states,” says Nishigandha Naik, director incharge at the institute, adding, “We are seeking permissions from the forest departments of more states to ensure the study is comprehensive.”
(This story was first published on Mongabay)
Check out our in-depth Market Coverage, Business News & get real-time Stock Market Updates on CNBC-TV18. Also, Watch our channels CNBC-TV18, CNBC Awaaz and CNBC Bajar Live on-the-go!