The shola sky islands are a biologist’s delight. Surrounded by lowlands, these highest reaches of Western Ghats in peninsular India host radically different habitats and species. The new research, published in the Proceedings of the Royal Society journal, provides insights into why some parasites can rapidly establish themselves in novel places and impact native wildlife health, while others are less capable. It might help in checking the spread of infectious diseases that kill wild birds in large numbers.

The shola sky islands are a biologist’s delight. Surrounded by lowlands, these highest reaches of Western Ghats in peninsular India host radically different habitats and species. Covered in montane evergreen forests, the shola mountains rise from a ‘sea’ of low-elevation habitats, much like oceanic islands such as New Zealand that are surrounded by a sea of water.

In both cases, the isolation limits the dispersal of species, making them ideal for studying the flora, fauna and avifauna. The latest in such research, conducted by scientists from India and the United States in the shola sky islands, may hold clues on how malaria-causing parasites in birds co-evolved with their hosts. This, in turn, might help understand how patterns of the disease emerge in natural wildlife or human communities.
The new research, published in the Proceedings of the Royal Society journal, provides insights into why some parasites can rapidly establish themselves in novel places and impact native wildlife health, while others are less capable. It might help in checking the spread of infectious diseases that kill wild birds in large numbers.
Some malarial parasites in birds, such as the unicellular Plasmodium species, are what scientists call generalists, which can rapidly invade a wide range of birds and cause large-scale infections and deaths. Whereas there are some so-called specialists parasites such as Haemoproteus species that can infect only a few bird hosts.
Scientists from the Indian Institute of Science Education and Research (IISER) at Tirupati, the National Centre for Biological Sciences at Bangalore and the University of Georgia in the U.S. studied avian malaria (malaria in birds) caused by Plasmodium and Haemoproteus in the shola sky islands.
“We demonstrate that some parasites are generalists and some are specialists, and that the generalist parasites like Plasmodium can rapidly invade novel communities, while specialists like Haemoproteus are less capable of doing so,” said Guha Dharmarajan, associate research scientist at the Savannah River Ecology Laboratory at the University of Georgia, and one of the authors of the paper.
Thus, generalist parasites are more likely to be associated with disease emergence in natural communities, Dharmarajan’s team reported. 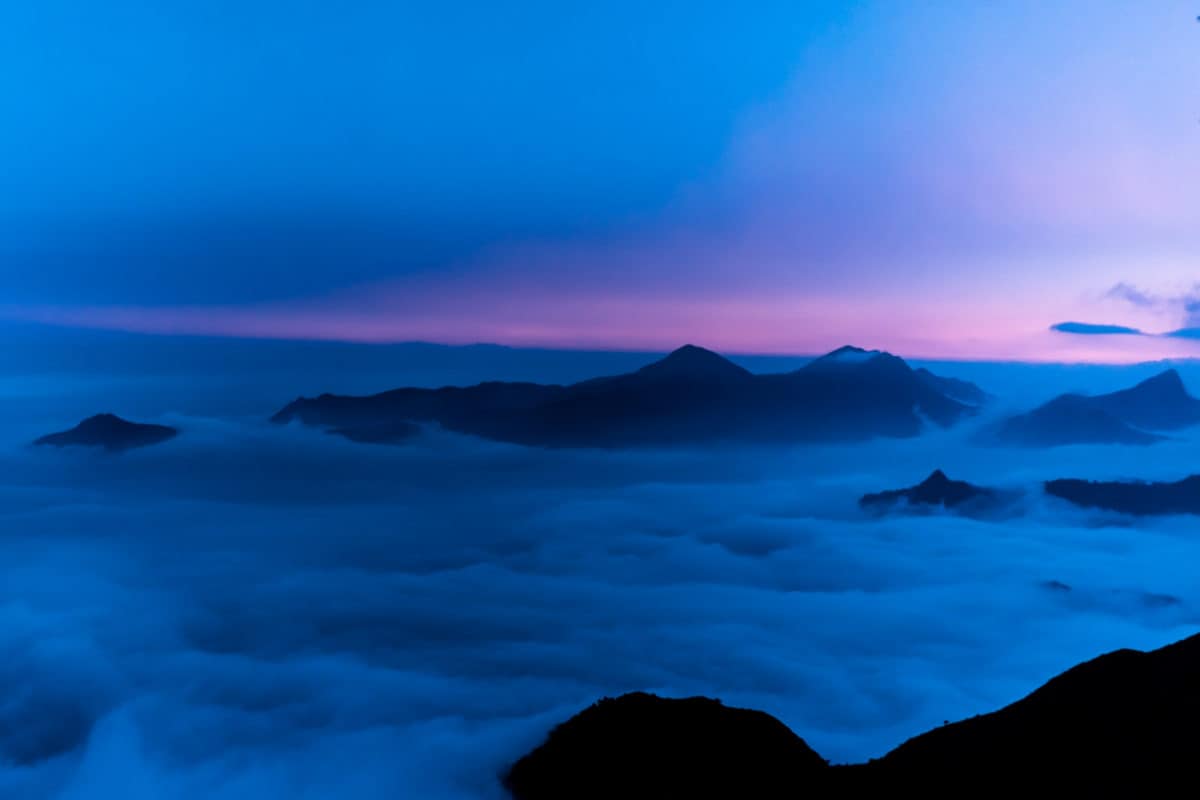 Similar to oceanic islands, sky islands are mountains floating in a sea of clouds. The shola sky islands form the highest reaches of the Western Ghats. Photo by Prasenjeet Yadav.

Avian malaria is one of the most important emerging infectious diseases in wild birds and has been associated with large-scale deaths. But these deaths have only been mainly reported in areas where humans have recently introduced it, for example, in Hawaii and New Zealand.
Intriguingly, the large-scale deaths on some oceanic islands such as Hawaii and New Zealand are primarily associated with infection by Plasmodium and not Haemoproteus.
The avian malaria parasites are specific to birds and cannot be passed onto humans or other mammals, clarified co-author V.V. Robin, a scientist at IISER, Tirupati. So, the presence of malarial parasites in bird populations should not worry forest officials that they would crossover to humans, he assured.
The scientists hope that the results from their study in the shola sky island bird community “may hold clues for what might happen in the future in other island bird communities, where avian malaria is more recently introduced.”
For biological scientists, continental sky islands provide excellent natural laboratories for examining how parasites co-evolved with local bird communities. The shola sky islands, located in the Western Ghats mountain range, are an important biodiversity hotspot and an ideal system to examine avian malaria disease dynamics because the wild birds here have probably shared a long co-evolutionary history with both Plasmodium and Haemoproteus, the scientists said. 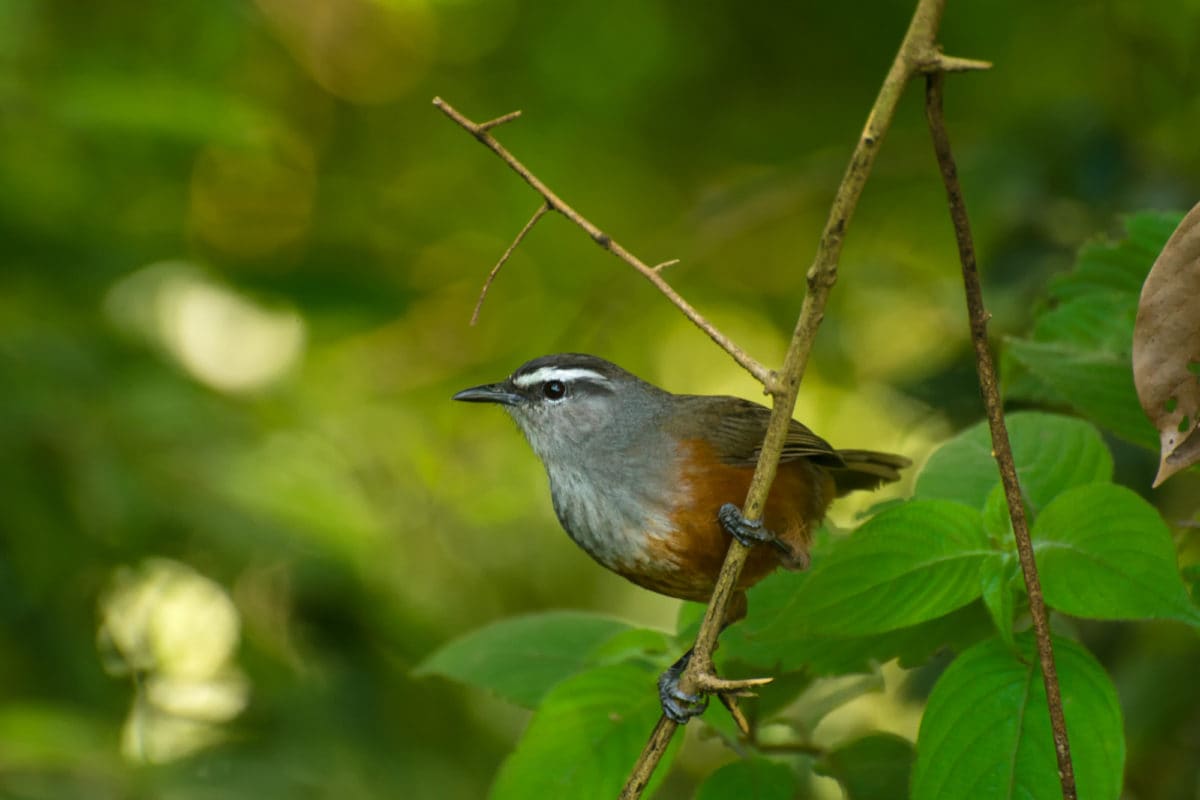 Kerala laughing thrush (Montecincla fairbanki), one of the four species of Chilapan genus which is endemic to Western Ghats of India. Photo by Prasenjeet Yadav.

The study sampled almost the entire shola sky island bird community, making it one of the first comprehensive studies of avian or bird malaria parasites in the Indian subcontinent.
The scientists found that about 40 percent of the bird populations were infected with avian malaria parasites, and the Haemoproteus was more commonly found than Plasmodium. They found 47 genetic lineages of avian malaria parasites, out of which 34 were novel and could be restricted to the Western Ghats. “This hints at an undiscovered parasitical diversity,” said Dharmarajan.
Previous research by the team had shown that bio-geographic barriers — for example, the Palghat Gap (a low mountain pass) or Shencottah gap and Chaliyar valley in the Western Ghats — have impacted some bird species, resulting in genetically different populations, or even species, on either side of these gaps.
Some bird species, such as flycatchers (Sholicola) and babblers (Montecincla), which were separated by the bio-geographic gaps for about 4-5 million years, still carried similar Haemoproteus lineages, the researchers found. This suggests that these parasites have colonised their hosts even before they were separated and have since maintained their genetic similarity. Nilgiri pilpit in the Western Ghats. Latest research on the wild birds in the shola sky islands shows that some malarial parasites are more likely to invade avifauna communities than others. Photo by Prasenjeet Yadav.
Emerging Infectious Diseases (EIDs) are rapidly increasing in incidence or geographical range in the past two decades. Disease emergence in a host population is driven by many mechanisms, the two major ones being adaptation by the parasite or pathogen to infect a new host species, and the introduction of a parasite or pathogen to a new geographical area, the scientists say.
The new study suggests that Plasmodium may be more likely to emerge in novel bird communities compared with Haemoproteus, for several reasons. One is that Plasmodium parasite lineages are host-generalists — found in a wide diversity of bird species — while Haemoproteus parasite lineages are host-specialists, which means they are restricted to one or only a few bird species.
A few host species, such as blackbirds, carry a high diversity of Plasmodium lineages. So introducing such birds or hosts into a new community could lead a parallel introduction of a diverse array of Plasmodium lineages.
While avian malaria parasites do not infect humans or other mammals, his team’s study “provides important information on some fundamental mechanisms that drive disease emergence in natural populations,” Dharmarajan said. “Specifically, our study provides interesting insights into why some parasites (such as Plasmodium) can rapidly establish themselves when introduced in novel places and impact native wildlife health, while others (for example, Haemoproteus) are less capable.”
The research has provided clues for emerging infectious diseases in wildlife and humans. The patterns observed in the study provide a broader understanding of the evolutionary drivers of other emerging infectious diseases that affect human and wildlife health, said Dharmarajan.
Effect of climate change
The scientist team now plans to examine the health effects of avian malaria in the shola sky island bird community. “Understanding the ecology and evolution of pathogens and parasites is of critical importance in present times when human-mediated environmental perturbations, from global climate change to local habitat fragmentation, have led to modified disease dynamics, and consequently the emergence of novel pathogens or re-emergence of old ones,” said Dharmarajan.
Altered environmental conditions, such as climate change, are expected to especially affect the incidence of diseases transmitted by insect vectors such as Zika, dengue and chikungunya fevers, and malaria. Climate change projections indicate that in the tropics, habitats in higher altitudes are likely to see increased incidence of such vector-borne diseases in the future.
“Studies of avian malaria, especially in high elevation ecosystems like the shola sky islands, could provide us with important insights into how the distribution and incidence of these diseases are likely to be affected by factors such as global climate change or local habitat modification such as fragmentation and urbanisation,” said Dharmarajan. “Our future work hopes to focus on these aspects of disease dynamics in high elevation areas, using avian malaria as a model system.”