Bihar chief minister Nitish Kumar recently questioned Lalu Prasad Yadav on doing little for the upliftment of women, apart from making his wife CM. Such jibes are not uncommon but the fact that this was specifically mentioned during a campaign indicates the importance of women voters to Nitish Kumar, who has received their greater support thus far. Will they continue to favour Kumar in an election in which he is facing serious anti-incumbency?

The participation of women voters has been higher in the past two elections. The female turnout was five percentage points higher than the male turnout in the 2019 Lok Sabha elections and seven percentage points higher in the 2015 assembly elections. The importance of the women votes gains more salience in this election as 5,15,800 new female voters have been added to the electoral rolls vis-a-vis 3,49,663 male voters.

In my view, the political choices of women in Bihar will depend on three factors.

First, it will be shaped by the approach of different political parties towards women voters. Nitish Kumar and Narendra Modi are undoubtedly banking on their female supporters, and this has forced other political parties to give attention to women. For example, the Indian National Congress is organising a Mahila Kranti Sammelan in which Priyanka Gandhi will address the conference virtually. Cinema halls and auditoriums have been booked, screens have been installed and social media is being used to reach women voters. BJP has planned town halls targeted at women along with outreach via smaller groups. Benefits received from central schemes like Jan Dhan Yojana, Ujjwala LPG scheme, and Swachh Bharat Abhiyan are being iterated to woo women voters.

Nitish Kumar can certainly claim that his government has actively pursued women-centric policies. He has distributed sanitary napkins and school uniforms, implemented 50 percent and 35 percent reservation for women in local bodies and government jobs respectively, provided financial grants, and established around one million women-led Jeevika Self Help Groups. He declared Bihar a dry state, which has enhanced his political appeal for women voters. Approximately 8.71 lakh girl students have bought bicycles under the Mukhyamantri Balika Cycle Yojana, which has significantly reduced the female dropout rate. As Mitra and Moene have shown, a girl who got a cycle is 22.9 percent more likely to complete her school education and 5 percent more likely to finish her college education. In the 'Sashakt Mahila, Saksham Mahila' element of his Saat Nishchay 2, Nitish Kumar has also promised easy credit for women entrepreneurs who start new ventures, a twofold hike in the grant for girl students and increased representation of women in administration. Therefore, it is not surprising that while the recent opinion poll conducted by Lokniti-CSDS shows that the popularity of Nitish Kumar has greatly reduced, still a higher proportion of women voters prefer to vote for NDA. 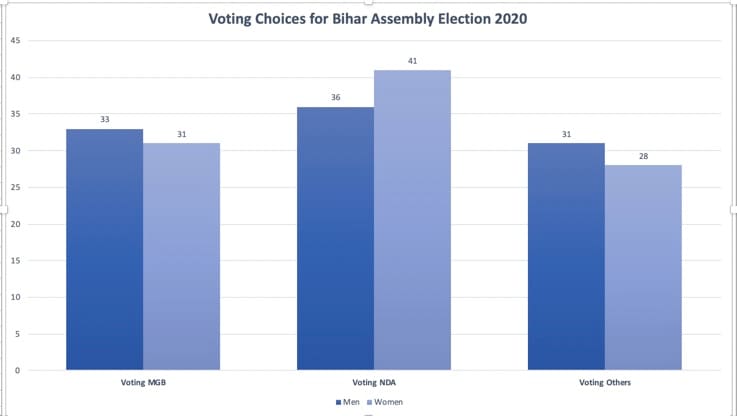 Second, the participation of women has not only increased in the electoral arena but also in Bihar's economy in the past decade. The increased voter turnout is both a consequence and a cause of women empowerment and women are more likely to make decisions based on their personal experiences, rather than along identity lines. If issues that affect individual women are addressed, women are more likely to vote accordingly. Kapoor and Ravi provide strong evidence to support that men and women vote differently. We are not claiming that caste, community, and class factors are not important, but the political choices of women are not passive and they actively consider which political candidates will help in improving their personal conditions. Political decisions of women are not always independent of other factors like family influence, but self consideration is an important element for the women of Bihar.

Third, in the midst of a pandemic, women are facing unique constraints that can alter their voting patterns and choices. Extra precautions like using face masks and regular sanitisation in public places might discourage women voters from turning out to vote. Similarly, there was speculation that the female vote might be of reduced importance since the migrant men returned home in the lockdown, and they would cast their vote in more numbers and influence women's choices. But this has been disproved by the trains running with 104-134 percent occupancy from Bihar to major cities, with the migrant workers neither waiting for elections nor festivals.

Despite the pronounced role of women voters, and the endeavour to appease them, serious women related issues persist. Because of the high rate of migration of men, agriculture in Bihar is highly feminised but women farmers lack basic provisions like land ownership rights, which denies them the benefits of many government schemes like loans and subsidies. They get lesser prices, lower wages, and have no decision-making power. Only 7 percent of women farmers of Bihar have landholding rights, against the national average of 13 percent. Women candidates and legislators are rare in Bihar. Crimes against women are rampant, as is evident by the Muzaffarpur shelter home case. A systemic overhaul is required. Unfortunately, all parties in Bihar are silent on this.