Will New York have a Patel congressman?

Will New York have a Patel congressman? A dynamic young Indian is campaigning to become the first South Asian congressman from New York.

Suraj Patel’s life story has all the elements of a dramatic movie – an immigrant journey, four generations of a Gujarati family in the motel industry, the clash of old and new, and the making of an American politician in the midst of the coronavirus pandemic. It’s a story about the resilience of New Yorkers – and about gratitude and giving back.

Yet it is also a story about dreaming big, about striving for one of the highest offices in the land – the US House of Representatives. Patel who is a lawyer, activist, and Business Ethics professor at NYU Stern is running for Congress from New York’s 12th District. If Suraj Patel wins, he will be the first South Asian from New York to become a US Congressman.
Patel is fighting Rep. Carolyn B. Maloney, a powerful and well-established Democrat who has been an incumbent for 28 years. It seems like a David and Goliath fight.
As New York Times noted, “Patel, 34, and Ms. Ocasio-Cortez, 28, are among a group of energetic Democratic insurgents across the country, many of them young or female or people of color, who are seeking to knock off some of Congress’s most tenured Democrats. They have not succeeded so far: No congressional Democrat in America has lost a primary in 2018.”
The primary contests feature four democratic challengers, including Patel. Even though the elections are in June, the battle has already begun because this year due to the coronavirus threat, the voting will be done by mail and has already started.
Like all Indian-American sagas, Patel’s story too starts with immigration. His family emigrated from rural Gujarat to Bloomfield, NJ and his father worked as a civil engineer with the New York Transit Authority but also had a mom and pop operation with a store, and subsequently motels.
“We had four generations in my household growing up,” recalls Suraj Patel. “My great-grandmother, grandmother, grandfather, aunt, uncle, mom, dad, and me and my three brothers all grew up in one household. My grandparents helped raise me while my parents worked.” Suraj as a child with his grandmother.
He proudly recalls that his great-grandmother lived to be 100 years old, and his own wonderful childhood where everyone pitched into the family business: “My brothers and I spent summer bussing tables and doing cold prep dicing tomatoes and onions in the morning for our Mexican restaurant. We learned to play hide and seek in motel laundry rooms - our allowance came from filling our vending machines with soda we would buy wholesale.”
It was all about immigrant struggles and dreams. The family ran a bodega in Bloomfield, New Jersey, and later they bought their first motel, a Days Inn in Indiana, off the side of the highway.
“Some of my fondest memories are of making hundreds of scrambled eggs for the morning breakfast buffet during special events or barbecuing tandoori chicken for regular guest,” recalls Patel. “We also grew up doing a lot of construction - my parents started a construction company and built our first hotel using an SBA loan. It’s a testament to the power of hard work, if our government can help provide opportunity. My family built their business never taking profits out and constantly reinvesting everything back into the business.”
His parents emphasized education as a ladder for opportunity and Patel and his brothers are the product of public schools. He won at the science fair every year, went to Stanford University for his undergraduate studies and taught at NYU Business School for five years. In 2006 Patel started at NYU Law School but was so inspired by “the broad, optimistic bold, hopeful movement that Barack Obama was building that I had to be a part of it.” He first became a field organizer for Obama and eventually moved over to doing Advance for the President.
In 2015, he recalls he had one of the most meaningful moments of his life, when he advanced the President to India: “Think about that - the son of people who left India almost 50 years prior was able to accompany and work for the President of the United States of America back to that country and visit the Gandhi memorial site as he threw rose petals over that hallowed ground!” 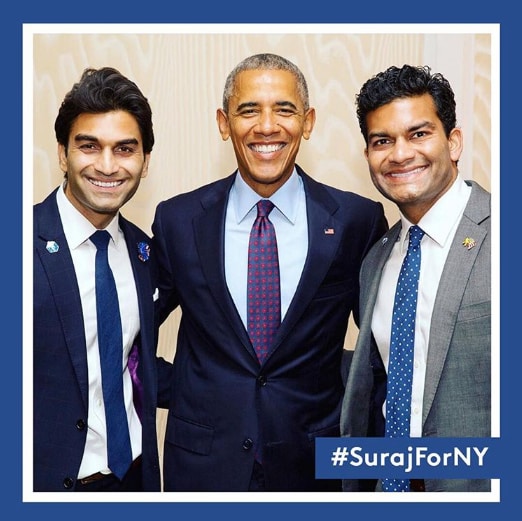 Suraj and his brother Viral with former President Obama.
So why did he want to go into public service? “You know, growing up as an immigrant is inherently political: there’s a constant struggle to fit in, to overcompensate for ‘how American you are’ to prove that you belong. Representation matters; it means so much to people to know that they have someone fighting for them that shares their lived experiences.”
He feels that politicians have been out of touch with experiences like his and with the struggles of workers, small businesses and frontline workers: “For me, those people are all my story. We all deserve representation that reflects the real New York.”
Suraj Patel has been in the thick of the COVID-19 crisis and had himself contracted the disease. After recovery he volunteered himself for plasma donation and has been working with nonprofits to donate rations and equipment to essential workers, hospitals as well as food pantries. Suraj Patel distributing food packages during COVID crisis.
He says, “We have a long road ahead of us, and I want to be fighting for a strong and just recovery for all families after the coronavirus crisis. The way that we’ve seen Congress attempt to distribute relief isn’t equitable. It isn’t just. And it left New Yorkers behind, including small businesses, restaurants, immigrants and our state government.”
As Patel gets ready for his election bid against Maloney, his second attempt, he says the current crisis has laid bare the fact that the social contract is broken and the need is to fight for access to universal health care, for universal family and medical leave, a public option for childcare and a monthly dividend which acknowledges parenting as work. He says, “If coronavirus is a dress rehearsal for climate change, we have failed to meet this moment in a dramatic way. I have a long list of policies and priorities, because for thirty years we haven’t made progress on any of this.”
How does he plan to fight an opponent who’s been in Congress for 28 years and has a lot of backing from the powers that be? He says, “The people I talk to when I’m out on the streets, they don’t care about seniority in Congress if it doesn’t do anything to keep them in their homes, or to keep food on their kid’s plate.”
He points out that out of all fifty states, New York was #50 for dollars received per COVID case and per COVID death. “So the conversations I’m having with people who are fed up and who are really hurting are centered on action, and the need for representation that is energized, and quite frankly that is angry. And I am angry.”
So have things improved for a child of brown immigrants who wants to sit at the table of power? Suraj Patel says, “My story is the story of New York. I always say, if you’re here in New York City, it’s because somewhere in your family history, or maybe it was you yourself -- somewhere, someone decided not to wait their turn. They decided to leave home and make their destiny in the greatest City in the world.”
It’s about people’s persistence and hard work, he says. He recalls how he grew up bussing tables and filling vending machines, and got to become an attorney and work for President Barack Obama: “That’s the story of New York; it’s the story of so many people in the district I’m running to represent. And that spark, that energy, that not being willing to wait your turn - that’s the energy I will bring to represent New York in Congress.”
Coming from a Patel family, he likes the idea of bringing hospitality into politics because he says that’s a missing element: “The idea that we build a longer table, not higher walls – and welcome everyone to the table.”
Lavina Melwani is a New York-based journalist who blogs at Lassi with Lavina.
Read her columns here.
Check out our in-depth Market Coverage, Business News & get real-time Stock Market Updates on CNBC-TV18. Also, Watch our channels CNBC-TV18, CNBC Awaaz and CNBC Bajar Live on-the-go!