homeviews NewsWhy investors are shying away from Indian airlines

Why investors are shying away from Indian airlines

With a 300 million strong middle class, low air travel penetration and an increasing propensity to spend, India is targeting 500 million passenger trips in the next 20 years. Forecasts estimate that India will be the third largest aviation within the next 6–7 years. Indian airlines have capitalised on this growth potential evidenced by the large fleet orders and aided by the high liquidity in the aircraft financing markets. Yet investors are shying away from Indian airlines. Why?

With a 300 million strong middle class, low air travel penetration and an increasing propensity to spend, India is targeting 500 million passenger trips in the next 20 years. Forecasts estimate that India will be the third largest aviation within the next 6–7 years.

Indian airlines have capitalised on this growth potential evidenced by the large fleet orders and aided by the high liquidity in the aircraft financing markets. The current commercial fleet of 645 aircraft is likely to double within the next 7-10 years and for each aircraft flying, there are 1.6 aircraft on order. Airports are bursting at the seams and there have been four years of consistent double-digit growth. Yet investors are shying away from Indian airlines. Why?

Cash is a fact, profit is an opinion – Alfred Rappaport

India’s airlines have witnessed profitability in varying degrees in the past five years. But for sustainable success, they not only have to position themselves for success but to also ensure to never run out of cash. Carrying excess cash is a luxury that a few airlines have thus access to credit facilities is important. But in the current market, even this is limited due to the NPA crisis, unstable EBITDAs and lack of independent management control. Take for instance the three listed Indian airlines. As of H1FY19, the cash (including cash equivalents) and bank balances as a multiple of operating revenue are:
For the unlisted carriers as well, the multiples are closer to that of SpiceJet and Jet. This does not bode well. Majority of the cash flow for airlines is generated by forward sales. But this is a double-edged sword as it leads to a situation wherein situations of distress, or even as negative news hits, forward sales are impacted translating into a cash-flow impact.
The remedy is discounting and fare sales towards generating cash but ultimately this leads to an overall revenue decline as was the case with Jet. To alleviate this, airlines require ensuring adequate liquidity via access revolver facilities, term loans and working capital lines. And perhaps only two airlines are adequately positioned in this regard.
Fleet financing decisions also seem to be a copy-paste of the success of one carrier, not taking into account the execution capabilities. In most mature markets, use a combination of aircraft purchases and sale-and-leasebacks that has a direct impact on balance sheet strength and consequently the access to cheaper rates.
Compare that to Indian airlines where the unencumbered assets are few and far between, balance sheets are weak, and sale-and-leasebacks (SLBs) are increasingly being used to cover operational losses. With aggressive inductions financed via SLBs, as aircraft come up to mandated heavy maintenance checks, there will be huge hits on the cash flow that have to be provisioned for. Ironically the financing that is helping cover working capital requirements in the near term can actually lead to a huge working-capital requirement in the future.

Keeping A Lid On Costs
“Cost control” is a very familiar term the aviation industry and in a price-driven market such as India, it is key to success. The focus though is mostly on operational costs which overlooks the cost of capital and that the capital demands a return in excess of a hurdle rate. When woven into management goals it can often lead to very different decisions various functions from network to fleet to even IT systems. As an example, a US airline in its most recent presentation to investors indicated that amongst several balance sheet measures it will be targeting adjusted debt to EBITDAR target range of 1.5x–2.5x.
What this implies is that the cost of new initiatives must be such that the debt levels are covered within the range at all times – and this inherently drives cost discipline. Without such a target, there is an inordinate focus on operations costs while other costs may be overlooked. However, in looking for a target range for Indian carrier one is left wanting. The three listed airlines show below debt levels as of Q2FY19: 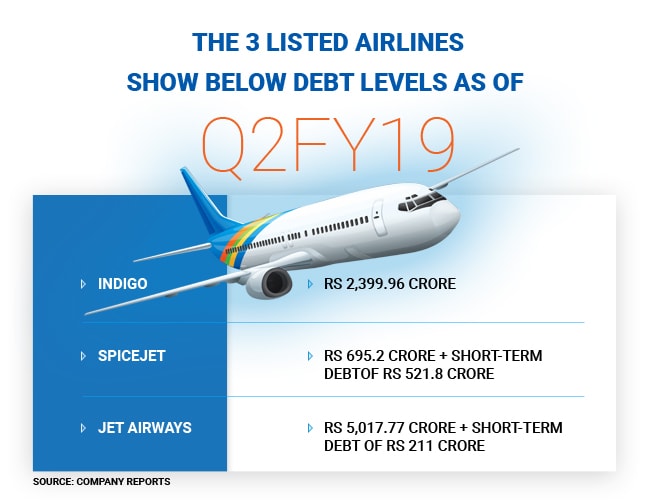 Collectively, Indian airlines are sitting on an order book of 1,000+ aircraft orders but the order volumes also carry a risk. In the event of a market slowdown and if orders are delayed or deferred, there is a repricing risk that ultimately drives up the cost for airlines. Absorption of these orders is also in question. For some airlines, while the order volumes have enabled carriers to get competitive rates on aircraft yet in an environment where LIBOR is up 26 percent already; an environment where lessors are demanding cash collaterals, cash reserves and stricter lease return conditions; a market with tightening credit; a revenue environment with declining yields; and increasing competition on similar routes - specific focus is required.
The costs of funding show too many variations. Alternative funding sources are available but only one airline has used this to its advantage. Overall, the market requires a long term and strategic focus on costs, which look beyond operational aspects.

The things you can’t buy are dedication, devotion, loyalty—the feeling that you are participating in a crusade – Herb Kelleher (Founder of Southwest Airlines)

Perhaps the most important point that airlines are missing is a focus on culture. Most recently this was highlighted in the disruptions faced by IndiGo. Other airlines are also witnessing culture issues with ranging from good to absolutely ugly. These are highlighted by the high attrition rates across functions; an increase in the reported number of events that highlight the lackadaisical attitude of staff; and management stability issues. Only one airline is positioning itself with a core focus on customer experience and this may indeed be their competitive advantage in the future.
The challenge with culture is that it takes an inordinate amount of focus and token items don’t suffice. With the new generation of workers joining the workforce with varying expectations, the culture has to be adapted accordingly. As of this writing, flexi work-hours, functional rotations and a clear path to progress across most airlines are the exception not the norm. Perhaps best encapsulated by a comment made by a HR head at when asked about succession planning across functions, “in a market like this we focus on headcount, we don’t have time to focus on succession.” This speaks to culture and simply is not a formula for sustainable success.
Not Quite The Copycats
Ironically, for the low-cost airlines, while they have adapted the low-cost model from Southwest Airlines, they have not quite copied the culture – which is a core element of success. And in many cases, this will take a significant amount of time and effort which India’s airline managers are unprepared for given the short-term thinking, short-term targets, lack of equity ownership, lack of independent control and only a topical understanding of cultural dynamics. Expatriates across senior ranks are an increasingly common sight and recently a senior management member expressed his frustration with this trend stating, “If I fail - I answer to the staff, I answer to my investors and I answer to my government; if he fails - he hops on a flight and returns home.” Unfortunately, this seems to be a reality.
To attract critical investments that airlines require, the above will have to be addressed. Failing that, while the Indian aviation potential continues to soar, India’s airlines will continue to thirst for investment.
Satyendra Pandey has held a variety of assignments in aviation over the past 14 years. Most recently he was the Head of Strategy & Planning at a fast growing low-cost airline. Previously he was with the Centre for Aviation (CAPA) where he led the advisory and research teams. His experience includes restructuring, scaling and turnarounds.
Check out our in-depth Market Coverage, Business News & get real-time Stock Market Updates on CNBC-TV18. Also, Watch our channels CNBC-TV18, CNBC Awaaz and CNBC Bajar Live on-the-go!