Why India is a graveyard for regional airlines

Updated : August 21, 2019 07:40 AM IST
Currently,  approximately 61 percent of the domestic traffic and 73 percent of international traffic still originates from the 6 metro cities of Delhi, Mumbai, Bengaluru, Hyderabad, Kolkata, Chennai and Cochin.
If the intent of UDAN was to make for viable and sustainable regional operations, as of now it has not fructified.

As an increasing number of travelers take to the skies, tier 2 and tier 3 cities are being integrated into airline networks. However, operations to tier 2 and tier 3 cities come with a unique set of challenges. For example, limited runway lengths, limited demand, extreme seasonality, lack of navigational aids and operational restrictions – to name a few. Together these make for a complex choice and challenging economics. Regional airlines can indeed provide the missing connectivity link. Yet the Indian aviation market has seen several regional airlines fail. Why so?

Regardless of the narrative – demand has been concentrated in the metros

The current narrative has been one of phenomenal double digit growth in passengers. Indeed from 51 million domestic passengers in 2005 to 126.7 million in 2018, Indian aviation has come a long way. Yet examined closely one sees that metro cities still figure disproportionately as the growth drivers. Currently,  approximately 61 percent of the domestic traffic and 73 percent of international traffic still originates from the 6 metro cities of Delhi, Mumbai, Bengaluru, Hyderabad, Kolkata, Chennai and Cochin.

What this means for regional airlines is that demand between regional city pairs is inconsistent and tepid. Consequently, true regional demand is yet to emerge. Regional networks thus have to have metro cities at one end of the routes. Without this failure is all but certain.

Mismatch of the aircraft and the network

The heart of any airline is its network. That is, the network development precedes fleet decisions. In the case of many carriers this has been turned upside down where fleet decisions often precede network decisions.  Consequently, there is a force-fitting of the asset to the network and the operating characteristics of the aircraft are out of line with the network requirements. This flows through to profitability. A cursory look at regional airline networks and aircraft to fly these reveals that over the last 10 years India has seen seven airlines with as many different aircraft types.

Regional aircraft lifecycles and business-models are not in alignment

Regional aircraft have unique characteristics in terms of lifecycles. That is, in several cases a regional aircraft is used because the market demand is not sufficient. As the demand matures and more flyers take to the skies, it necessitates the requirement for a larger aircraft. This has to be planned for. Failing to do so means the airline is then left with a regional aircraft route that has to be replaced with a different route having similar characteristics. The business model has to incorporate the same.

Regional airline structures also have differences to account for lifecycles. In the United States and Europe there is a structure of contract flying where an independent carrier flies the regional aircraft on a cost per departure basis. The tickets are marketed and sold by the larger “mainline carrier.” Other models are ones that are wholly owned subsidiaries, a franchisee model, white label flying, etc. where the regional fleet is separate and operates as an independent entity. Such models are yet to evolve in India. 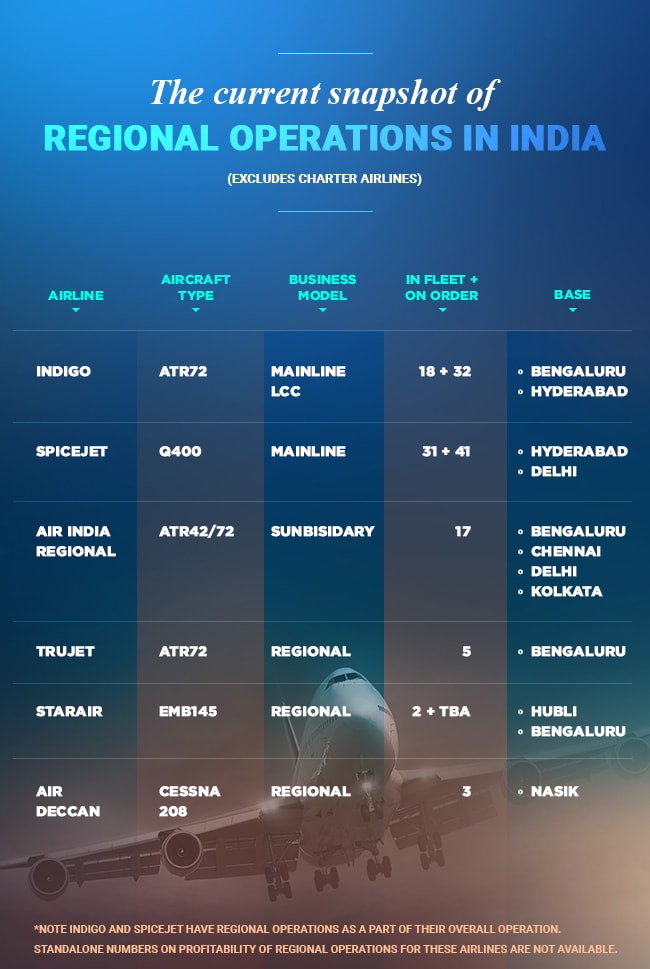 Due to the very few success stories in the area of regional airlines, financiers are extremely reluctant to lend. This coupled with the asset types makes for an extremely challenging liquidity situation. Regional routes also are shorter where alternate means of transport are always an option. And given the price elasticity as fares rise passengers simply choose not to fly as prices rise.

The nature of demand also lends itself to a late booking curve. That is, flash-sales to generate cash are not quite an option. Similarly ancillary revenue streams cannot be leveraged in the same manner as with larger airlines due to operational constraints.

That said , there are mitigation measures to stimulate demand but these have hardly been used in the Indian market. Both due to the nascent nature of the market and also the challenge in finding and keeping talent. This may change going forward.

But what about the governments push via the regional connectivity policy?

The government was cognizant of the fact that regional airlines in India never quite took off and consequently impacted connectivity. Thus the regional connectivity scheme labeled the “Ude Desh Ka Aaam Nagarik (UDAN)” scheme was launched in June 2016 and was intended to be a game changer. The intent of the scheme is to connect un-served and under-served airports across the country in an affordable manner boosting connectivity. The delivery mechanism includes bidding and awards of routes to airlines including subsidies on seats, discounted input costs and monopoly status on routes.

The scheme has its successes and failures and to the credit of policymakers, they have taken inputs from the industry and tweaked the scheme with each successive bidding. One would expect several new or existing pure regional airlines rushing for these rounds, but a closer examination shows much of the success has come from SpiceJet and IndiGo.

Ironically both these airlines have not taken the Viability Gap Funding subsidy, instead have leveraged the scheme strategically towards gaining additional slots at congested Tier-1 airports, monopoly status on routes and lower operational costs. Air India, also flying some UDAN routes via its subsidiary Alliance Air, however, Air India’s decision making is historically driven by government prerogative rather than commercial logic, making difficult to ascertain if UDAN has had any impact on their route decisions.

If the intent of the scheme was to make for viable and sustainable regional operations, as of now it has not fructified. One has seen TruJet fly several UDAN routes but two years into operations the airline is yet to show an operational profit. Air Deccan started and then suspended all operations and re-started and break-even profits are a while away. Air Odisha and Zoom Air are having its share of challenges and again both are loss making.

How soon before India sees a successful regional airline?

In spite of the regional airline graveyard, the market growth continues. With a 300 million strong middle class, low air travel penetration and an increasing propensity to spend, India is targeting 500 million passenger trips in the next 20 years. Forecasts estimate that India will be the third largest aviation within the next 6–7 years. And the growth can indeed be leveraged.

In spite of the regional airline death knell, a successful regional airline in India is not an impossibility. But it has to be planned for thoroughly. Models such as the white-label flying model can indeed be incorporated. These can not only help opening up newer markets but also help airlines with dynamic capacity adjustments. Further they can aid in retaining and in some cases gaining precious airport assets.  And in a market as complex and competitive as India, this could indeed be a competitive advantage.

As the market matures and as more aviation entrepreneurs emerge one hopes that the curse of the regional airlines is lifted.

Satyendra Pandey is the former head of strategy at a fast growing airline and a partner at the research and advisory firm Siyasha: http://www.siyasha.com

Previously, he was with the Centre for Aviation (CAPA) where he led the advisory and research teams. Satyendra has lived and worked across four continents and been involved in restructuring, scaling and turnarounds.
Tags domestic airlines IndiGo SpiceJet UDAN Views