When Isaac Newton lost a fortune in the stock market

Updated : November 01, 2018 06:30:47 IST
Newton reportedly proclaimed, “I can calculate the movement of the stars, but not the madness of men."
He also forbade anybody to mention the word "South Sea" when he was around.
Research shows investors do chase returns and it lowers the amount of money they get from investments. 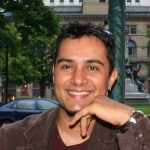 Imagine we read the following story of Mr. X's investing adventures in the stock of a volatile company Y:

Early in the year, Mr. X dumped his shares (in Y company), pocketing a 100 percent profit of 7,000 pounds. But just months later, as the market rocketed up (and perhaps afflicted with FOMO- the Fear of Missing Out), Mr. X jumped back in at a higher price—and lost 20,000 pounds when the stock crashed.

We might say- Ha! the guy must not be smart or perhaps not well informed and recount our successes in contrast.

But what if I told you that Mr. X was Sir Isaac Newton -- widely regarded as one of the most important scientists ever. In addition to being brilliant, he was well connected as a member of Parliament and the master of the Royal Mint. A chart of Newton's investing borrowed from Marc Faber via an article by Richard Evans from Telegraph looks like this: 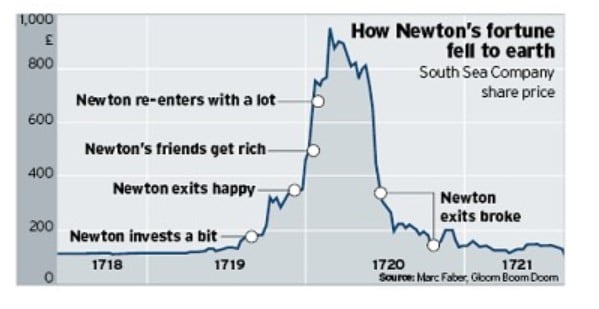 Shaden what? Newton reportedly proclaimed, “I can calculate the movement of the stars, but not the madness of men." He also forbade anybody to mention the word "South Sea" when he was around . It is a funny story with a promising side of schadenfreude- (I looked it up)- it means "enjoyment obtained from the troubles of others." We take comfort in the fact that this is a historic phenomenon and we tell ourselves that at least we are better at investing than the man who invented much of classical Physics.

It does not apply to me!

However, think again. As we talked about in the last blogpost, research shows investors do chase returns and it lowers the amount of money they get from investments. While research on how most mutual fund managers cannot beat their index fund benchmark is well known, not much attention has been given to the idea that return chasing behavior delivers negative alpha (performance) and exacerbates the problem. Now we will define two terms and provide some hard data.

Rupee (or Dollar) weighted return measures how many rupees you actually made and is derived as the IRR (internal rate of return) to measure the performance of fund's investors. This is the return that an average investor investing in the fund generated.

Time weighted returns measures the performance of the fund manager over time without taking into account how much money was invested. This is the NAV based return that the fund manager delivered.

The difference between the two returns = 0% -2.5% = -2.5% would indicate the money lost from return chasing or investing more money after a recent high performance.

Friesen and Sapp thus conclude that investor timing decisions reduce returns by an average of 1.56 percent annually. Some key findings from their paper:

The best fund managers are not able to deliver the best return because of investor timing. The authors find that the top 30 percent of managers do have positive alpha of + 0.27 percent monthly. But investors poor timing results in -0.25% gap between the dollar return and the time weighted returns. In other words by entering and exiting at the wrong time the investors destroyed almost the entire value the managers had created.

Timing Under-performance is higher for larger and more costly funds

The top 20 percent of the funds by assets under management (AUM) have -2.28 percent difference in the dollar returns vs. the time weighted returns per year vs. the average of -1.56 percent. Older and more expensive funds are associated with investor clientele that times more poorly.

Buy High and Sell Low: Why might this happen?

We are still investigating this. But one mechanism may be that if most managers have a particular style or expertise - say value investing or small cap stock investing - the returns those styles generate tend to be cyclical and weakly related over long runs.

Similarly if institutions can only find support for a manager after a 3 to 5 year track record of good performance, then the next 3 to 5 years may not be as good since either the style/factor valuations are high which suggest lower future returns, or seeing that style of investing become successful, a lot more funds start offering such products, thus crowding out the opportunity.

So what to do?

So do not be Newton in investing!

P.S. We are investigating how does the average Indian investors do vs. the academic studies we have cited and hope to update this blogpost in the future with some results.