Investment strategy requires time: Learn how Warren Buffett did it

Have a look at the figure below. Given the times we currently live in, you might think it illustrates the rising COVID-19 cases in India. It does not; but let us park that for a minute; I shall come back to it. First, let me tell you a story about two gentlemen. 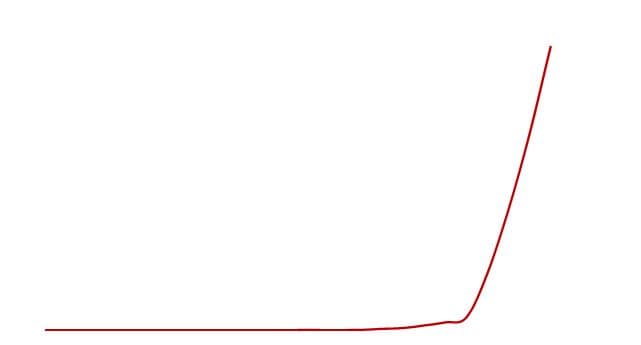 The first one, let us say Mr. A, studied to be an investment banker and got a job at a decent bank. He globe-trotted his way till the age of 30, by when he got bored and decided to start investing full time. He had saved $1 million, which became his seed capital. Over the course of the next 30 years, he did fantastically well, generating a 20 percent CAGR till he turned 60. By then, his corpus ballooned to $237 million and he decided to give up investing full time to rekindle with his childhood passion of playing golf. Mr. A did well (20 percent CAGR is not common and a quarter of a billion is a lot of money). But then, it would have been just another story, nothing that would inspire generations to come.

Now consider Mr. B. He started investing at the age of 11 and is still investing full-time as he becomes a nonagenarian. He has compounded his wealth at the same rate as Mr. A (20 percent CAGR), but for a longer period. He holds annual shareholders’ meetings, which are attended by shareholders from across the globe–to gain from his wisdom, but more importantly, to pay homage to one of the best investors of our generation. He hosts a charity lunch once every year, for which someone paid $4.6 million last year. Compared to Mr. A’s $237 million net worth, Mr. B is now worth a staggering $84.5 billion!

By now, you would have guessed that Mr. B is indeed Mr. Warren Buffett. But would it be surprising if I told you that Mr. A is also Warren Buffett with a slight nuance—he just decided to retire early at the age of 60. The chart above is the age-wise graph of his wealth accumulation. Of the $84.5 billion in wealth, he generated a whopping 95.5 percent (or $80.7 billion) after he turned 60. One might think that the rate at which wealth compounded after he turned 60 has increased dramatically; it has NOT! (age 30 to 60: CAGR of 32 percent, age 60 to 90: CAGR of 11 percent). This might sound counterintuitive, but that is simply how compounding works.

Of the thousands of books and articles that deeply analyse Buffett’s investment style, hardly any book mentions what’s far more important is that he has done it for way longer than anyone else. And come to think of it, Buffett hasn’t had the highest returns track record; many of my fellow asset managers in the alternatives space report far superior returns. Jim Simons, who ran Ren Tech’s Medallion Fund returned more than 66 percent CAGR over a 30-year life span. And yet, Jim’s net worth is not even a third of Buffett’s! The latter’s skills are possibly many, but his secret is one… TIME.

A lot of people on hearing this, come back with something like, “I agree! I want to get invested for the long term, but markets are at their peak right now. I will look for a more opportune time to get invested.” A lot of us think that ‘getting in at the bottom of the market and getting out at the top’ is the key to successful investing. While that has its benefits for wealth creation, it is not an essential criterion (see data below).

We have analysed data of the BSE Index since 1979 (close to 13,500 days). Had one chosen any random day to invest, there is a 92 percent probability that they would have generated a positive return over a 5-year period. Now, I am not suggesting that because it has happened in the past, it will always happen; but historical odds are staggeringly in favour of getting invested.

The learnings are simple, but counterintuitive. As investors, we focus a lot more on generating maximum returns for any given period, and a lot less on how we can keep doing it for a long time without getting burnt out. The highest returns mindset forces our attention on the smallest of the news items that we can consume (from social media, Whatsapp, news channels, etc.); after all, we wish to be the quickest to execute the trade before the market gets the chance to digest the news. In my opinion, that is as often noise as often as it is a signal; intelligently deciphering it to benefit consistently has proved futile. Second, we obsess endlessly about timing the market. We want to get in at the lowest possible price and get out at the highest possible price. Every now again, one gets it right, which creates a false sense of comfort that they can keep doing it. But since it is not humanly possible, it eventually leads to the feeling of either: (a) having missed out; or (b) having messed up. That is far worse than the few times one was right in timing the market.

Third, some take inordinate risks that can put them out of markets in the event of an adverse outcome. Last week, we discussed how things that haven’t happened before, happen all the time (no typos in that sentence). If you are that leveraged, where you potentially risk ruin in case of an adverse outcome, staying in the game long enough will prove highly challenging.

Lastly, we should be willing to learn and adapt. Strategies that have done well in the past five years are not the strategies that will continue to do well now or in the next five years. Strait-jacketing an investment thesis (I will only buy high RoE and fast-growth businesses, never buy PSU stocks, never buy commodity stocks etc.) does not take lessons from history and will likely result in resentment on several occasions.

Like nature, investment strategies should learn to adapt. There can be boundaries that we, as investors, will never cross, but willingness to learn and adapt will likely enhance our time horizons. In the end, that’s what matters more than anything else, right?

—Jigar Mistry is the co-founder of Buoyant Capital. The views expressed in the article are his own

Read his other columns here

Disclaimer: Information in this letter is not intended to be, nor should it be construed as investment, tax or legal advice, or an offer to sell, or a solicitation of any offer to make investments with Buoyant Capital. Prospective investors should rely solely on the Disclosure Document filed with SEBI.
Tags investment strategies Views Warren buffett
Published : April 30, 2021 03:22 PM IST