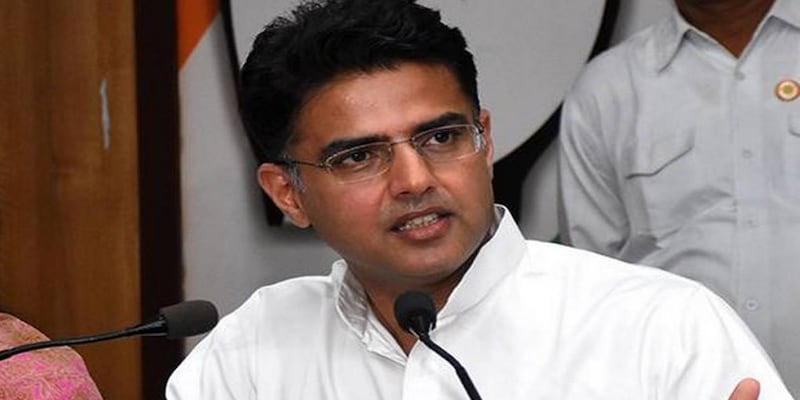 While politicians - here the young Pilot whose toile through heat and dust energised the party in the state after the 2013 rout and the veteran Gehlot, who is still close to Gandhi family as well as the new Congress chief - are adept at playing games, the real challenge is for the party President to handle the imbroglio. It becomes all the more difficult for Kharge in a scenario that the party is strapping up for the elections in Himachal Pradesh and Gujarat, and Rajasthan itself is scheduled to elect a new legislative assembly by this time next year.

There is never a dull week In politics. Just as parties are gearing up for elections to the two State assemblies of Himachal Pradesh and Gujarat, a section of the Congress party in Rajasthan sent a reminder to the party central leadership about an unsettled issue.

Earlier this week, Sachin Pilot just about nudged the new Congress President Mallikarjun Kharge that among the tasks on his priority list should be a decision to close the chapter on the change of leadership in the border state.
Rajasthan is scheduled to elect a new legislative assembly by this time next year and Sachin Pilot remains hopeful the Congress will eventually hand over the reins of the state government to him.
Pilot and his band of followers strongly believe he is the rightful claimant for the position as the State Congress Chief he steered the party to wrest power from the Bharatiya Janata Party in the last assembly polls. The grudge is that senior leadership closed ranks to rally behind veteran leader Ashok Gehlot and installed him as the Chief Minister, when it was the young leader whose toile through heat and dust energised the party after the 2013 rout.
The grouse lingers and after a major aborted attempt by Pilot last year to force a change, there was a strong indication the party was ready for the change of guard. The impression gained ground as Gehlot was tipped to be the official candidate in the party presidential election and relinquish the post of Chief Minister.
That the magician, as Gehlot is known for his real skills of ‘Jadugari’ (deftness of hand), ran circles around the central leadership observers including Kharge is too recent to recount. This is the raw nerve that Pilot sought to touch by choosing to suggest that Gehlot may be moving closer to the opposition camp. In the process he likened it to the manner in which one of the Chief Minister's contemporaries Ghulam Nabi Azad deserted the Congress camp by snapping several decades of association.
Also Read: VIEW | The new Congress President and the road ahead
Interestingly, while many may disagree with Pilot’s assessment, it can be a tactic of counter attack against the senior party leader who at times did not lose the opportunity to portray the young challenger as one with the proclivity to switch sides. The score on this account is now equal.
While politicians are adept at playing games, the real challenge is for the new Congress chief Kharge. How does he handle the Rajasthan imbroglio? The scenarios that exist now are that the party is in the midst of two important activities – Rahul Gandhi’s Bharat Jodo Yatra and strapping up for the elections in Himachal Pradesh and Gujarat.
The Yatra by some accounts is getting traction in the parts it traversed so far. It awaits a larger test on entering the Hindi heartland where the Bharatiya Janata Party remains the party of preference. As per schedule, Rahul Gandhi’s entourage should be reaching the borders of Rajasthan next month. In response to the fresh salvo from Pilot, Chief Minister Gehlot reminded it was time for all the good people to come to the aid of the party and direct energies to make the mission Rahul Gandhi embarked upon, achieves its goal.
As the new Congress president Kharge’s first test will be the party performance in the two state elections, especially the hill state of Himachal Pradesh that is considered a low hanging fruit to pluck. The BJP, in the saddle in Himachal, pulled out all stops to ensure a repat victory. BJP president Jagat Prakash Nadda, is stationed in his home state to iron out the deep wrinkles in the party. The stakes are high on both sides especially since the Congress is in the electoral battle under Pratibha Singh, widow of former Chief Minister Virbhadra Singh who is revered both in the Hill and plains of the state.
The other issue for the Congress central leadership vis-à-vis Rajasthan is that any action or inaction can demonstrate how effective the writ of the party runs across the state units. That Gehlot and his supporters are unwilling for any compromise of a change of leadership in Rajasthan is clear. In this scenario dilemma before the Congress is should it allow status quo, which in turn could send a message of a weak leadership. The flip side is about the timing of change in Rajasthan and entering the polls with a section of the party in a major sulk. Scalded by the Punjab experiment should the party take yet another risk in Rajasthan?
There are no easy answers. One way out for Congress president Kharge is to strike a successful compromise between the two warring camps, one each led by the veteran Gehlot and the younger Pilot who remained patient otherwise.
For all the talk of ushering in a generational change in the Congress, the party chose a seasoned octogenarian at the helm as against a younger Shashi Tharoor while Rahul Gandhi remains reluctant to assume any responsibility.
That does not take away the unwritten code in the party that the final court of arbitration remains the Gandhi family in whom Sachin Pilot trusts.
Also Read: View: Why Ghulam Nabi Azad, who stayed beside Indira Gandhi to Sonia Gandhi for five decades, quit Congress
— KV Prasad is a senior journalist and has earlier worked with The Hindu and The Tribune. Views expressed are personal.
Read his other columns here
Check out our in-depth Market Coverage, Business News & get real-time Stock Market Updates on CNBC-TV18. Also, Watch our channels CNBC-TV18, CNBC Awaaz and CNBC Bajar Live on-the-go!