View: Indian consumer and the evolution of digital consumption

View: Indian consumer and the evolution of digital consumption Over the last few years, there's been a huge redefinition of the middle class, massive growth in disposable income and very high penetration of internet and internet-driven services that have completely invalidated the previous assumption.

Indian consumer tech companies have had to go through enough cycles of consumer behaviour change. The scepticism of online payments led to the cash-on-delivery model, the challenges faced by lack of credit card penetration for online payments took UPI to solve. However, the distrust of Indian consumers' attitude towards paying for digital goods continued.

Users had shown a very strong inclination towards buying goods online (e-commerce), but purchasing purely digital goods were still a novelty. Original consumer tech companies in India were not reliant on extracting revenue from consumers. The paying propensity of Indian customers was never that high.
We started seeing some strong shifts in the Indian user behaviour over the last few years, first propelled by Jio, however also fuelled by a few other factors.
Over the last few years, there's been a huge redefinition of the middle class, massive growth in disposable income and very high penetration of internet and internet-driven services that have completely invalidated the previous assumption.
Half of the Indian population is now middle class and a very good chunk has accessed online services.
The new middle class—persons spending anywhere between $2 and $10 per capita per day—has doubled in size to 600 million people between 2004 and 2012, a study by two Mumbai University economists has found. That’s nearly half of India’s 1.2-billion population. 600 million people are now part of India's middle class-including your local carpenter.
How we perceive the middle class is also incredibly different now. Carpenters, Street Vendors, etc are also now middle class with a decent amount of disposable income.
Another Mumbai University study says that the middle class now includes carpenters, street vendors, decorators and drivers amongst others. The majority are in sectors with low barriers to entry meaning that in theory anyone can work in them and pull themselves out of poverty. 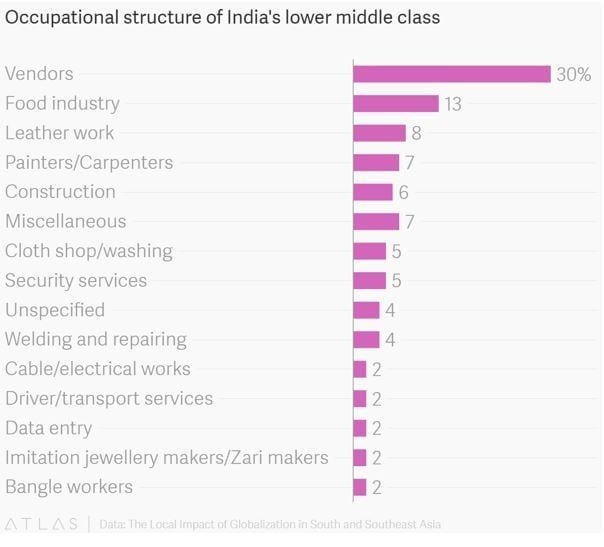 This has resulted in an overall disposable income increase over the last two decades leading to a very big change in terms of consumption both offline and online. 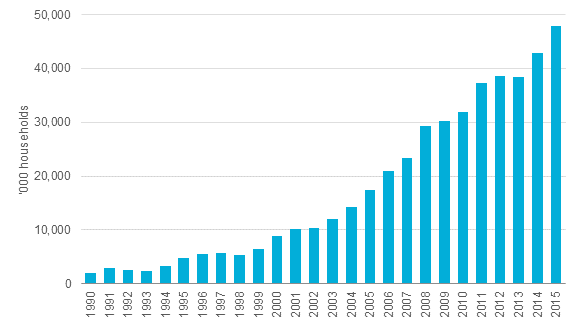 Number of Households in India with a Disposable Income over US$10,000: 1990-2015
This has had some very interesting effects on the behaviour of an average Indian user. There is a sufficient amount of money available to spend, there is a very deep internet penetration available and more important now the user has been trained on digital goods for a long time.
Users have become more decisive in the kind of products they want to use digitally and are not shying away from being decisive about the product they use. Upon perception of heavy bias towards Indian usage from Twitter, users very decisively flocked to Koo, allowing the app to amass over 7Mn downloads in a few weeks. This was a strong indicator of strong preference in digital services being displayed by Indian users.
In the entertainment space, which leads the initial wave of subscriptions, Hotstar now leads the pack with 28 million paid subscribers in India. Netflix has a strong 4.6 million subscriber base. An average Indian is subscribed to 2-3 OTT Platforms today.
The pandemic furthermore has allowed catalysing some of this behaviour. Earlier in the first wave, we saw a tremendous digital adoption of education, championed by coding platforms with industry leaders like BYJUs and Unacademy scaling up valuations by huge multiples. This eventually also started reflecting in the health segment with Pharmeasy becoming a unicorn, planning an IPO while 1MG was acquired by Tata.
The digitally paying Indian user TAM (total addressable market) has grown significantly due to this and has opened up new avenues for transaction and subscription-based business models on the customer side.
Users pay – They pay for value. They find value in education as much they find it in entertainment. And once made frictionless, they have shown they will pay for it. Of course, the average paying capacity for the Indian user might still be on the lower end compared to the US counterparts however it is offset well by the massive TAM.
Sharechat recently showed how much inclined their user base was in tipping creators of good content. In our portfolio, we have seen KukuFM onboard 10,000+ annual subscribers every month, 22% of which are first-time subscribers of digital products. Breathe Well Being is reversing diabetes through digital coach-led lifestyle management and charging consumers directly a fee.
The Indian user has not only evolved but is also very highly opinionated about where they want to spend their time as well as money, but at the same time is the most willing to spend money on digital platforms than ever before. We are very keenly looking out for startups that are going to be part of this change in behaviour and lead to building a very strong and exponentially growing digital economy in India.
- By Anurag Ramdasan, Principal, 3one4 Capital
Check out our in-depth Market Coverage, Business News & get real-time Stock Market Updates on CNBC-TV18. Also, Watch our channels CNBC-TV18, CNBC Awaaz and CNBC Bajar Live on-the-go!