These places in India have distinct Mahabharata, Ramayana connections

Updated : January 22, 2020 06:30 AM IST
Lepakshi is a village in Andhra Pradesh, which as per legend is the very place where Jatayu from Ramayana fell after being injured in a battle with Ravana.
It is generally believed that the state of Assam in ancient times was a kingdom ruled by demon king Banasura.

Almost every Indian since time immemorial has grown up listening to the stories of Ramayana and Mahabharata. These two timeless epics are so deeply rooted in our individual and collective psyches that hardly a day passes by where one would not have come across a place that is not intrinsically connected to either of them.

During the 1980s, when these two epics were televised, the entire nation, irrespective of religion, caste or creed sat in front of their television sets making the streets deserted, whenever these two were beamed on a Sunday morning. The impact of these two epics has been matchless on the lives of the people of this subcontinent. In the same vein, the entire country is covered with numerous shrines, structures, sites, and natural geographical formations which claim to be the places where some of the incidents of Ramayana and Mahabharata might have taken place. We will not get into the debate over the authenticity of those stories connected to such sites or matching them with corroborative archaeological evidence, but we will look at our travel options in connection with them, as the stories that we have heard so much right from our infancy make these tourist places of India fascinating.

There are a few places in India connected to these epics which are already very famous. One is the Adam bridge of Rameswaram in South India which is connected to Ramayana and believed to be the same bridge built by Lord Rama with the help of his monkey army to reach Lanka (and hence also called Rama Setu). Another is Bhimbhekta of Madhya Pradesh, advertised by its tourism board as 'India's Oldest Art Gallery', with the local people believing that Bhima, the second Pandava, once rested here for some time and hence the name. But there are other places which are not so well known, nonetheless are also intrinsically connected to these epics. One of them is in Madhya Pradesh itself, its famous hill station of Pachmarhi. As per common belief, this place got its name from the ancient caves here, popularly known as Pandava Caves and believed to have been built by those five brothers during their exile. If you look at those caves closely, whether they originally belonged to the Pandavas or not is debatable, but they still look eerily ancient and transports a tourist back to an age when humanity probably had its first rendezvous with civilisation. 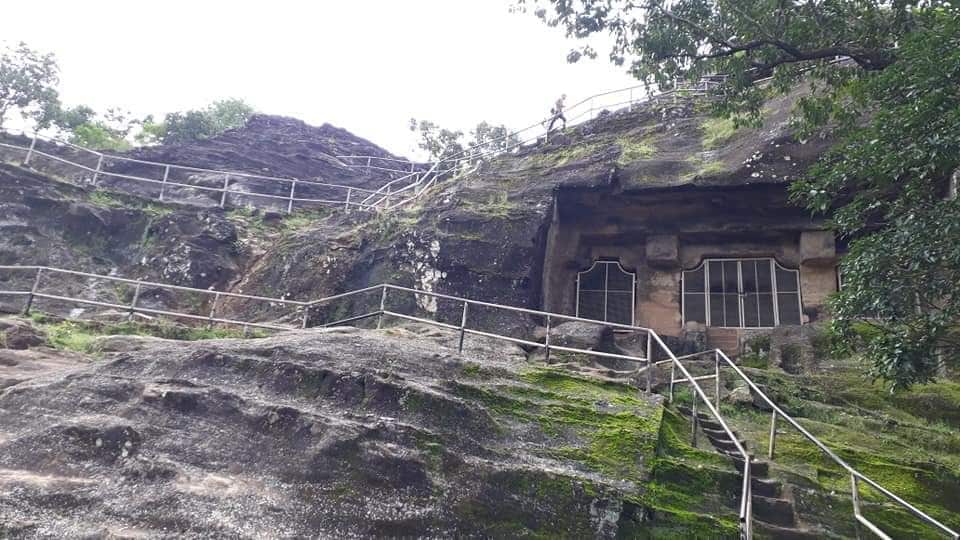 Pandava Caves at Pachmarhi in MP.

We all know that the ancient city of Vadnagar in Gujarat is the birthplace of Prime Minister Narendra Modi. But historically, this place has also been identified with the famous Chinese traveller pilgrim 'Xuanzang', who probably visited this area in the 7th century CE and recorded the presence of Buddhist establishments here. In Mahabharata, a place finds mention by the name of Anartapur, and perhaps this Anartapur is the modern Vadnagar or someplace near to it. It was later ruled by the Yadavas of Lord Krishna in the epic.

Similarly, concerning Ramayana, there are Jogimara and Sita Bengra Caves of Chhattisgarh situated in the Sarguja district. The district headquarters of Sarguja is Ambikapur which is around 350 km away from the state capital of Raipur. According to the epic, Lord Rama, Lakshmana and Sita resided in these caves during their exile and hence one of the caves is named accordingly. Some sources also claim that these two caves are the oldest theatres of the world which is very hard to prove now without any further archaeological shreds of evidence. Both the caves can be reached through a natural tunnel, which is called Hathipol, the name came from the belief that even elephants can pass through this tunnel, because of its huge size.

Mana, a small village situated close to the Indo-Chinese border in Uttarakhand and only 3 km away from the Hindu pilgrimage site of Badrinath also has two caves that are around 5,000 years old or so is believed. These two caves have been named after Ved Vyas and Lord Ganesha, and they supposedly composed the epic Mahabharata right here as per local belief. Speaking of Uttarakhand, this entire state is strewn with places of Mahabharata connection, starting from the Pancha Kedar Shrines, built by each of the Pandava brothers, to the Lakhamandal Complex where the Kauravas had planned to burn the Pandavas in their sleep. There are innumerable places in Uttarakhand, carrying the legendary stories from the epic.

Moving to South India now, Lepakshi is a village in the state of Andhra Pradesh, which as per legend is the very place where Jatayu from Ramayana fell after being injured in a battle with Ravana when he was escaping with Sita. Lord Rama when he found the bird there later on, asked him to rise and hence the name (Lepakshi means Rise, O Bird). This place is famous now for its architecturally beautiful temples.

The state of Goa too has places associated with Mahabharata. The Arvalem Caves in Sanquelim is known for their appealing architecture and has long been attracting tourists. The origin of these caves has remained a matter of debate over the years, but local people believe that the Pandavas have stayed in these caves for some time, and hence they also call them Pandava Caves.

In the neighbouring state of Maharashtra, the name of the hill station of Chikhaldara is a corruption of the name Keechakadara. As per legend, this hill station is the very place where Bhima, the second Pandava, killed the villainous Keechaka in a herculean bout and then threw him down into the valley. This place thus acquired the name.

The name of the demon king Banasura reverberates in the epic of Mahabharata in relation to Lord Krishna. It is generally believed that the state of Assam in ancient times was a kingdom ruled by this same asura. However, one of the tallest peaks of Western Ghats within the Wayanad district of Kerala is also called Banasura Hill, where he might have resided. The view from this hill is spectacular, and it is a favourite spot of many trekkers.

Moving to North India again, the Bhagwan Valmiki Tirath Sthal or Bhagwan Valmiki Mandir is a famous tourist attraction in Amritsar, Punjab. As per some beliefs, this temple is the place where the original ashram of Maharishi Valmiki from the Ramayana existed and where Goddess Sita also gave birth to Lava and Kusha. The Ajodhya Hills of West Bengal, as the name suggests, is another place associated with Ramayana.

This list will never stop if we go on discussing the various places associated with these two epics. Not only in India, but Ramayana and Mahabharata have also influenced other countries as well. But in India, many sites continue to carry their legends in all their magnificent glories. The tourists while visiting these places, will find them exciting because of the epics.

Saurav Ranjan Datta is an internationally recognised quiz researcher, a writer for several publications for the last 10 years, a poet, a traveller and a quiz master. He has also worked for several reputed organisations in the corporate world in senior positions for the last 15 years.
Tags mahabharata Pandava Caves places in Ramayana and Mahabharata Ramayana Views
Published : January 22, 2020 06:00 AM IST