The science of nation branding: Why India needs to market its cities abroad

The science of nation branding: Why India needs to market its cities abroad

Despite having 37 World Heritage sites, two well-known film industries and a multi-faceted and vibrant heritage, Indian cities have not done a great job of marketing themselves.

All civilisations had one great city that was the heart, soul and intellect of their kingdom - not just the seat of power but where art in its various forms flourished and thrived. India needs many such cities for people to be able to connect and identify with, and also with the hope that these cities will create opportunities of all kinds for its citizens. Not to mention, great rest and recreation avenues will improve the quality of life for everyone too.

It obviously brings in all that tourism revenue as foreigners begin to sample all the delights that a country has to offer. So maintaining those heritage monuments, buildings and a general all-round cleanliness is important as “it has become one of the fastest growing sectors in the world, generating a global revenue of $2,250 billion, and employing approximately 30 million people” stated a PricewaterHouseCoopers (PwC) report.
This creates exciting possibilities for artisans, handicraft makers and small-scale manufacturers of souvenirs and mementos that tourists can buy and which can be exported as well, hence generating revenue for the country. Skills can be upgraded too and this ‘upskilling’ will further enhance techniques and know-how that have been handed down for generations within a family or a community.
For this to happen, greater investment from private and public participants is needed and a framework needs to be put in place such as the ones mentioned by PwC:
All of the best cities in the world offer that special something to visitors. Whether it is the Moulin Rouge in Paris or the Cirque du Soliel in Las Vegas to Rio De Janeiro’s fun, partying culture, where every night the streets morph into nightclubs and people dance away the night -- everyone is looking to offer a unique and memorable experience to visitors. So Paris has formalised the ‘Fabriques de la Culture’, which includes making expensive real estate more affordable as workspaces and making iconic squares and landmarks easily accessible.Similarly, Bogota, which like Rio, has plenty of musical aptitude earned itself the ‘City of Music’ title. So guess where people are going to party when in South America? But Bogota did a smart thing by encouraging graffiti art, and graffiti artists are now encouraged to enhance citiscapes. In this scenario, the Indian Ministry of Culture has initiated the National Mission on Cultural Mapping and Roadmap, which focuses on promoting ‘Our Culture Our Identity’ via media and hosting events. The aim is to target 6.40 lakh villages in three years and adopt an online-based integrated approach.
This includes data-mapping and demography building as well as formalising processes and bringing all the cultural activities, under one web-based umbrella. They will conduct talent hunt competitions at block and national levels in India, and also will aid in keeping a direct communication channel open between artists and the government, as well as between artists too. This will ensure they get the required support from each other when they need it.
The Ministry of Tourism has conceptualised two programmes -- Swadesh Darshan and Pilgrimage Rejuvenation and Spiritual Augmentation Drive (PRASAD). Both these schemes are aimed at boosting tourism by highlighting specific theme-based destinations. Swadesh Darshan has 13 circuits under its wing: The North-East India Circuit, Buddhist Circuit, Himalayan Circuit, Coastal Circuit, Krishna Circuit, Desert Circuit, Tribal Circuit, Eco Circuit, Wildlife Circuit, Rural Circuit, Spiritual Circuit, Ramayana Circuit and the Heritage Circuit that would be developed to lure more tourists. 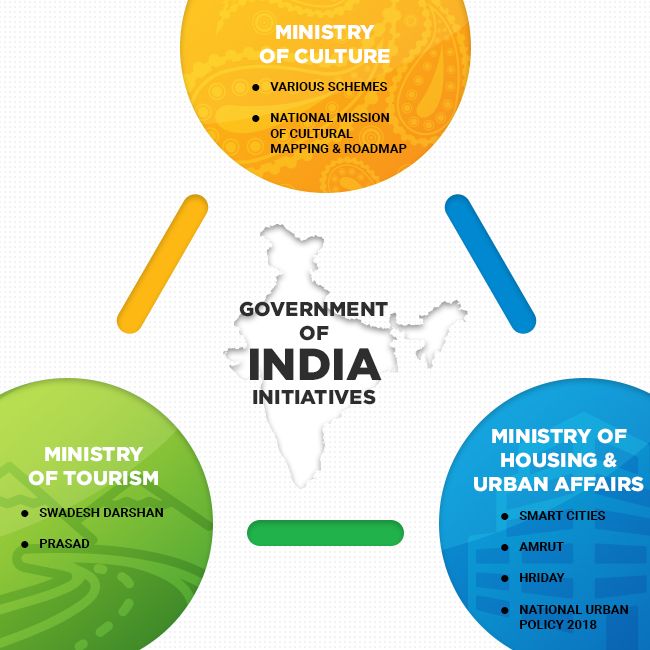 Under the PRASAD scheme, Ajmer, Amritsar, Amravati, Dwarka, Gaya, Kamakhaya, Kancheepuram, Kedarnath, Mathura, Patna, Puri, Varanasi and Velankanni are the cities that have been identified for structural development.
A clutch of financial assistance schemes are available that promote everything from Tibetan art to Himalayan heritage, as well as providing funding to NGOs and societies for supporting conferences, research and exhibitions. Then there are quite a few to preserve the museums too but for all of this to work in sync, some hurdles have to be cleared. These are:
Most of the current top hot-spot cities like London, Amsterdam, Paris, Rome, Venice, Rio, Budapest and Prague all have strong cultural IDs that resonate with travellers -- so much so that sometimes, even the armchair variety want to keep themselves updated with what’s happening in these cities more than their own! But they also have strong social infrastructure in place which makes it easy for these cities to capitalise on their many charms.
Indian cities have not done a great job of marketing themselves abroad as much as other global cities have, despite having 37 World Heritage sites, two well-known film industries (in addition to many regional ones that are now catching people’s attention), and a multi-faceted and vibrant heritage. All this doesn’t change the fact that we have high levels of pollution -- 14 out of the 15 most polluted cities in the world are in India. Our poverty is not photogenic unlike the favelas of Brazil and our civic sense is appalling, which sadly, we can’t import from overseas! Nonetheless, a beginning was made with the ‘Vibrant Gujarat, ‘Aamchi Mumbai, ‘Khusboo Gujarat Ki’, Madhya Pradesh’s ‘MP Gajab Hai, Sabse Ajab Hai’, and Rajasthan’s ‘Jane Kya Dikh Jaaye’ campaigns. To scale this up big time is the need of the hour, and the time to wake up is now, especially with a slowing down economy.
Manali Rohinesh is a freelance writer who explores financial and non-financial subjects that pique her interest.
Read her columns here.
Check out our in-depth Market Coverage, Business News & get real-time Stock Market Updates on CNBC-TV18. Also, Watch our channels CNBC-TV18, CNBC Awaaz and CNBC Bajar Live on-the-go!