The quiet elegance of Bauhaus-inspired watches

The quiet elegance of Bauhaus-inspired watches Bauhaus (‘house of structure’ in German) was both a Utopian movement, and a school of fine arts and design that rose from the ashes of WW-I, in Weimar, Germany.

About two months ago, on the sidelines of a vintage car rally in Mumbai, I encountered a watch enthusiast who clicked photographs of people’s wrists against the shiny and swoopy cars all around and uploaded them onto his Instagram account. Over the course of that morning, his social media account bloomed with Rolexes, Cartiers, Omegas and Breitlings. He also photographed my own watch — a Junkers — and showed me the one he was wearing. It was a Junghans. Junkers and Junghans are both German brands, but they also have another thing in common: Their allegiance to the principles of Bauhaus design.

Bauhaus (‘house of structure’ in German) was both a Utopian movement, and a school of fine arts and design that rose from the ashes of WW-I, in Weimar, Germany. The idea behind Bauhaus was to unite craft and technology and create products for mass consumption. “We want to create the purely organic building, boldly emanating its inner laws, free of untruths and ornamentation,” said its founder, the architect Walter Gropius. 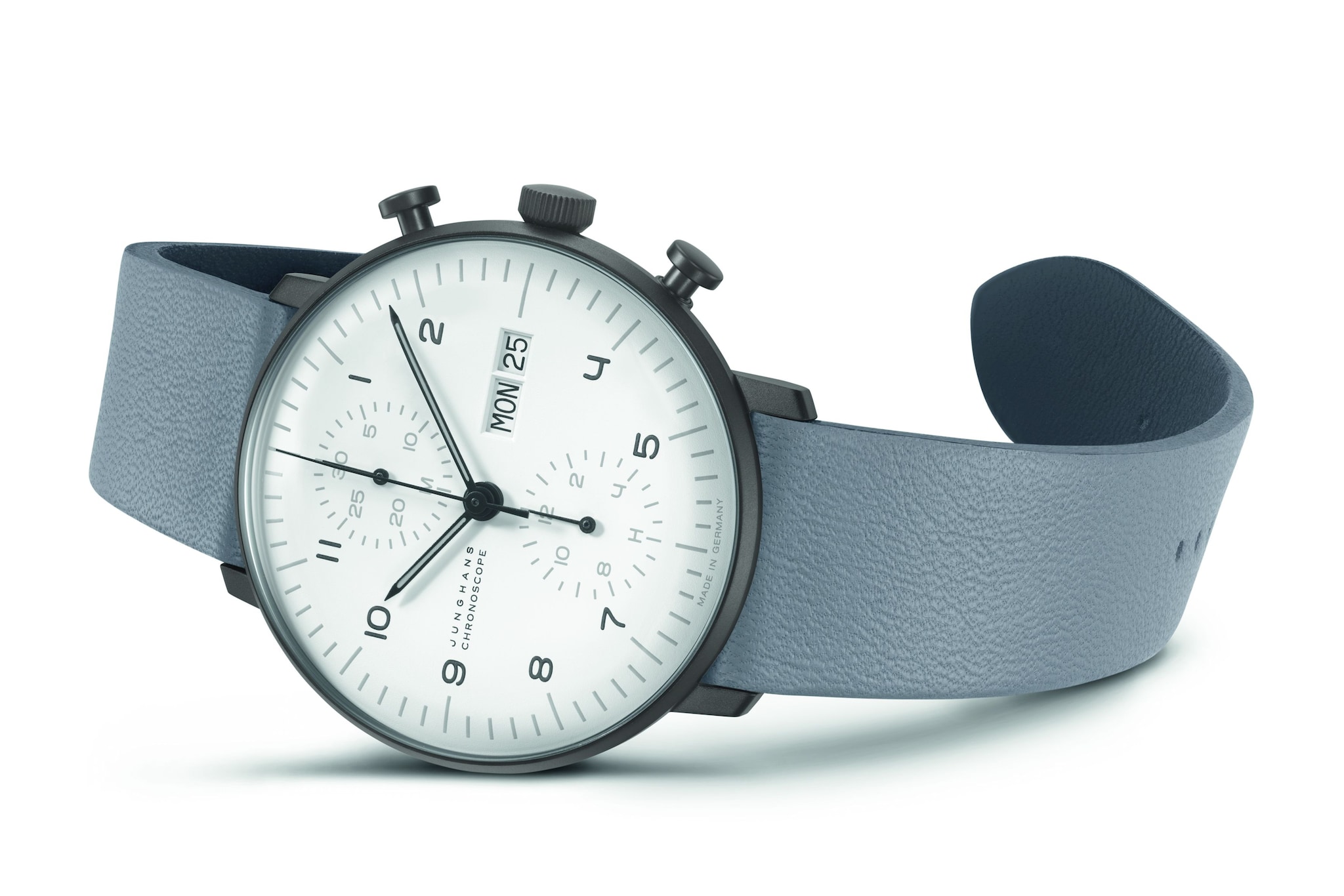 Max Bill Chronoscope.
Bauhaus encompassed several disciplines, from architecture and graphic design to furniture and painting and ceramics. The academy, which moved to Dessau in the mid-1920s, was shut down by the National Socialists, who found it too avant-garde and non-traditionalist for their liking, but its ideas resonated all around and across the ages, and still do. Some of the iconic designs born out of the movement include Seagram Building, in Chicago, by the great architect Ludwig Mies van der Rohe, who was once director of the academy, the Vitsoe 606 Universal Shelving unit by Dieter Rams, the Helvetica typeface, 1998’s Audi TT sportscar, and the Apple iPod. The Bauhaus building in Dessau.
The minimalistic aesthetic also found an echo in watchmaking, and if you too, like this writer, are into watches that achieve a quiet and elegant blend of form and function, you’ll love Junghans. Based in Schramberg, Junghans has been around since the 1860s, but they are especially known for the series of eponymous mechanical watches created for them by the graphic and industrial designer Max Bill in 1961. Junghans still produces the series and it is largely unchanged. Last year, to celebrate the centenary of the Bauhaus school, it released the Max Bill Chronoscope 100 Jahre Bauhaus. The watch’s silver dial and the case are inspired by the white walls and the anthracite facade of the Bauhaus building in Dessau; the red accents are a nod to the red entrance door of the building; and the grey strap references concrete, the material the building is built of. The limited-edition watch, powered by a self-winding movement, costs over Rs 1.5 lakh and in case that sounds like a bit too much at the beginning of the year, I’d recommend you take a look at 2020 Max Bill models that follow a black and white theme, and also feature a quartz movement.
The watches made by Junkers, named after Hugo Junkers, a German aircraft designer and a supporter of the Bauhaus movement, cost a lot less than Junghans, but they are no less elegant and their Bauhaus range has some interesting options. These include the Junkers Bauhaus 6060-5 that is powered by a Miyota movement and equipped with a 24 hours sub dial and a power reserve indicator.

Tangente 33 Blue.
Other notable brands that do Bauhaus well include Stowa, Defakto, and Ruhla, but if nothing but the best will do for you, let me point you towards Nomos. Located in the little town of Glashutte along Germany’s border with the Czech Republic, Nomos makes excellent minimalist mechanical watches. Two years ago, it released Tangente editions — nine watches — to prepare for the Bauhaus centenary celebrations. While these have, of course, sold out, but last November, they released two new Tangente mechanical timepieces with a midnight blue dial — in both 35mm and 38mm — that serve as reminders that when it comes to making a quiet statement, German watches at times do the job way better than the Swiss.
Murali K Menon works on content strategy at HaymarketSAC.
Read his columns here.
Check out our in-depth Market Coverage, Business News & get real-time Stock Market Updates on CNBC-TV18. Also, Watch our channels CNBC-TV18, CNBC Awaaz and CNBC Bajar Live on-the-go!