The Malabar House, part of the RARE India community (with the finest 'conscious luxury' boutique hotels, heritage palaces, retreats and wildlife lodges in the subcontinent), is at the core of how Fort Kochi saved its soul from mindless development.

In a quiet corner of a lush, atmospheric Fort Kochi, in an enclave that is more a well-preserved heritage town, stands a gem of a hotel — The Malabar House. This (the enclave, not the hotel) isn’t what we expect to see in India, where we are used to stumbling across narrow stretches of old buildings that have, by some hand of providence, escaped demolition.

The Malabar House, part of the RARE India community (with the finest 'conscious luxury' boutique hotels, heritage palaces, retreats and wildlife lodges in the subcontinent), is at the core of how Fort Kochi saved its soul from mindless development. Land records reveal that the white structure with a quintessential tiled red roof — a fine example of the coastal state’s colonial architecture — was built in 1755 when Dutchman Jan Herman Clausing bought it from one Mathew Henrich Beyls. Over the centuries, it has hosted spice and tea traders, as well as bankers. Joerg Drechsel, the German who owns it today with his Spanish wife, Txuku, bought it in 1997 and turned it into Kochi’s first heritage hotel. Bose Krishnamachari.
They set the ball rolling which ultimately led to more homes, commercial spaces, tea and spice warehouses being restored to host striking hotels, restaurants, fashion boutiques, design stores, art galleries and cafes. Bose Krishnamachari, who co-founded the Kochi Muziris Biennale, says, “It is like a European city: Cafes, heritage hotels and eateries abound, the traffic is manageable and people are used to international travellers. Muziris, an ancient seaport and urban centre lies close to Kochi. I find the 450-year-old city’s history to be very fascinating. Not many people know that the Jewish community, which was slaughtered everywhere, was protected here. Kochi itself has 13 communities and people speak different kinds of languages. UNESCO is working with the local city council and INTACH to develop museums and restore certain buildings belonging to different communities.” 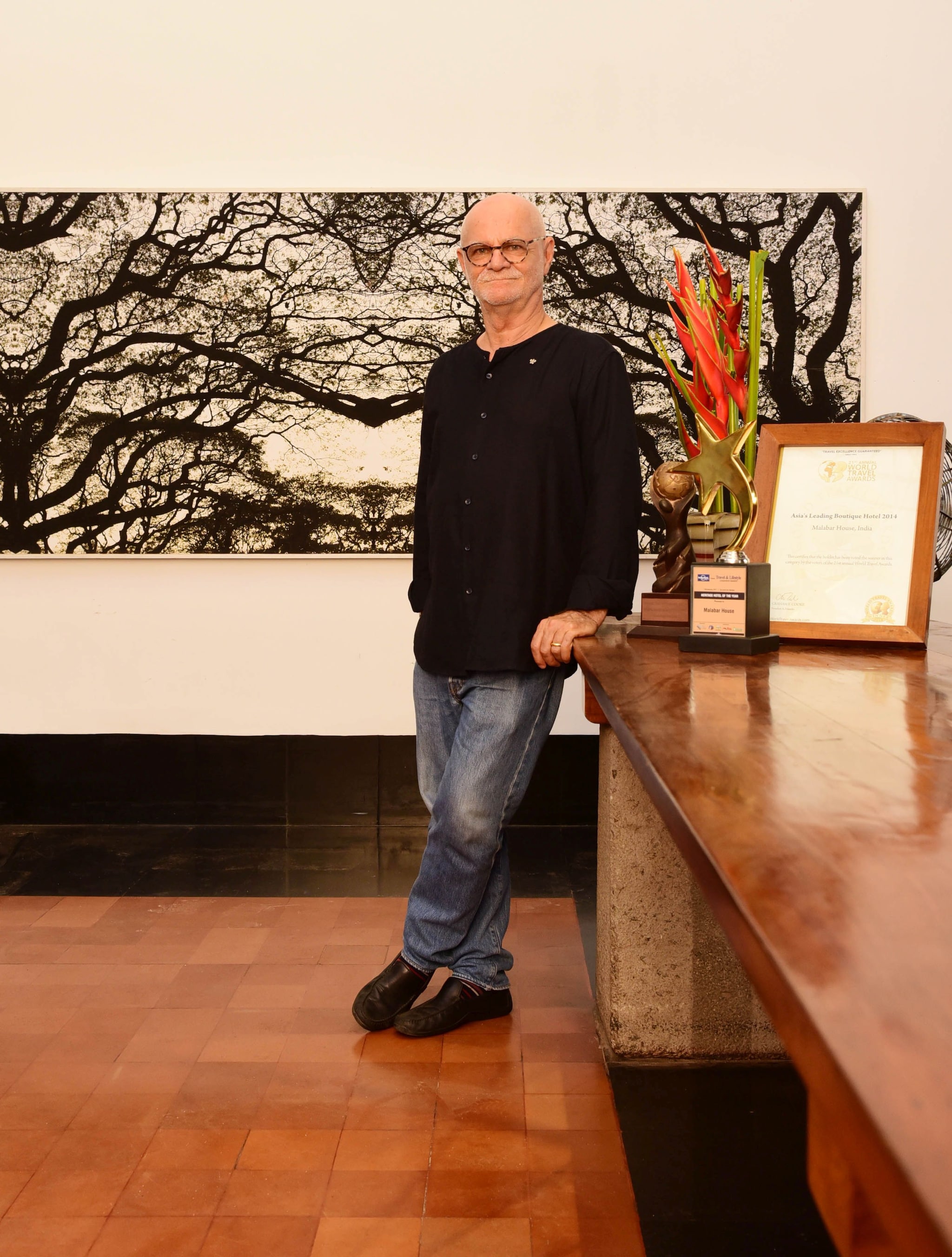 Joerg Drechsel.
Drechsel remembers coming to Cochin while on a backpacking tour through India 47 years ago, three years after the British moved out of businesses in the enclave. “Till 1968, the Kochi club had only British members. I remember staying in the Excel Hotel, which was full of business travellers. Like Mumbai, it has water on three sides and has been home to different communities,” Drechsel says. “In Kerala, the Hindu, Muslim, Christian and Jewish communities have flourished together, creating an umbrella culture with a common language and a shared way of life.” The Maharaja of Cochin was known to have welcomed both the colonists and migrants from other parts of India. A major flood in 1341 (which opened its estuary to the Arabian Sea, transforming it into one of the finest natural harbours in the east) further attracted the traders and the merchants. “This composite culture is what we are trying to preserve,” he adds. 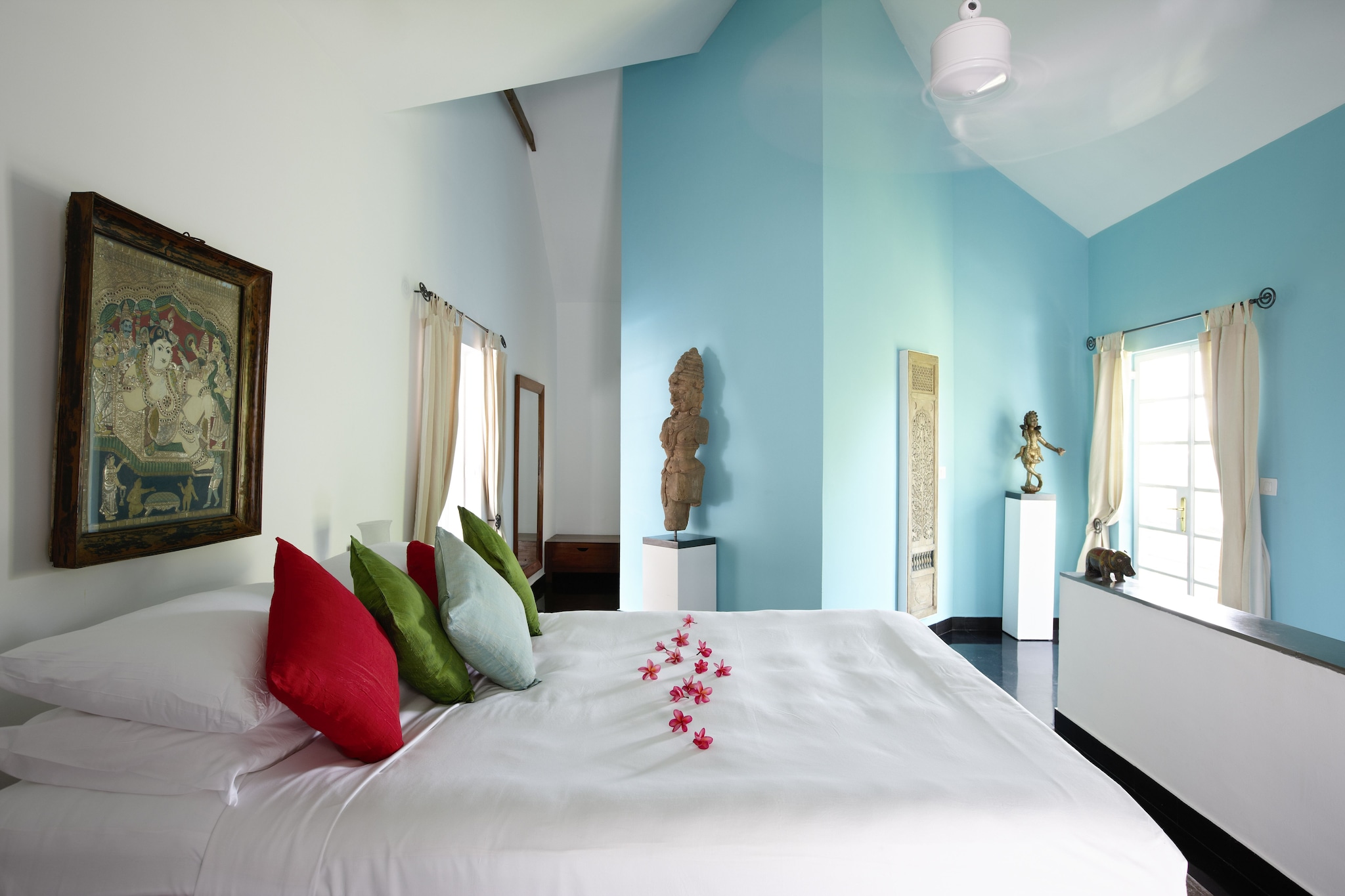 The Malabar House.
World over, luxury entrepreneurs, hoteliers and restaurateurs are creatively readapting old buildings and heritage. Old homes in London have been restored into hotels and an old theatre in Paris is now a fine dining restaurant. Something similar has happened in Fort Kochi. In 1994, Drechsel and Txuku, who kept returning to Kochi, stumbled across what is today The Malabar House. Owned by Grindlays Bank, it had creepers growing through its walls and stood abandoned. “We fell in love,” says Drechsel. The two bought The Malabar House and began converting it into part-hotel, part-residence, designed and restored by Drechsel, who is also an artist, with art and heritage architectural elements at its core. They ended up never living here. The soft-spoken hotelier, who lives in a waterfront home, says the restoration attracted quite a bit of foreign press and international travellers.
The Malabar House is now part of Malabar Escapes, a group that also runs intimate boutique stays across the backwaters. The exceptional hotel is a timeless space layered with vernacular design language. Four-poster beds, propeller fans, planter chairs, ritualistic masks, delicately restored wood pillars reclaimed from Kerala’s traditional Tharavad are all part of its understated design palette. The art is a blend of contemporary and traditional, including Drechsel’s stunning black-and-white photographic works. There are colonial flourishes in the architecture and the design, “a sort of Anglo-Indian dialogue,” says Drechsel. “Traditional craftsmen still have the skills but lack the patronage. You have to work with them if you don’t want the space to portray a souvenir-kind of look. But they come back with practical solutions.”
Over the years, the art-infused hideaway has attracted several patrons. Saji Joseph, a career hotelier who joined Malabar Escapes a while go, brought in his experience as well as his understanding of Indian travellers, who are they attracting much more of. They changed the bathrooms (which resemble lavish vanity rooms), the air-conditioning, and the water supply systems. “The requirements of Indian travellers are very different from that of international ones,” says Joseph, “in the comfort and luxury they desire, the service, and even their expectations from their vacation. But at the core, The Malabar House continues to be a beacon for heritage conservation and offbeat experiences.”
The transformation of Fort Kochi
A large part of the native population continues to call Fort Kochi home: The island enclave has neatly segmented homes belonging to different communities. Close to the waterfront, where The Malabar House stands, are a slew of heritage buildings and experiences: St. Francis Church, home to the original gravesite of Portuguese explorer Vasco de Gama; sculptural Chinese fishing nets brought to the city in the 14th century; warehouses and offices of spice and tea traders such as David Hall, Pepper House and Aspinwall House, which now host cafes, museums, design stores and art galleries and are venues for the Kochi Biennale. 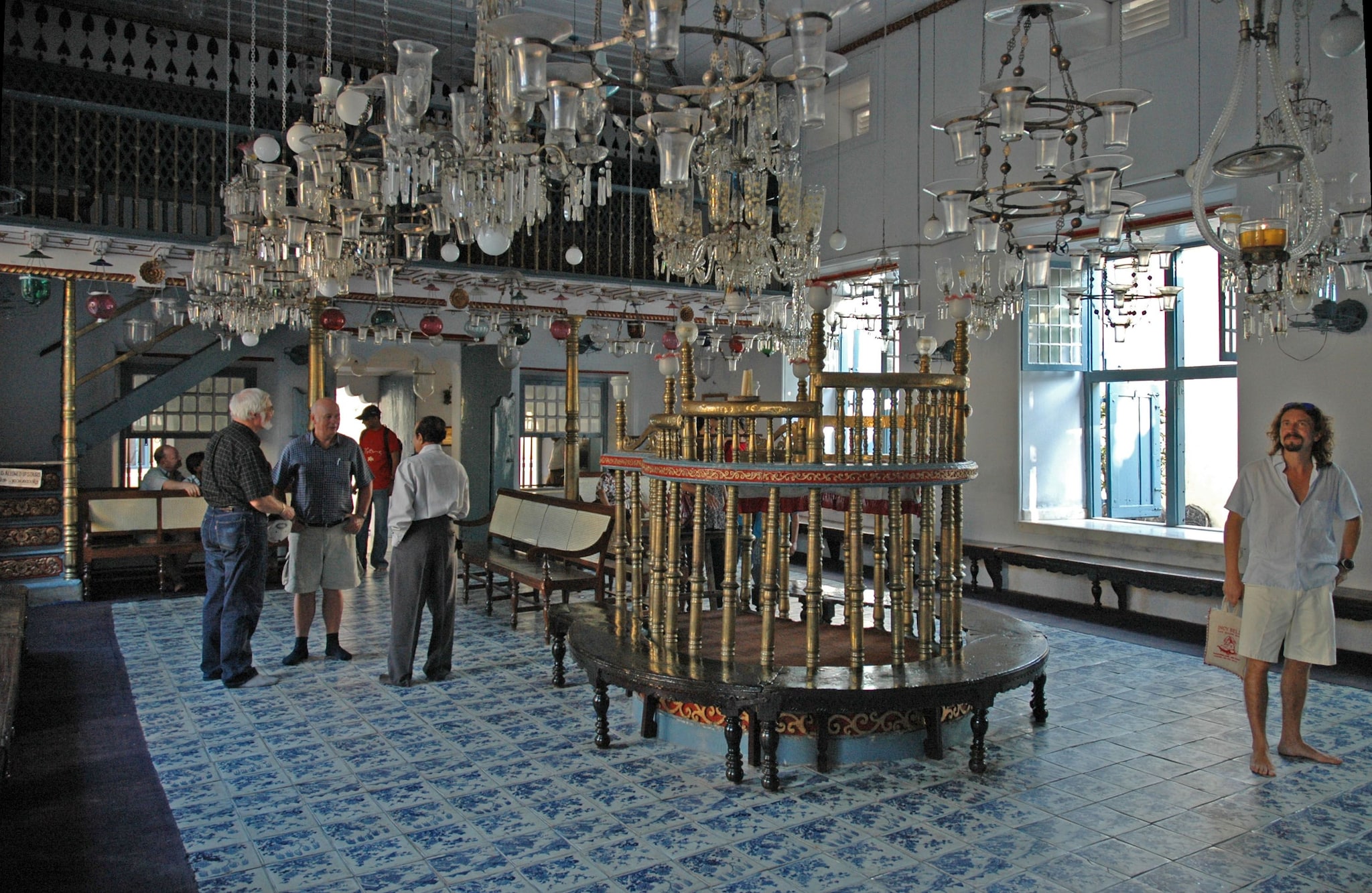 The synagogue in Kochi.
Drechsel says that the Anglo-Indian population that called Fort Kochi their home has passed away and their children have migrated. “The state government has recognised the need to preserve this sea enclave, at least in part, and banned tall buildings or unplanned development.” The Malabar House’s formidable reputation as Kerala’s foremost heritage hotel dovetails neatly with the enclave’s emergence as a hotbed of creativity, with entrepreneurs, artists and designers using Fort Kochi as a canvas for their experimental ideas.
Hotels such as Brunton Boatyard are established in a shipyard from the British times, which has been restored to tell a narrative of the colonial past. The late Anoop Sarkar, co-founder of Cochin Carnival, and his wife, Dorrie Younger, reimagined Fort Kochi as an art haven much before the Biennale and set up the Kashi Art Café. The gallery and café have supported many an artist, says Edgar Pinto, to whom Sarkar ultimately sold it. Kochi Biennale, with its first edition in 2012, further cemented the sea enclave’s reputation as a nucleus for art, with new galleries such as Gallery OED and URU Art Harbour. Any such buzzing enclave (like Covent Garden in London or Soho in New York) has to have more than heritage and art. Fort Kochi has plentiful of it. The Malabar Junction offers an inventive dining experiences; Shivji Shashidaran, a young genius chef, puts his global work experience to create a cuisine that is both inventive and classic: a test tube of tomato water to freshen you up; salted turmeric tulle over a juicy tender squid; succulent tiger prawn in a bed of leek espuma; Pulioche masala egg curry or that fabulous eggs cooked three ways. “I play around with fresh ingredients and flavours to create completely new dishes,” he says simply. “The food is part-Kerala, part-European and a lot global.” At the vegan eatery, Loving Earth by New Zealander Bree Mcilroy, nuts, seeds, soya and coconut come together in desserts and dishes. Café Verandah at Aspinwall House sources freshly made caper butter and moringa bread from Ishka Farms close by. 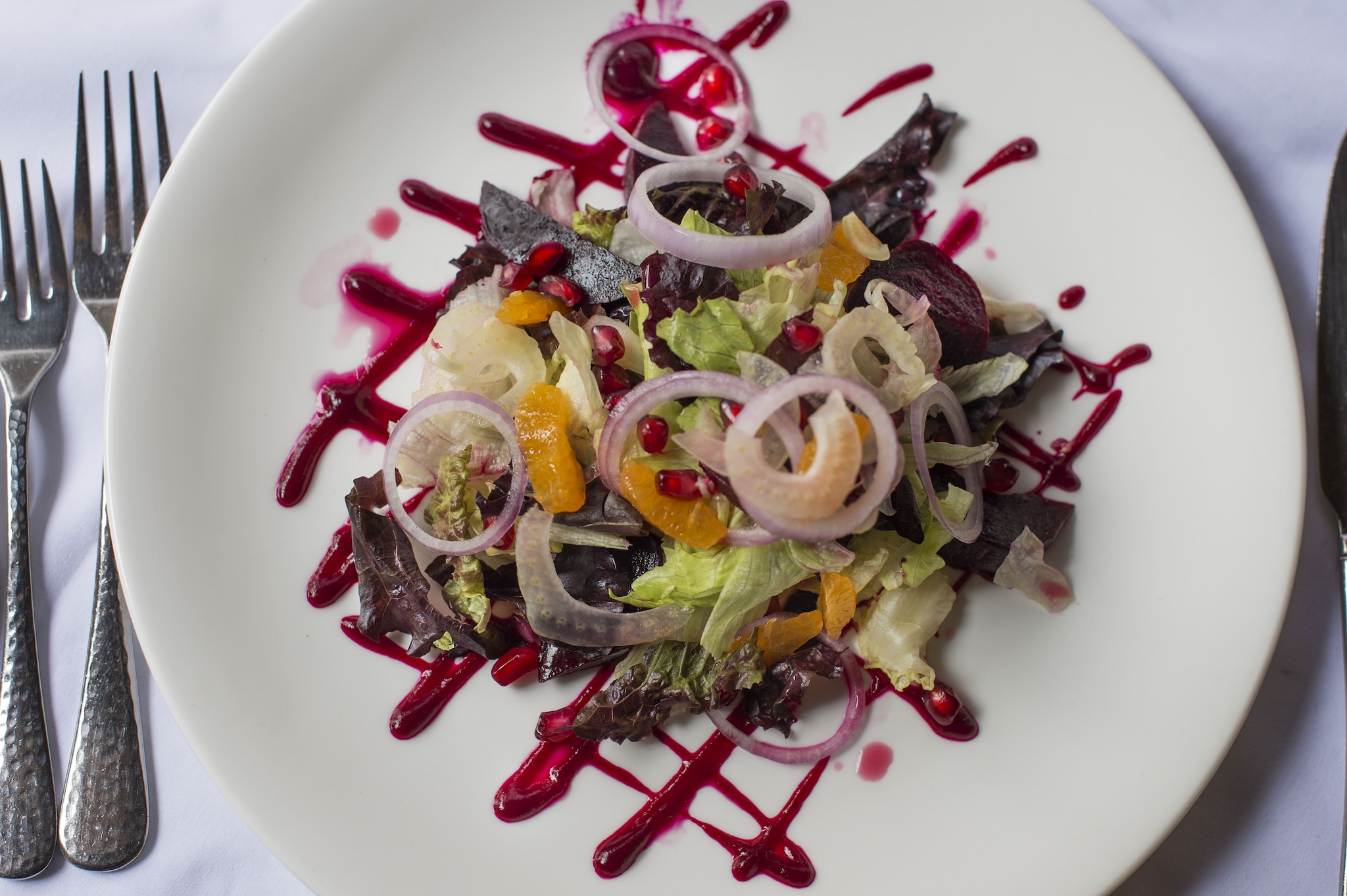 Boutique fashion studios and stores abound, but a few are exceptional. The Design Store at Pepper House has been reimagined by businessman Isaac Alexander into a 400-year-old, 20,000-square-foot warehouse complex with gallery spaces, artists’ studio, a spectacular library with books on art and design, and a design store that sells indie fashion and accessories. “Kochi needed an event such as Biennale to reinvent itself as a destination,” he says. NIFT graduate Archana Nandal, who grew up in Agra, surrounded by resplendent Mughal era heritage, runs Cult Modern, dedicated to experimental Indian designers. “You receive a lot of global travellers in Fort Kochi who are open to buying experimental new Indian fashion,” she says. “Last year was a bit sad on the business front because of the floods, but 2019 has picked up quite well.”
Kerala-based designer Sreejith Jeevan has his brand store Rouka, where he sells straight-cut monochrome dresses and asymmetrical jackets. Designer Joe Ikareth, a NIFT graduate, retails his label of bias-cut, structured dresses made from traditional fabrics from his chic store. Bangalore’s Cinnamon has an outpost in a charming bylane and retails clothing and accessories from designers such as péro, Rasa and Priyadarshini Rao. Kochi street art.
It isn’t easy doing business in Fort Kochi. Drechsel points out, “There is no single authority giving permissions. When the British and the Portuguese left, the different government agencies took over. Much of the heritage is governed by the Archeology Survey of India. The Parade Grounds, where we are located, belongs to the state government. For one of our properties, Trinity, it took us seven years to get requisite permissions.” The fear that one day Fort Kochi may find itself overrun by tourists and home people will hopefully remain just that: vast parts are protected by heritage rules: real estate is very expensive on the beachfront, and the Malayalee fishermen are still around. “It will help preserve the sanctity of the enclave and its culture,” says Drechsel with some sort of finality.
Deepali Nandwani is a journalist who keeps a close watch on the world of luxury.
Read her columns here.
Check out our in-depth Market Coverage, Business News & get real-time Stock Market Updates on CNBC-TV18. Also, Watch our channels CNBC-TV18, CNBC Awaaz and CNBC Bajar Live on-the-go!