Senator Kamala Harris has been a rallying figure for many women, and South Asians for Biden, a grassroots organisation headed by Neha Dewan organised a virtual event for women where Harris herself weighed in on how South Asian women can usher in a new wave of leadership.

"We are stronger because of our diversity, not in spite of it," said Harris. "And to all the young women watching this, I just want you to know that leadership starts the day you are born. You are never too young or too old to be a leader. So get involved in your community, run for office. Whatever you do, it matters. Just lead and don't listen that it can't be done because I never have."

Harris described each of the panelists as "incredible trailblazing women who are ready to usher a new wave of leadership". So here we meet a few of the women on the panel and discover how they draw inspiration from Harris, as do so many young Indian-American women.

Dewan emphasised the significance of Harris’ selection as the vice presidential nominee at the event. “Four years after Secretary Clinton’s devastating loss, I now have a daughter who, unlike me, will have many women, especially South Asian women in public service and leadership roles she can look up to. To be able to tell Mila that she can be the Vice President and the President some day, and show her someone who looks like her on the national stage is so significant and empowering,”

Harini Krishnan who was a lead volunteer organiser in California for Harris’ campaign in 2019 is now a State Director of South Asians for Biden. As a mother of two daughters and herself the daughter of a mother who came from Tamil Nadu in search of a better life, Krishnan identifies closely with Kamala Harris. “Her nomination as vice president signals a new era of diversity in our nation's history, one that celebrates and lifts women and women of colour to all places where decisions are made.”

A former CA lead volunteer organiser for the presidential campaign of Senator Kamala Harris, she joined the Biden Finance Team, Women for Biden, AAPIs for Biden, and was elected as a Biden District Delegate to the 2020 Democratic National Convention. In addition to her involvement with VP Biden's campaign, she is an elected AD 22 Delegate and Platform Committee Member of the CA Democratic Party; a Board Member of Fund Her, which elects progressive women and is currently enrolled in the Harvard Kennedy School's Public Leadership Program.

The virtual event was moderated by another strong Indian-American woman Mini Timmaraju who has led federal, state, and local campaigns, as well as advocacy efforts for nonprofit organisations. She served as a national director of the National Council of Asian Pacific Americans, and is on the board of Emily's list, supporting pro-choice democratic women candidates, and the Indian American Impact Fund. “I think the sky's absolutely the limit,” she says, “We have a candidate on the actual ticket who is from our community, who shares so many of the similarities to our stories, and that has shattered all the glass ceilings so I really am optimistic about the inclusion that we're going to see and this administration once it gets into power.”

Dr Nina Ahmad, a Democratic nominee for the office of Auditor General in Pennsylvania, is the first person of colour and immigrant to be a candidate for statewide executive office in a critical state. She previously served as the deputy mayor of Philadelphia, the president of the Philadelphia chapter of the national organisation of women, and on President Obama's Asian American and Pacific Islander National Advisory Commission. 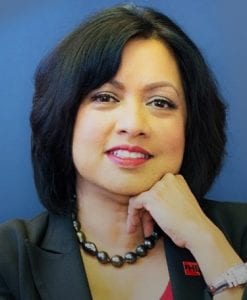 Dr Nina Ahmad, a Democratic nominee for the office of Auditor General in Pennsylvania, is the first person of colour and immigrant to be a candidate for statewide executive office in a critical state.

“Having lived through a war of independence as a child, I'm keenly aware how much effort it takes to get your voice heard,” says Ahmad. “And for senator Harris to be where she is, is an amazing feat, and it has been a long time coming.”

As she points out “A strong factor is realising that it’s a joined effort and we don't stand just here by ourselves. Everybody's work here today and before that allows us to be here today as an immigrant, to be able to even come here, you know, without the civil rights movement I wouldn't be here.”

Kesha Ram has served four terms in the Vermont House of Representatives, where she was elected the youngest legislator in the country. She recently won the primary election to serve as Chittenden County and Vermont State Senate.At the age of 34 with her possible election in November she could become the first woman of colour, and the youngest woman in history to serve in the Vermont Senate.

“I was privileged with having Senator Kamala Harris in my life for a long time, as a native of California,” she says. “I grew up in my Indian immigrant father and Jewish-American mother's Irish pub in Los Angeles, so having someone with her story just paved the way for me entirely.” Discussing the challenges of running for office and making a positive change, she emphasised on the importance of taking risks, and running for office even if there’s the possibility of losing.

Harbir Bhatia, currently a candidate for Santa Clara City Council in Santa Clara, California, serves on multiple local and national boards. She says, “As a Sikh woman, you are brought up to think of equality and justice and to fight for the rights of others.” She finds that most south Asians don’t see themselves reflected in the American leadership, and the feeling is not to create waves and just be accepted.

“But that is where the problem lies,” she says. “We need to speak up and be more relevant and be more prevalent and I think this is an opportunity in a time where it's not just only our responsibility, but the doors are open to do so. We need to ensure we encourage our children to be more civically engaged, to be themselves part of the voting process, to know that you have the right to shape your future. And that doesn't mean being on the sidelines, it's time to be more actively engaged.”

As Nina Ahmad observed, Kamala Harris will “reflect us and we will reflect her. I'm very hopeful this ticket gets into office. I think we're going to see a different America, an America that reflects all of us, and I'm really excited and hopeful about that.”