Sweet success: Why these bean-to-bar chocolate brands are growing 100% year on year

Updated : October 10, 2019 01:46 PM IST
Chordia is of the opinion that we do not differentiate between a sugar craving and a chocolate craving.
Bean-to-bar chocolate makers work with raw cacao beans sourced from farms.

Nitin Chordia speaks eloquently about chocolate, as any certified chocolate taster — he is, in fact, the country’s first — should. Over the years, Chordia, who recently launched Kocoatrait, “the world’s first zero waste, bean-to-bar craft chocolate brand”, has conducted over 500 tastings across India, and has some pertinent observations to make about how most Indians perceive chocolate.

Chordia is of the opinion that we do not differentiate between a sugar craving and a chocolate craving. As importantly, he says we consume dark chocolate assuming that it is healthy. “Many dark chocolates sold here contain milk/ghee, and it negates any possibility of our bodies utilising the antioxidants found in cocoa. Plus, even 50 percent dark chocolate has a lot of sugar,” he says. Moral of the story according to Chordia? We have still some way to go before we get over our fixation with big global brands, but at the same time, he finds the growing number of bean-to-bar companies on the shelves of — mostly — high-end stores heartening. Bean-to-bar chocolate makers work with raw cacao beans sourced from farms. These beans are roasted, winnowed and ground into chocolate. They eschew the use of emulsifiers and synthetic flavours, among others, and are focused on transparency and sustainability.

The next time you find yourself in an upmarket grocery store, take a closer look at the gourmet section. Chances are you’ll find a bunch of Indian bean-to-bar brands, most of which have been launched in the last four to five years. These include Mason & Co; Didier & Frank, Earth Loaf, Paul & Mike, and Pascati. “I suppose there are at least ten such brands. They constitute less than .01 percent of the about $1.3 billion domestic chocolate market, but they are growing 100 percent year on year. It’s a lot like gourmet coffee. There is a lot of curiosity about them,” says Chordia. 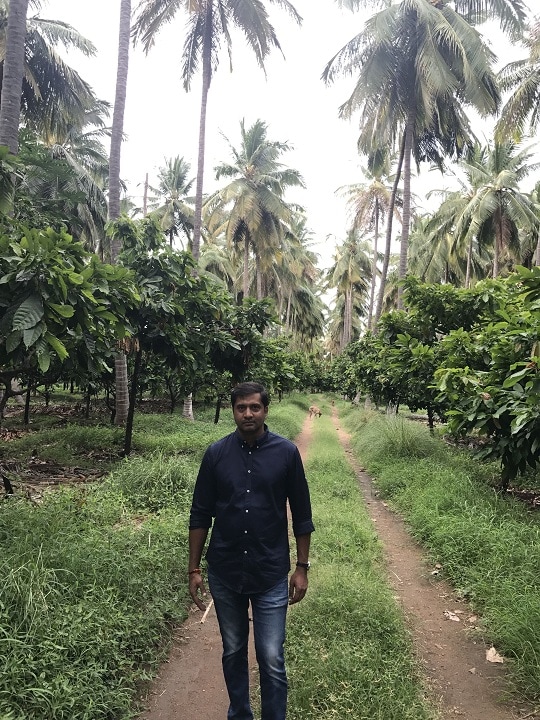 It is exactly this curiosity that textile businessman Karthikeyan Palaniswamy and his brother-in-law and cacao farmer Harish Manoj Kumar wanted to tap when they launched Soklet in 2017. Palaniswamy's claim about Soklet, a Tamil Nadu-specific corruption of ‘chocolate’, being the country’s first ‘tree-to-bar’ brand is justifiable, since the cocoa used by the company is grown at their own “pesticide-free” plantation in Pollachi. “My wife’s family has been growing cacao for several years, and Soklet was born after a round of drinks with Harish,” says Palaniswamy. Soklet is indeed a family affair. If Harish grows the cacao, Palaniswamy is in charge of the chocolate making, while his wife Sujini work on the branding (the packaging is inspired by Kanchipuram saris). “The cacao is grown along with banana, coconut and nutmeg, so these add to Soklet’s flavour profile.” Their line-up features, apart from dark chocolate in varying percentages, including a 100 percent offering, Filter Kaapi, Bhut Jolokia Chilla, and Candied Ginger. Palaniswamy especially recommends the 70 percent Dark Chocolate bar, which is made using only cacao beans and cane sugar. Among his main learnings after two years in the business? “There is still a huge mismatch between price and quality expectation in India,” says Palaniswamy. About three hundred kilometres from Pollachi, in Mysore, David Belo would probably echo Palaniswamy’s sentiment. Belo, a former London-based mixologist and baker, set up Naviluna (formerly Earth Loaf) in 2012. Belo mostly works with Kerala cocoa, but has also started sourcing beans from Karnataka after last year’s floods in Kerala. Naviluna’s offerings range from a spiced fig and walnut bar to caramelised mosambi and caraway and even jackfruit and black pepper. “Our Mysore Park Noveau, which used coconut oil and wholemeal gram flour, didn’t find favour with purists, but, on the other hand, there is a growing number of people who are open to newer experiences. And I’ll take hope from the fact that our bestseller is the intensely dark 72 percent Karnataka Single Origin Chocolate bar.”