Updated : September 13, 2019 10:30 AM IST
It may not be yet as well known in India, but Aberlour is making all attempts to change that reality.
Complex, infused with the sweet and nutty flavours, Aberlour epitomizes the elegance of a Speyside single malt that’s exclusively matured in ex-Oloroso sherry barrels.
The distillery is located in a picturesque setting, next to an icy-clear mountain stream and surrounded by the Ben Rinnes range.

Deep within Speyside, right beside a swift ice-water stream and surrounded by copper-leafed bushes, stands a distillery which makes one of the most underrated single malts.  One of the top-selling malts in France, this delicate scotch whisky is making a serious bid for the large Indian whisky market.

Most of Aberlour’s portfolio is available in the country and the single malt is backing interesting events to stay in news. Like the recent Rajasthani cuisine pop-up at ITC Grand Maratha in Mumbai, by ITC Windsor, Bengaluru’s Executive Chef Akshraj Jodha. The rustic-meets-elegant flavours of the traditional Akheraj Deolia cuisine perfectly blended with the smooth textures and flavours of the Aberlour 12 Year Old (12YO).

Earlier this year, I had the opportunity to explore Aberlour’s small and intimate distillery. The setting is magical. Aberlour (‘the mouth of chattering burn’ in Gaelic) derives its name from the eponymous town in Scotland’s Speyside, which is home to some of the best single malts from this part of the world. A clear mountain stream that cascades down the Ben Rinnes range, through wooded glens, flows past the distillery, before joining the River Spey at Aberlour, is the water source for this delicate whisky. A picture of an Aberlour the tasting room

The tour that began on a very cold winter morning was led by Colin Scott, master blender for Chivas Regal, who knows every story there is to tell about Scotland’s Lowlands, Highlands and Speyside and its gaggle of distilleries. “Aberlour’s rewarding depth of character derives from how it’s made, as much as the quality of the soft spring water and the other ingredients,” he says. “Aberlour whiskies are incredibly smooth and much like others in the Highlands, steer clear of smokiness. There is an emphasis on complex notes.”  The barley used for the single malts is grown a few miles down the road from the distillery.

In this part of the world, scotch whisky makes the economic wheel spin. Each distillery here and the single malt it makes, is considered an heirloom, a cultural heritage to be preserved against all odds.

Much like the way the founders of Aberlour have done.  In the mid-19th century, the glens of Speyside were home to illicit distilleries and whisky smugglers. Speyside’s lack of accessibility until the railroad boom ensured that these illicit operations escaped the eagle eye of the ‘gaugers’, the notorious whisky excise tax collectors. Then in 1822, King George VZI arrived in Edinburgh and asked for one of the scotch whiskies. He was pretty much hooked and his passion for the single malts helped catapult them into the big league, the drink of the aristocrats. 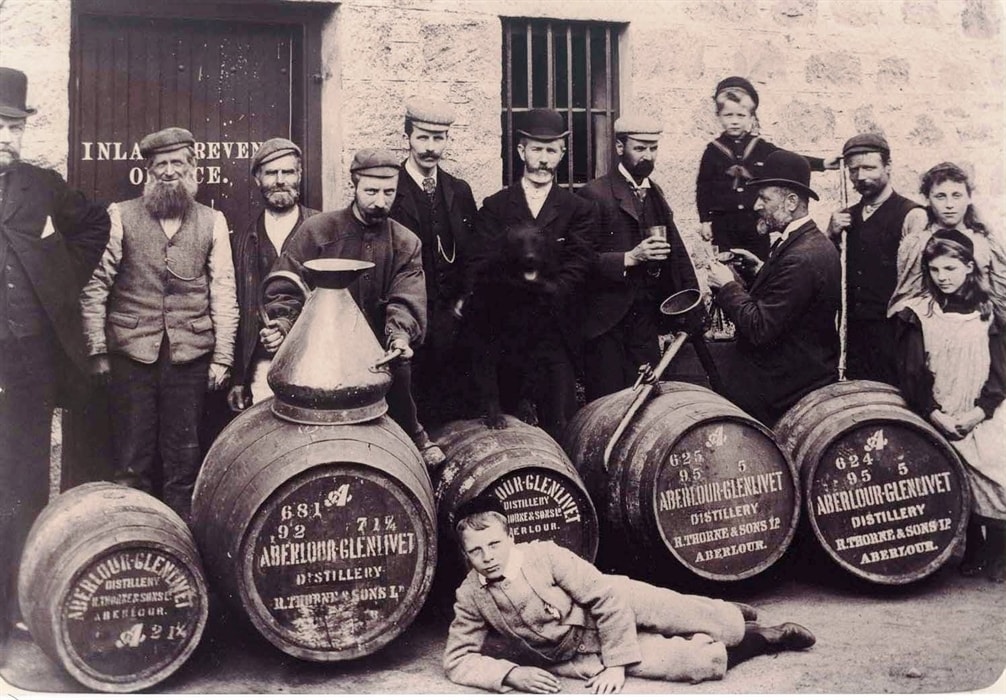 Am image of Aberlour barrels from 1879.

Put this in context of Aberlour, which traces its origins to 1879 and a local philanthropist, banker and distiller named James Fleming. He placed the Aberlour distillery in close proximity to pristine water sources: the Birkenbush Springs and the Lour Burn River. “At that point, Fleming used water from St. Drostan's well, named after an early Columban monk, which is situated on the site,” says Scott. Like many Victorian distilleries, Aberlour burnt down and, in 1898, had to be rebuilt.

From then to now, it has been an incredible journey of growth and evolution. “The Aberlour story is of community, locally sourced ingredients and families of craftsmen who are involved in making this whisky,” adds Scott, as we walk up to the huge germination vessels where the malt is made. Using traditional methods, Aberlour craftsmen turn malt into grist. Heated spring water is added to the grist in the dark, huge drums of the mashing machine; then, the grist put into a mash tun for the enzymes to convert starch into sugar. “The liquid you get is of a sweet, malty character,” says Scott, letting us smell and taste the still-warm malt, before walking up to where the distillation takes place. Most of Aberlour single malts are double-cask matured in ex-American oak caskets and ex-Oloroso Sherry butts.

The unusual Aberlour stills, in which the malt is distilled, are broad at the bottom and rise like a swan’s neck. “Most of Aberlour single malts are double-cask matured in ex-American oak caskets and ex-Oloroso Sherry butts,” says Scott. The liquid is allowed to stand for 12 years or more, helping it take on the complexities and flavours of the American oak casks and the Sherry butts.

The final stop at the tour is at a beautiful sun-filled tasting room, surrounded by the best of Aberlour. Across its various expressions, the whisky runs the entire gamut, from velvety smooth to lightly floral, with notes of citrus and dried fruit. Here is what you can expect from their portfolio and the whiskies you must try.

This expression is double-cask matured — in traditional American oak and seasoned Sherry casks, which impart balanced notes of fruits and spices to the malt. It has remarkable depth and a velvety texture; a tawny gold colour with hints of ruby; is very soft and rounded on the nose, with notes of apple and the sweetness of sherry, and has a warm, lingering finish.

Again matured in a combination of oak casks and sherry butts, this 16YO is well-rounded, sweet and spicy. The warm mahogany-coloured single malt has floral-meets-spicy nuttiness aromas. “On the palate, it is smooth and full of sweet floral and spicy flavours,” says Scott, whirling his whisky in his glass.

Among the most matured whisky in the Aberlour portfolio and one of the best, this complex, deep and spicy single malt shows a huge influence of the sherry casks, which add hints of spiciness and a liquorice tang. “This is far deeper, with a rich raisin character,” says Scott.

Launched in mid-2018, A’bunadh tastes of raisins and fruit cake. The single malt, bottled at cask strength, is robust and deeply intense. A’bunadh, in Gaelic, is defined as ‘original’; this expression was made to honour Fleming’s memory. The rich amber-coloured single malt has mixed aromas of spices, praline and orange;  deep notes of the Oloroso sherry casks in which it is matured; flavours of orange, black cherries, dried fruit and ginger, and has robust, bittersweet notes of spices, chocolate and oak, of course.