India’s merchandise exports during the first two-quarters of FY22 have shown remarkable resilience and growth, in the midst of the global pandemic.

Exports have often been the springboard on which most economies have witnessed remarkable growth.  While India’s merchandise exports as a percentage of GDP, has moderated from a peak of 16.6 percent in 2013 to 11.1 percent in 2020, India’s merchandise exports during the first two-quarters of FY22, have, however, shown remarkable resilience and growth, in the midst of the global pandemic.

Merchandise exports during the first half of this financial year, have been exceptionally high, with a sharp pick up in exports, witnessed in fact since March 2021.  While this could be attributed largely to the low base effect, especially during Q1, the pick up in global oil prices, recovery in external demand, and strong growth in advanced economies, have also contributed to this exceptional performance, with robust performance in non-oil exports as well. 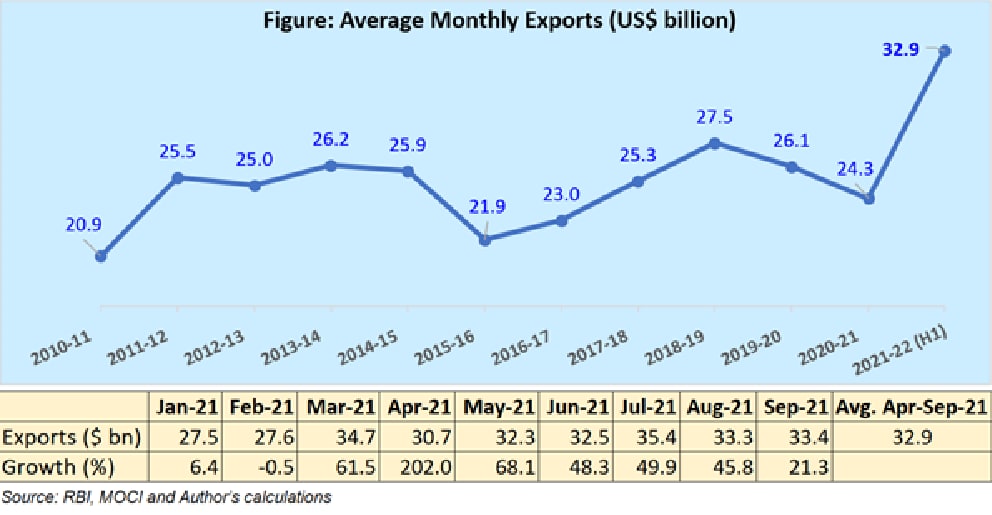 What makes this performance more noteworthy is that it was witnessed while India was grappling with the peak of the second wave of COVID-19 infections in the country during April-May 2021.  While there were some apprehensions of the possibility of growth in exports during Q2 of the current year relatively slowing down with the tapering of the very low base effect in Q1, the performance of exports during last quarter has in fact been a story of resilience.  Witnessing record exports of USD 102.15 bn during the last quarter (July-Sep 2021), this has been the first time ever that India saw quarterly exports of more than USD 100 billion.
Also Read: Exports jump 43% to $35.65 billion in October
It is interesting to note that not only has the growth in exports been consistently impressive since March 2021, the value of exports has also been remarkable, clocking more than USD 30.6 billion every month between March and September 2021.  Particularly, exports in July 2021, with an all-time monthly record high of USD 35.4 billion (Figure), have increased by 49.9 percent over the previous year, led by petroleum products, gems and jewellery, engineering goods, electronic goods, readymade garments, and chemicals.  Exports in August and September 2021 have both recorded more than USD 33 billion each.  Exports during H1 of the financial year have thus, been at an all-time record high.
It is evident that the average monthly exports during H1FY 2022, which amounts to USD 32.9 billion, is much higher than the average monthly exports witnessed ever in the past in India (except in March 2021, when the momentum started to pick up).  This certainly is in line with the present upbeat trend and sentiment being witnessed in India.
Targeting USD 400 billion Exports
With a focused approach and concerted efforts, India’s ambitious target of achieving USD 400 billion of exports for the current financial year, looks fairly achievable. There is certainly immense potential for India’s exports to grow manifold given the sheer size of our economy and domestic market, untapped manufacturing capabilities and a globally competitive strong service industry base.
With exports for the first half of the year already amounting to USD 197.6 billion, almost half of the set target is already met.  To achieve the USD 400 billion target, exports would need to register an annual growth of 37.4 percent in FY22, or a growth of 27.6 percent over FY20.  This is plausible given that India’s exports have grown by over 30 percent during a couple of years in the last two decades.
Expectations of pick up in global demand especially from developed economies and strong import growth in India’s leading export destinations for its top commodities of exports are expected to boost India’s immediate prospects for increased exports.
It is essential for India to seize the opportunities emerging from the changing dynamics of global trade and engagements, especially in the post-COVID era.  The new Foreign Trade Policy 2021-26 is expected to facilitate trade by reducing transaction cost and time while incentivising exporters through performance.
Factors Boosting Exports
The production linked incentive scheme which would help increase quality, efficiency and scale of manufacturing; the thrust given to promote districts as export hubs, under the one district one product approach aimed at globalising local produce; and the scheme for the remission of duties and taxes on exported products, could significantly benefit Indian exporters. The government’s Rs 33,000 crore boost for project exports through the National Export Insurance Account (NEIA) and the additional Rs 88,000 crore export insurance coverage for the trade sector are also envisaged to provide the much-needed financial impetus and policy support.  Entering into FTAs with partner developed countries, with substantial potential and market access, subsequent to the conclusion of negotiations currently underway, may also auger well for Indian exports.
Imperatives
Focus on tapping new markets and products, further expansion in existing markets and export commodities, identification and nurturing of niche products and simplification of procedures and regulations could significantly enhance the competitiveness of Indian exports.  Products and markets where India has been traditionally competitive but lost share in recent years to new competitors must be the immediate focus areas to regain our share. There is an immediate need within the manufacturing sector to shift structurally from low value-added products to high value-added products and services.  It is important to focus on quality and scale through digital manufacturing. India must recognize the opportunities arising from realignments in global production centres and supply chains in the post-COVID-19 world, and immediately capitalise on these developments by focusing on modernising manufacturing with digitalisation.
Conclusion
While external challenges persist, India must strive to leverage comparative and competitive advantages to increase its exports, while focusing on quality standards of products and processes, value addition, participation in the regional and global supply chain, and diversification of its baskets and markets.
The author, Dr Viswanath Jandhyala is an economist with India Exim Bank. Views are personal.
(Edited by : Aditi Gautam)
Check out our in-depth Market Coverage, Business News & get real-time Stock Market Updates on CNBC-TV18. Also, Watch our channels CNBC-TV18, CNBC Awaaz and CNBC Bajar Live on-the-go!