Will Indian airlines rise up to the Third Quarter challenge?

The capacity crisis in Indian skies was short lived. From overcapacity is killing airlines due to undercutting of fares to there is under capacity in India and airlines have hiked fares was very quick.

The argument was aided by an unfortunate event — the suspension of Jet Airways. While there is no evidence to prove that Jet Airways fall was a result of capacity, the principle of survival of the fittest played a huge role in the fall of the airline, amidst capacity addition (dumping?) by low-cost carriers.

The fall of Jet Airways had started in third quarter of last financial year, exactly this quarter last year when the airline reported a loss of Rs 1,297 crore. It was also the quarter when IndiGo posted a loss of Rs 652 crore.

World over, airlines adjust capacity to demand. A very popular way of planning for airlines, especially in Europe and North America. Unfortunately, the same is yet to take roots in India.

Indian airlines have gone full cylinders on when it comes to induction and data released by Airports Authority of India (AAI) and Directorate General of Civil Aviation (DGCA) for the last four years shows that there has been a fall in passenger numbers in the July – September quarter and rarely has this been matched by airlines with a dip in capacity, leading to emptier seats and pressure on yields culminating in lower profitability or losses, as was the case last year. 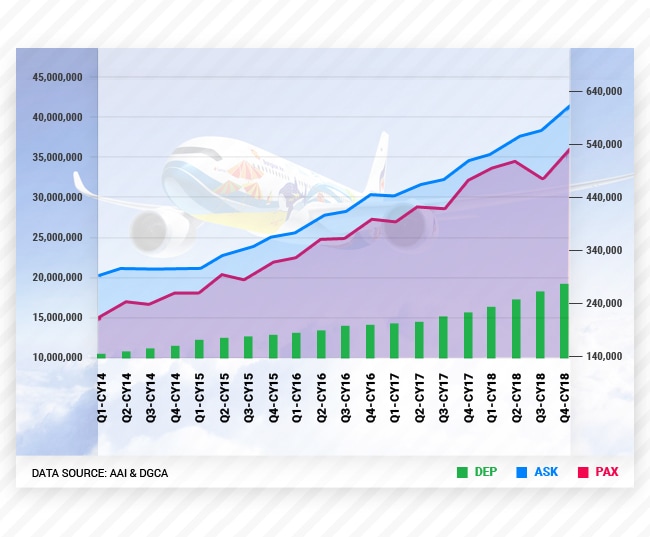 Airlines tend to get into a vicious cycle, going by the trend. An airline or airlines put together to add capacity in the market, in a quarter which is traditionally week and seen a dip in passenger numbers.

To fill up the additional seats, there is discounting. While this attracts passengers, they are the lowest yielding passengers who may not help recover the cost of operations. Going by the data, it is clear that even discounting would not have helped since there has been a dip in numbers which is far worse than remaining steady at best.

The 20 percent growth in passenger numbers, leading up to the fall of Jet Airways has not been uniform and rightly so since nowhere in the world is it uniform due to factors like weather, holiday season and business budgeting. However, these factors are mostly known and airlines have adjusted capacity to match the traffic, unlike India.

A closer look at the graph shows that while there has been a dip in passenger numbers, the capacity by Available Seat Kilometers (ASKM) and Departures has seen an increase, indicating that the gap widened in July – September quarter between the capacity deployed and passengers flown on the domestic routes.

What Happens This Year?

“Uncertain” is how best 2019 can be described so far. The capacity was sucked out of the market in the early months of 2019 and was back with double force starting May.

While airlines led by SpiceJet and Vistara have been inducting the B737 of Jet Airways, the entire capacity is not yet up and running. A large chunk of this, at least for Vistara came in June and is expected in July.

SpiceJet continues to induct aircraft and will launch international routes soon with these planes. The time taken to get the aircraft operational has meant that induction has been haphazard to gobble up the opportunity (slots) in the market.

This will lead to even higher induction at the end of June and July which will all be the spike in the July – September quarter of the year. If the past trend is anything to go by, the passenger numbers will not stand up to the capacity and the airlines could stare at another quarter of loss on what is already a business where profits are as thin as “boarding-pass”.

The capacity adjustment can be done by planning maintenance, reducing red-eye flights, and balancing crew time in the lean season. While it may have a negative impact on total revenue, in all probabilities it will have a positive impact on profitability as the market capacity adjusts to demand.

The marginal respite for airlines will be the fuel which is 7 percent cheaper currently than what it averaged during the same period last year. In the past, Rahul Bhatia of IndiGo had made a statement that they are recruiting foreigners to get the best of Network Planning and Revenue Management talent from the world. It will be interesting to see if any airline can get the best of capacity adjustments from its peers across the world.

This definitely is not the quarter to dump capacity and historical data has proved it.