Once a prince, now a pauper: J&K’s economic indicators paint a grim picture

Once a prince, now a pauper: J&K’s economic indicators paint a grim picture

Without getting into the politics of what is happening in J&K, this piece summarises (without attributing causality), the performance of the state in the last couple of decades. And it does not paint a pretty picture. The state of J&K is amongst the slowest growing states in the country. From being a state with above average per capita income, the state has slipped backwards with per capita income much below national average. The state neither has a strong manufacturing base nor tourism. And on the other hand, the state’s demographics are undergoing a change – the state today has amongst the best demographic profiles in terms of share of working age population but falling birth rates will mean that the favourable demographics will last for only a few more years before they turn into headwinds. The state is thus truly at a crossroads.

In terms of size of its economy, J&K is a relatively small state. In absolute terms, J&K is the 22nd largest state/UT in the country with a GDP as measured by Gross Value Added at Rs 970 billion ($14bn) in real 2011-12 prices. This means J&K is less than 1 percent of India’s GDP. This is perhaps not surprising given the challenging topology of the state. The problem is not the size of its economy but the lack of growth in it. In the last two decades, the state’s economy has expanded just over 5 percent in real terms, over 100 bps slower than the all-India growth. And even this seemingly small difference, once compounded, adds up to a big number over two decades. If the state of J&K had grown at the same rate as the entire country in the last 2 decades, its economy today would have been 25 percent bigger than what it is.
The only other large states which have grown at a comparable or slower rate in the last two decades are Assam and Uttar Pradesh. But these two states, along with other historically laggard states, have seen a sharp acceleration in growth in the last decade and their growth rates have broadly caught up with all-India growth. J&K (along with West Bengal) has been a notable exception where growth rates are still materially below all-India rate. J&K thus has continued to lag other parts of India in terms of economic growth.
The consequence of this slower growth paints a very stark picture when we look at per capita income. Three decades back in the 1980s, J&K was a relatively rich state. Its per capita income (per capita GVA at 2011-12 prices, back calculated) was higher than that of Gujarat or Maharashtra. But in the last two decades, J&K’s per capita GDP has grown at just 3 percent per year as against over 6 percent for Gujarat and 5.5 percent for Maharashtra. This has meant that from being higher than Gujarat and Maharashtra at one point of time, J&K’s per capita GDP is now around half of that of these two states. From being a state with per capita GDP 50 percent above all-India level, J&K now has per capita GDP 20 percent below all-India level. The so-called ‘BIMARU’ states have started to catch up with J&K. Rajasthan, amongst the ‘BIMARU’ states, now has per capita GDP higher than J&K. The state has thus become poorer relative to rest of the country in the last couple of decades.
What is driving this is the absence of business activity in the state. Take manufacturing for example. The entire state of J&K has just 1000 factories as per the Annual Survey of Industries (FY17). This is not even 0.5 percent of the total factories in India. In contrast a relatively backward state like Bihar has more than 3x the number of factories that J&K has. Even a small union territory like Daman and Diu has more factories than the entire state of J&K. Further, the factories that exist are not particularly labour intensive nor are they investing a lot of money. Thus, the share of people employed in organised manufacturing in the state of J&K is less than half the national average. And in the year ended March-2017, the latest year for which we have data, J&K saw just 0.2 percent of the total investments made by all the factories in the country.
Even in a sector like tourism the state is an underperformer, perhaps largely due to the security environment. As per government data, the state does not rank in the top 10 visited places either for domestic or international tourists visiting India. The state ranked respectively 18th and 22nd in domestic and international tourist arrivals in 2017, latest year for which data is available. The state received less than 1 percent of domestic or international tourists in the country. Even a small state like Uttarakhand for example gets almost 2.5x the number of domestic tourists and 1.7x the number of international tourists that the state of J&K gets.
What makes this above analysis stark is the demographic profile of the state. Share of working age population (age 15-59) in the total population is amongst the highest in J&K at 69 percent. Among the larger states only Telangana and Andhra Pradesh have a higher share. A high share of working age population generally suggests a higher growth potential, simply due to higher availability of labour. And unfortunately, it is precisely when growth potential is high that J&K is seeing slower growth. 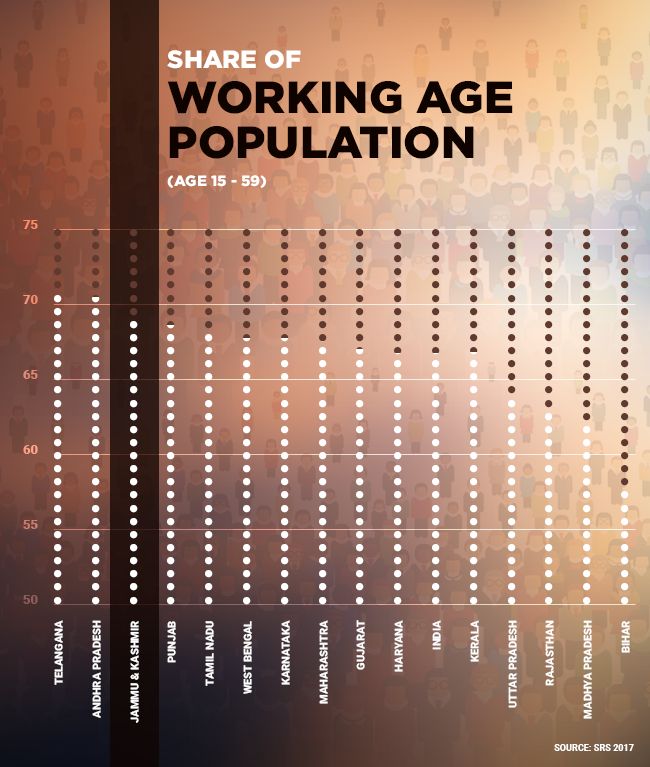 But this favourable demographic backdrop will not last for ever. The flipside of high share of working age population is lower young population. Accordingly, the share of population under the age of 14 in the state of J&K at 21.7 percent is almost 5ppt lower than that for the entire country and is comparable to the southern states like Kerala where populations are aging fast. This is due to falling birth rate in the state. Birth rate in J&K has fallen to just 1.5 percent, broadly the same as in southern states like Kerala or Tamil Nadu. J&K has seen the second highest fall (Uttarakhand has seen the highest fall) in birth rate in the last decade amongst the larger states.
What this means is that in a few years (perhaps a decade or so) the working age population ratio will start to fall. The demographic tailwind will thus start to turn into a headwind. And that will mean either lower growth, even as the state is already poor or more immigration from outside the state which will create social problems of its own.
Ashutosh Datar is the Founder of IndiaDataHub.com, an online platform that brings together all the public data (economic, social, financial) concerning India in an user-friendly analytical app. Before founding IndiaDataHub, he was with IIFL Institutional Equities for over a decade as their Strategist and Economist.
Read Ashutosh Datar's columns here
.
Check out our in-depth Market Coverage, Business News & get real-time Stock Market Updates on CNBC-TV18. Also, Watch our channels CNBC-TV18, CNBC Awaaz and CNBC Bajar Live on-the-go!