No more a hobby of the rich: How online platforms make art accessible to all

No more a hobby of the rich: How online platforms make art accessible to all

Speed, convenience and access to inventory and information made online buying of art so attractive.

Collecting and flaunting great art is a hobby of the rich, and it has always been this way. Or is it? Even if the absolute top-end masterpieces are out of the reach of these people, because they are mostly in museums, there are plenty of upcoming artists, whose works are coveted. But how are offline and online galleries doing in this business? Are they raking in the money? What about the buyers? Whom do they prefer?

Artsy, which is an online art platform, released an Online Art Collector report, which stated that “at Artsy, we’ve seen 58 percent year-over-year growth in the volume of sales on the platform from our 3,000+ gallery and auction house partners.” Meanwhile, offline players like Christie’s, Sotheby’s and Phillips are enhancing their online presence. In this report, Artsy surveyed one million users, across 99 countries, and received 5,807 responses, including 3,993 from art buyers.
What the survey showed was that online buyers continue to remain the same set of people who were buying offline anyway. So there are no 20-something kids who have become billionaires overnight, looking to expand their portfolios. If anything, the buyers have been collecting art for as long as 20 years and now like the price comparison that they can do online and the variety available, all on one platform. Both newbie art shoppers and more experienced buyers like the transparency that websites offer. Also, they are not intimidated by them either, the way they are with auction houses and offline galleries.
This is something Vishal Singhal of Art Zolo, an online art gallery in India, also agrees with. He does have an offline gallery in Jew Town in Cochin, and he told me that he set it up because he had a lot of stock piled up and saw an opportunity to sell them because the Kochi Biennale, which is a popular event, gets a lot of visitors. He should know since he’s from Cochin and will be aware of the tourist scene there too. But he admitted that the offline gallery is purely subsidised by his online one. 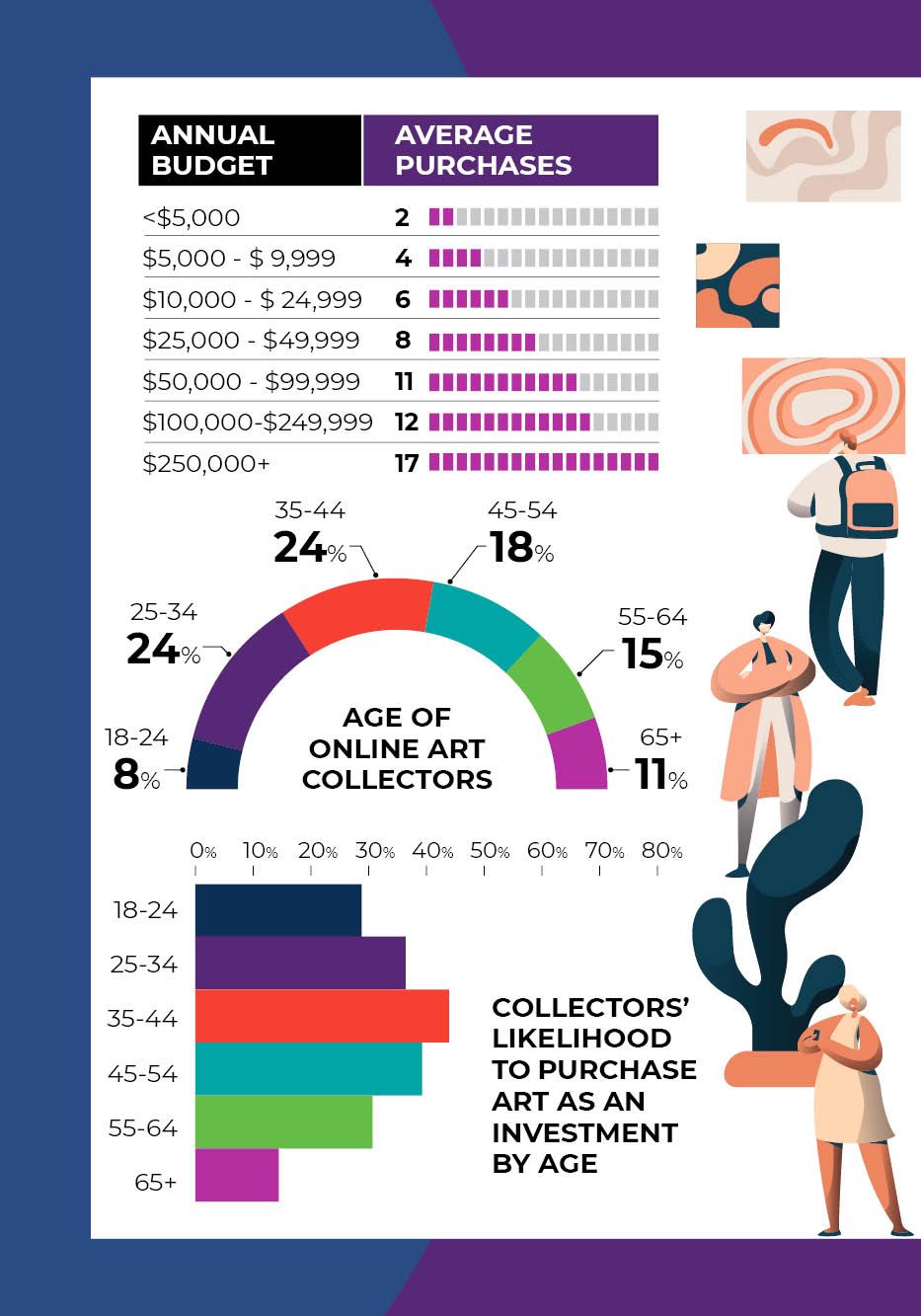 So here is what the Artsy survey came up with:
Not a flash in the pan
Online art sites/galleries are here to stay and they are no flash-in-the-pan operators. Apart from reasons like transparency with regard to prices, convenience, etc, they also provide access to art fairs in other countries which collectors can’t always attend in person. Then there are friction-less transactions, a no-pressure environment and competitive pricing, which all combine to make this a great way to invest in art.
Artsy sales data proves this because “artworks uploaded with their prices publicly available are between 2 and 6 times more likely to sell than similar works with their prices hidden.”
As a younger generation (Gen Z), who do almost all their shopping online, comes of age, online art galleries will appeal to them for all of the above reasons. But, in order to make art affordable, all art galleries also need to pay attention to EMI options, and they are doing so, by allowing people to pay in 4-6 installments.
ArtMoney, a US firm, which provides interest-free financing over 10 months stated in the report that “its partner galleries have seen the average price of artworks purchased by collectors who use the service increase by 2.5 times, as well as a 200 percent increase in the conversion rate for artworks on which Art Money is offered as a payment option.”
So, the myth is busted that buying art is only a rich person’s hobby. It does need a certain amount of disposable income, but anyone with some amount of money to spare can start slowly, pick smartly (as with any investment), and grow rich. Or at least, have an aesthetically beautiful home!
Manali Rohinesh is a freelance writer who explores financial and non-financial subjects that pique her interest.
Check out our in-depth Market Coverage, Business News & get real-time Stock Market Updates on CNBC-TV18. Also, Watch our channels CNBC-TV18, CNBC Awaaz and CNBC Bajar Live on-the-go!