Perched on a hilltop, in the quiet neighbourhood of Orchards in Johannesburg, is The Kraal. This charming residential complex was once home to Mohandas Karamchand Gandhi, or Mahatma Gandhi before he moved back to India to launch his Satyagraha movement against the British regime.

Perched on a hilltop, in the quiet neighbourhood of Orchards in Johannesburg, is The Kraal. This charming residential complex was once home to Mohandas Karamchand Gandhi, or Mahatma Gandhi before he moved back to India to launch his Satyagraha movement against the British regime. I stumbled up the Satyagraha House quite by chance. A meeting with an old friend while on a trip to Johannesburg and a request for offbeat recommendations in the city brought me to this ‘living museum’ dedicated to the memory of the Mahatma. But it is more than a museum; it is a hotel that allows guests to soak in Gandhi’s teachings, experience the space he once inhabited, and eat the food that was central to his philosophy of simplicity and non-violence. Don’t expect to eat the famous South African game cuisine at The Satyagraha House, though. Befitting Gandhi’s philosophy, it serves only vegetarian meals, cooked by a trained Indian chef. 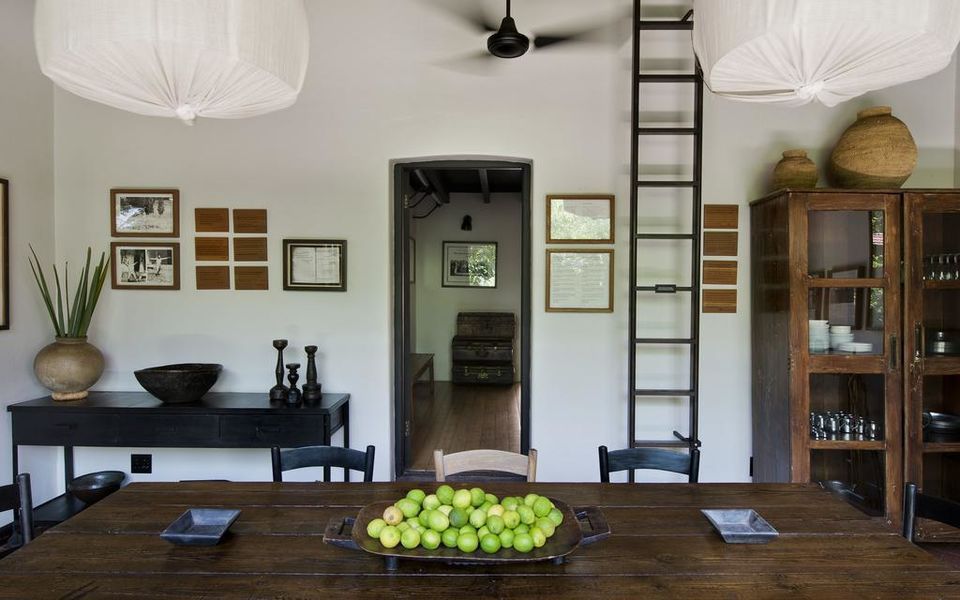 This historic 104-year-old home, modelled around the traditional kraal or circular homes with mud walls of the Nguni tribe in South Africa, was conceived and built by Gandhi’s architect friend Hermann Kallenbach. Jean-François Rial, CEO of the French travel company Voyageurs du Monde, a long-time Gandhi admirer, bought the house when he read it was up for sale in the market. After two years of refurbishment, which involved enlisting the help of a Gandhi historian, a museum curator, and a heritage architect, he opened his passion project in 2011.

He named the laidback

hotel-cum-museum, which beautifully balances austerity and understated luxury in equal measure, as The Satyagraha House. Mahatma’s philosophy of nonviolent protest and passive resistance, known as Satyagraha, was honed in South Africa. Satyagraha House, named after his philosophy, invites guests to celebrate the world leader in minimal, sun-infused interiors. Satyagraha House is more of a living museum to Gandhi and his belief in austere living. But the design is more ‘minimal modern’ than bare and austere.

A walk down a narrow stone pathway edged by a garden meant for meditation, eating meals outdoors, reading or relaxation brings me to the main house with two bedroom rondavels or circular rooms abutting a lounge that leads on to a stoep (a verandah), from which a kitchen flows. The stoep is enclosed with tall wooden concertina doors that have been retained. The elegant home offers three rooms, a mezzanine or a reading room where Gandhi wrote, worked and planned his Satyagraha movement, and a dining space that opens to an organic vegetable garden and a view that encompasses magnificent sunrises and sunsets. 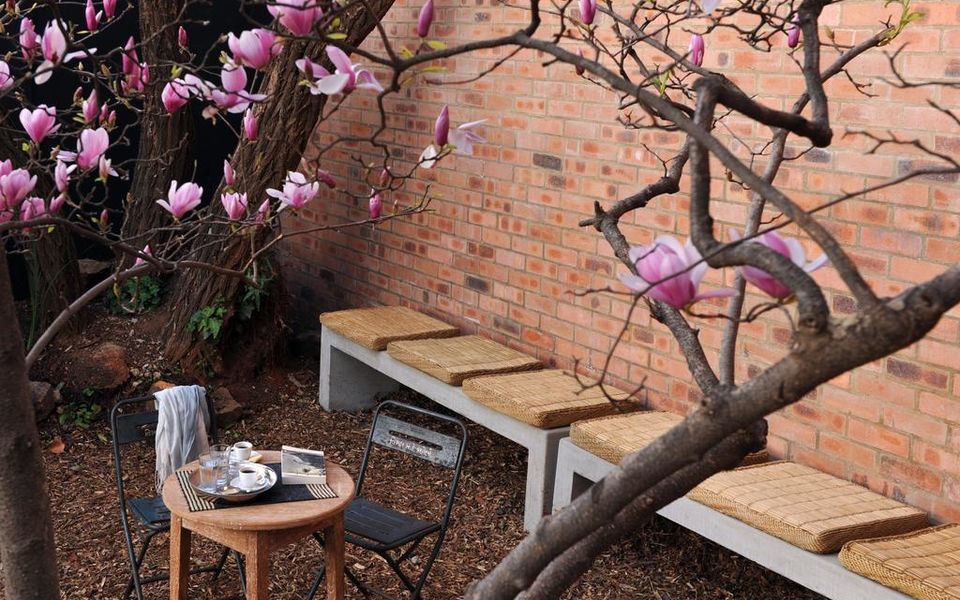 Next to it, as an annex, is the Kallenbch cottage with two rooms. At the southern end of the compound is a new glass and brick extension, conceived by South African architect Rocco Bosman. Period furniture and accessories echo the culture and history of the three countries – India, South Africa and Germany – to which the two close friends trace their roots. The architect and his team of historians and designers have painstakingly restored and preserved the Mahatma’s legacy. Old photographs chronicling his life in South Africa adorn the walls and some of his personal effects – like his teakwood reading desk, a few décor accessories, a white diwan and a four-poster bed – have been retained for their historical value.

Each cottage or room, modern or old, is designed to reflect Gandhian minimalism: worn concrete floors swathed in crisp white linens, teak almirahs, simple desks, wicker charpais and vintage trunks that serve as nightstands. A selection of tomes by or about the Mahatma is helpfully placed at the bedside. 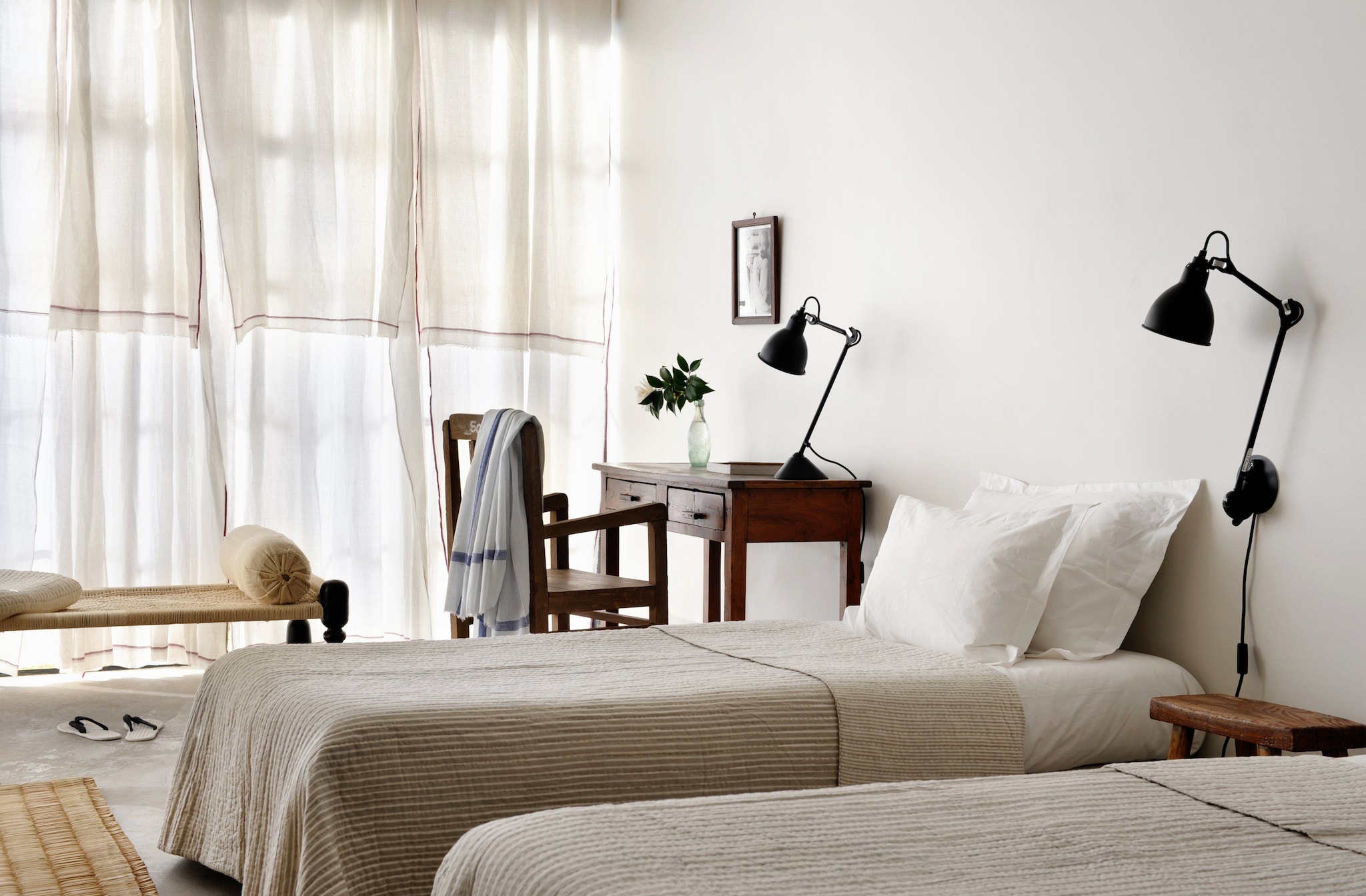 The compound's original thatched-roof farmhouse houses three bedrooms. But the grounds home four modern homes, in the shape of glass cubes, which were built later. Two rondavels or circular rooms, quintessential to South African architecture, house the museum. Its collection -- carefully curated by historian and researcher Lauren Segal -- features Mahatma’s spinning wheel, his reading desk from Gujarat, white curtains screen-printed with his photographs, and his writings that record his transformation from a shy lawyer to a political leader and the voice of an entire generation fighting for freedom. Mahatma Gandhi left South Africa in 1914, never to return.

Immersed in the simplicity he preached, the Satyagraha House is more a contemporary museum than just another hotel.

Deepali Nandwani is a journalist who keeps a close watch on the world of luxury.
Read her columns here.
Tags
next story