Updated : January 14, 2020 06:34 PM IST
The decade ending 2019 was characterised by relatively tepid corporate earnings, which impacted equity returns.
The Nifty’s returns in 2019, at 12 percent, was way below that of benchmark equity indices of the US, Japan, Brazil and Russia.

Stock markets are often seen as a barometer of the economy. Even as economic growth plunged to new lows, benchmark indices continued to scale new peaks with foreign institutional investors (FIIs) pumping $14.2 billion into the Indian equity markets in 2019, the highest in five years. Though the performance of the stock markets looks impressive, they are no match compared to global peers.

The Nifty’s returns in 2019, at 12 percent, was way below that of benchmark equity indices of the US, Japan, Brazil and Russia. In fact, it did only better than South Korea and Indonesia in local currency terms among major stock markets during the year. Emerging markets (EMs) outperformed India by a wide margin during 2019. Over the last 12 months, MSCI EM gained 15 percent outperforming MSCI India index that advanced 8 percent.

The story gets less rosy if long-term performance is taken into account. While India improved its rank in terms of global market capitalisation from 17th to 8th over 2004-2010, backed by an impressive average GDP (gross domestic product) growth of 8.8 percent during the timeframe, in the decade (2009-19) that just ended, the country improved its global market cap ranking by just one notch from 10th position in 2009 to 9th in 2019. It had taken the 9th position during the market rout that followed the global financial crisis in 2009 but improved to 8th position after the sharp rebound in 2010. Though it climbed up to the 7th position in 2018, it had slipped to 9th in 2019.

In fact, Nifty’s compounded annual growth rate (CAGR) of 8.9 percent in local currency terms during the last decade was no better than the gains made by gold. The CAGR of bank fixed deposits (FDs) and 10-year government securities (G-Sec) stood at 7.7 percent between 2009 and 2019. The CAGR of Nifty increased at a slower pace than the nominal GDP growth rate of 13 percent in the last ten years.

India’s market capitalisation also advanced by a mere 3 percent year-on-year to $2.1 trillion in 2019, the lowest pace among major and emerging markets. “Consequently, market cap-to-GDP is below long-term average,” Saurabh Patwa and Sankalp Baid, analysts at HDFC Mutual Fund (MF) said. India’s share in world market cap is now at 2.5 percent, in line with its historical average. 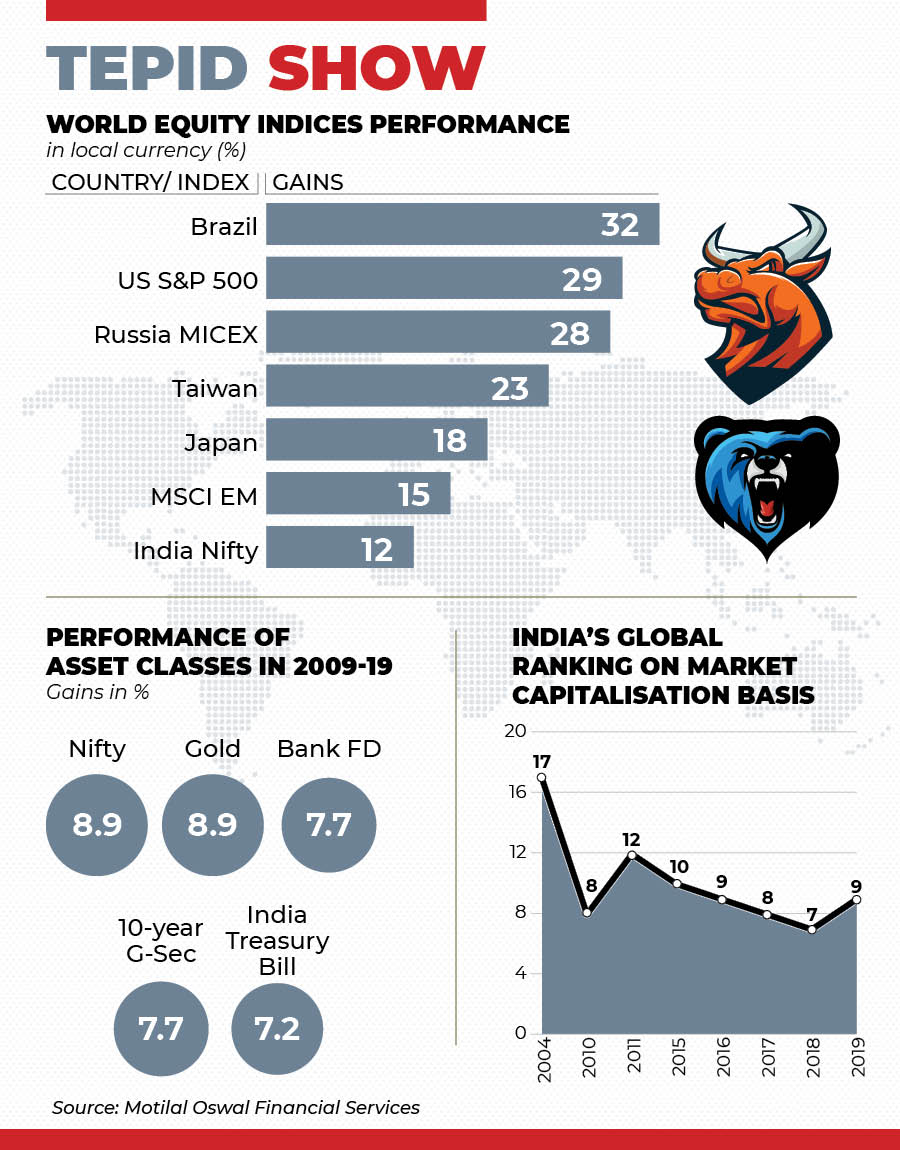 The decade ending 2019 was characterised by relatively tepid corporate earnings, which impacted equity returns, market observers said. “For several years now, strong growth in profits has been elusive,” they said. The slowdown in the profit growth of companies on the Nifty index was led almost entirely by the fall in profits of corporate banks. The share of corporate banks in the consolidated profits of Nifty companies fell from 12 percent to 3 percent between 2012-13 and 2018-19.

However, banking asset quality issues came to the fore in 2015-16 with the Reserve Bank of India mandating asset quality review of banks and subsequently recognition, provision and resolution of NPAs. This had taken a toll on corporate earnings with Nifty’s EPS CAGR projected to advance by a meagre 5.6 percent between 2014-15 and 2019-20.

Over the last 10 years, Reliance Industries, HDFC Bank, HDFC, ICICI Bank, Infosys, ITC and L&T have maintained their position in the top-10 by weightage terms in the Nifty. Maruti, Axis Bank and Sun Pharma have been part of the index for the past ten years but featured in the top 10 just once over this timeframe. SBI and Tata Motors have been in the top-10 for five out of ten years. ONGC, HUL and Bharti Airtel have appeared twice in the top 10.