Updated : January 17, 2020 12:21 PM IST
These funds have beaten most equity MFs and their fixed income peers by a good margin.
Industry experts advise caution on investing in these funds as the rally in bond prices is unlikely to sustain in 2020.

Debt mutual funds (MFs) may have found themselves in a tight spot due to defaults and delayed payments of securities owned by troubled entities such as IL&FS and DHFL. But long-duration debt and gilt funds have been among the best performers in the last one year following the sharp rally in bond prices.

Long duration debt funds topped the performance chart in the fixed income category delivering 12.1 percent returns on average in the last one year. Gilt funds, which invest primarily in government securities (G-Secs), came a close second. While gilt funds that invest in securities with a 10-year duration gained about 12 percent, gilt funds with exposure to shorter duration instruments increased by 10.4 percent during the one-year timeframe. These funds have beaten most equity MFs and their fixed income peers by a good margin.

The fall in yields has pushed up bond prices benefiting these funds. The benchmark 10-year government bond yield has dropped to around 6.5 percent, 100 basis points (1 percent) lower than a year ago and the lowest since 2017. Bond yields and bond prices are inversely related. Rising bond prices help these funds earn higher returns, which typically gain the most when yields or interest rates start falling.

“These (long duration) funds clocked double-digit returns as (bond) yields came off,” said Lakshmi Iyer, chief investment officer (CIO) (debt) and head, products, Kotak Mahindra MF. As a result, long-term bond funds emerged as the best performers in the fixed income category in 2019. With the yield on the benchmark 10-year bond falling from around 8 percent to 6.5 percent since 2018, bond prices started to rally. 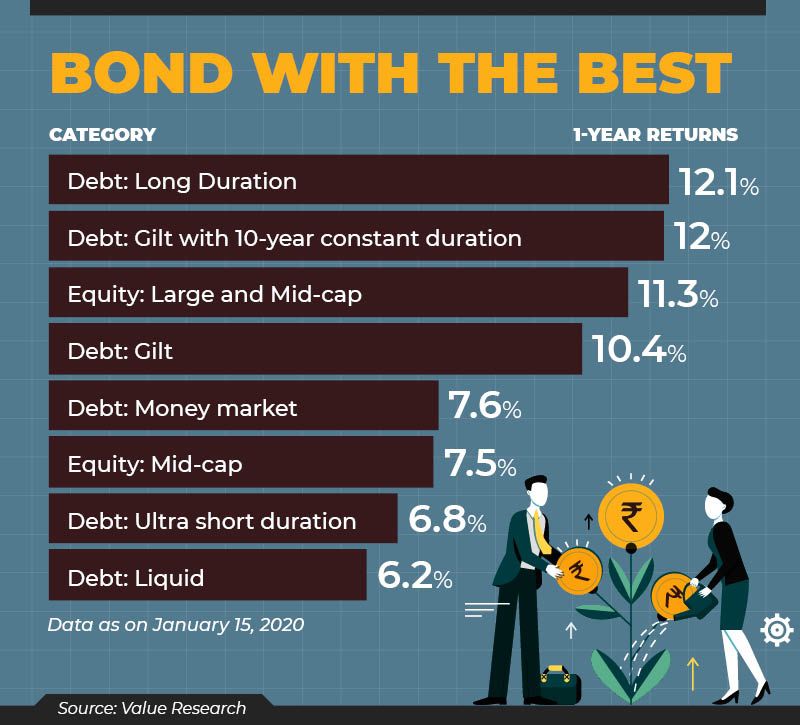 “These are cyclical funds and tend to do well when interest rates go down and vice versa,” said Maneesh Dangi, co-CIO, Aditya Birla Sun Life MF. Long duration debt and gilt funds have high exposure to G-Secs. The top-ranked fund has gained nearly 13.1 percent in the past one year, which is among the best in widely traded assets.

These funds, however, are highly susceptible to interest rate risks. They have in fact given negative returns in years when interest rates rose sharply. Industry officials and experts also advise caution on investing in these funds as the rally in bond prices is unlikely to sustain in 2020.

“The yield on long-term bonds may not come down significantly in 2020. So, it would be difficult for these funds to repeat the performance (of 2019),” Iyer said. “The yield on the 10-year government bond is already low. The chances of it going down further is quite less,” a senior industry official said.

Gilt funds, which delivered double-digit returns in crisis-ridden 2008 when the RBI cut rates during the end of the year, moved into the negative zone after interest rates started rising in the following year.

Similarly, they delivered double-digit returns in 2001 and 2002 as well when interest rates fell. Given the risks, some experts believe that investors are better off if they invest in dynamically managed bond funds.
Tags debt mutual funds Gilt Funds Long duration debt funds RBI repo rate Views