The September consumer price inflation is suddenly bringing home the realisation that the government and the Reserve Bank of India don’t really have too many options available for stimulating growth.

The September consumer price inflation is suddenly bringing home the realisation that the government and the Reserve Bank of India don’t really have too many options available for stimulating growth. At 3.99 percent, CPI is exactly at the level the MPC is mandated to keep the CPI. Ideally, therefore, it should not have space to cut more.

As well, the CPI trajectory is already running 20 basis points above the RBI’s forecast for the month of September. For the July-Sept quarter, the RBI forecast 3.4 percent, the number has come in at 3.5 percent. Food inflation in the wholesale market is already standing at 7.47 percent in September. Now the CPI food inflation which was moving between -2.5 percent and +2.5 percent for the past year, has crossed 5.1 percent in September.
There are other things about food inflation that are not at all looking good: Rural inflation that was subdued at under-1 percent this far has moved up to over 3 percent in September. Urban inflation has been above 5 percent for a quarter now.
The food inflation appears to have been triggered by the high price of onions and poor transportation during the rains. But it has spread to all veggies; also pulses and cereal shave inched higher while milk prices in rural areas that were subdued have started rising. 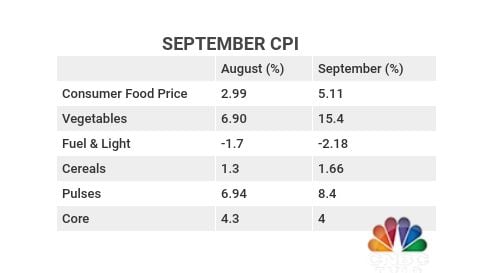 Nor is food CPI going to stop here. We enter a period of low base starting November. Just look at the collapse of the food CPI in November 2018. (A source told me this was partly because until then the data was collected by the post offices but around this time last year the NSSO started collecting data independently, noting discrepancies in the post office-collected data.)
Be that as it may, it does appear that a seasonal fall in food prices during the winter months notwithstanding, India’s food CPI is sure to track above 5 percent for the next two quarters at least.
FOOD CPI
Not that this is connected, but pork inflation in China is at 69 percent taking that country’s CPI to a 6-year high of 3 percent. Globally, food inflation is however still benign with a sharp rise in edible oil prices getting countered by soft sugar prices. Short point, the MPC will have to note that the global backdrop for food prices is also not one of deep disinflation.
Coming back to India, given the current pace of food inflation and the base effect, India’s CPI is likely to by a smidge over 4 percent on an average over the next 12 months. Then, can the MPC argue its way for big cuts? One more 15-25 basis points cut may be possible, but once the repo rate hits 4.9 percent, the MPC members may well baulk at more rate cuts, if inflation remains around 4%.  For the bond investor then, even the next rate cut of 25 bps is not an attractive to buy bonds, as he is staring at no further stimulus for his bond holding. At 6.4 percent, the 10-year bond yield has probably bottomed.
Now let’s go beyond rate cuts to other instruments to stimulate growth. The RBI has kept liquidity surplus by Rs 1-2 lakh crore since June. But it appears this money is not being lent since credit offtake has fallen to 8.8 percent as of end September from 12.5 percent same time last year.
Finally, fiscal deficit is also looking almost certain to hit 3.5-3.7 percent given the steep fall in tax collections. Of course, aggressive divestments will help, as will the generous RBI dividend. Higher deficit and higher RBI dividend are fundamentally inflationary. All told, the era of basking in the comfort of low inflation and hence the huge space to stimulate growth through monetary steps is over. Rates have bottomed. Almost.
Check out our in-depth Market Coverage, Business News & get real-time Stock Market Updates on CNBC-TV18. Also, Watch our channels CNBC-TV18, CNBC Awaaz and CNBC Bajar Live on-the-go!