Updated : August 17, 2019 05:05 PM IST
In the present day where everything is automated, Khadi, the ultimate cotton fabric, may be considered a luxury.
Khadi is a draw because of the lure of hand-made excellence, and the repercussions of Gandhiji’s ideas continue to be felt in America.

In New York City, you are bound to come across Mahatma Gandhi in the most unexpected places, be it his statue in Union Square Park or art in one of the countless art galleries and museums. The Mahatma’s role in inspiring Martin Luther King Jr and a whole generation of peace activists is a given – yet who would have thought the Father of the Nation would also inspire a fashion movement?

The Khadi that the Mahatma wove on his charka is the inspiration behind the collection of the iconic Japanese avant-garde designer Issey Miyake. So it is appropriate that in the month of India’s independence, the noted design house has launched ‘Khadi: Indian Craftsmanship’, an exhibition at its sleek Tribeca store which will run through August 22. It shows clearly that old and new, the traditional and the avant-garde can meet in designs that are forward thinking but hark back to the past. Indian soft diplomacy has certainly spread to unusual places. Walking down this trendy area of Tribeca in Manhattan, one is startled to see the Khadi Exhibition through the large glass windows of the Issey Miyake store and Americans have been walking around this elegant white space draped in rolls and rolls of Khadi cloth, and mannequins in Khadi outfits, with an actual charka laid out and Indian ragas, chants as well as Bollywood music wafting through the store.

You can see videos which tell the story of the evolution of Khadi, and show the inspiring work of Martand Singh who revived traditional Indian fabrics. He was the director of the Calico Museum founded by the Sarabhai family and since the 1980s Issey Miyake had collaborated with Martand Singh who worked to promote Indian textiles.

As the publication Surface noted: “As one of the pioneers of Japanese avant-garde fashion, Issey Miyake is celebrated for creating clothes with greater resonance. The way he exaggerated proportions and played with fabrics showed how the sartorial can be an art form. It is that latter part of this equation that is the focus of ‘Khadi: Indian Craftsmanship,’ where the impact of simplicity takes center stage.”

Makiko Minagawa, who was earlier the textile director of the Miyake Design Studio, had worked with Martand Singh, known as Mapu, and Asha Sarabhai in creating a natural and simple line called ASHA. Minagawam is now the creative director of HaaT, a line produced by Issey Miyake. She was greatly influenced by Martand Singh and is the spirit behind the Khadi exhibit which is a tribute to his work. Khadi has been called the ‘fabric of freedom’ since it was Gandhi’s answer to the British monarchy in promoting self-reliance. At the opening of the exhibition in August, Makiko Minagawa shared her thoughts: “I was always fascinated by Mapu who spoke about India with passion: its life, customs, fabric, and traditions. I was very fortunate to have met someone sophisticated like Mapu who had a clear philosophy and talked about it with such a passion and charisma. Mapu imparted the values of Indian culture to me, and at the same time encouraged me to look at the techniques that have long been forgotten in Japan. It was truly a gift from him in that he inspired me to rediscover the making in Japan.”

She added, “In the present day where everything is automated, Khadi — the ultimate cotton fabric may be considered a luxury. Nevertheless, we hope that with this exhibition you can rediscover this simple and deliberate craft, and appreciate it as something that complements your lifestyle.”

Indeed, intrigued by the dramatic rolls of white Khadi cascading around the mannequins dressed in white as seen from the store’s large windows, Americans have been coming in to check out this unusual exhibit as well as the HaaT collection by Minagawam which brings India to American fashionistas who know little about Khadi or the many crafts of India. 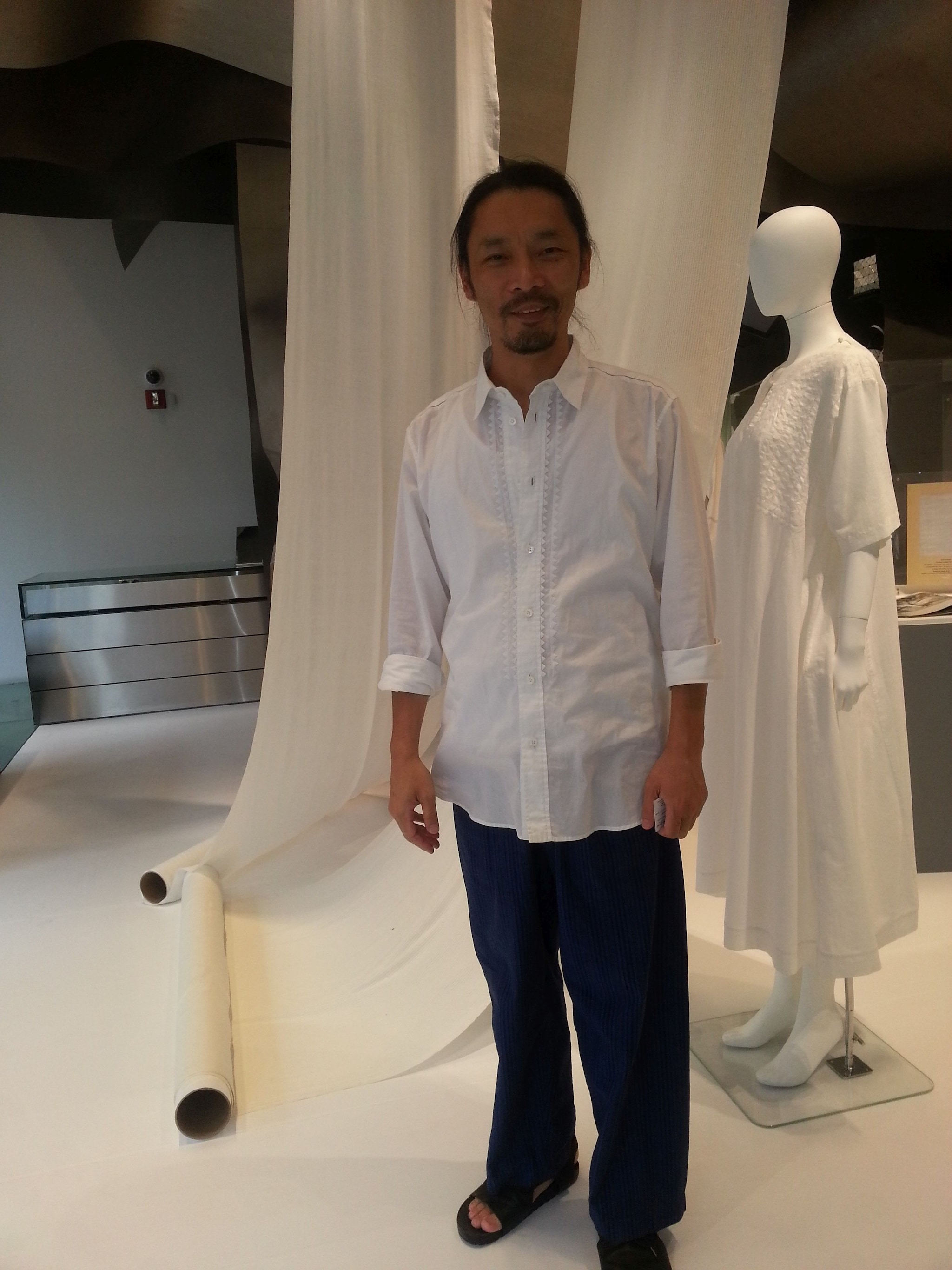 Masa Watanabe is the Director of Retail at the Issey Miyake New York store and he first saw the collection and the exhibit in Tokyo and wanted to bring them to New York for the American consumer. He said the response has been very good and the pieces, which are all made in India, are selling well. There is also ‘Tamasha’ – a line of Indian crafted handbags. He pointed out the many Indian crafts employed by Minagawam in the collection – mirror work, Kabira and jaali work to mention a few. He said, “I wanted Americans to see it and feel it and experience the human craftsmanship.”

Khadi is a draw because of the lure of hand-made excellence, and the repercussions of Gandhiji’s ideas continue to be felt in America. According to Consul General Sandeep Chakravorty, the Indian consulate is participating in the upcoming New York Textile Month, showcasing Indian fabrics including Khadi.

Sagarika Sundaram is a New York-based textile designer and artist who is on the Indian consulate team’s initiative to highlight Indian fabrics and crafts at the international event. Sundaram, who is doing her Masters in Fine Arts at the Parsons Institute of Design, says: “India is, of course, a big part of the textile story and you can’t talk about textiles without talking about India.”

While praising the work of Martand Singh as a genius who went around the country working with weavers and cataloguing and documenting textiles, she feels we tend to take our handlooms for granted since we see them in daily life worn by ordinary people.

“What we don’t realise is that handloom textiles are our strength and nowhere in the world do we have this unbroken lineage of handloom textiles,” she says. “It is almost like jewelry made by hand, and each strand and yarn is hand-crafted. You could say the loom was the first computer!  It’s an amazing heritage and it’s amazing that it’s still alive. What’s special to me is that Gandhi got a whole nation to spin yarn and to use textile as a political statement – and that message is even more relevant today.”