Current account deficit is shrinking but that’s not good news

Updated : December 03, 2019 02:01 PM IST
In the first 7 months of this year imports have declined by 7 percent YoY but in the last three months imports have declined by almost 15 percent YoY.
In FY19 India’s CAD was $57 billion or 2.1 percent of GDP; the current trajectory suggests CAD will shrink to half of that or just over 1 percent of GDP this year.

Current account deficits (CAD) have always been a bugbear for the Indian economy. They have increased our dependence on global capital flows and thus made the economy vulnerable to swings in global risk sentiment. This is likely to change for the next few quarters as India enjoys the lowest external account balance in over a decade. While this is positive, this is only a cyclical change, not a structural one. And one that reflects the sharp domestic slowdown. The moment domestic growth starts to recover, so will imports, and so will the CAD. Rather than a sign of strength, it is a sign of our current weakness (in growth). 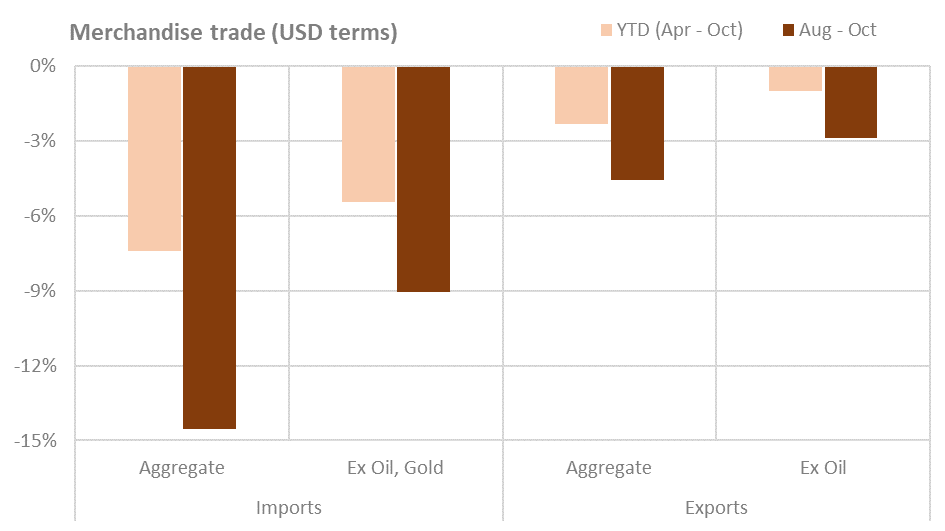 India’s imports (merchandise) are shrinking with the pace of decline having accelerated in the last few months. In the first 7 months of this year imports have declined by 7 percent YoY (USD terms) but in the last three months imports have declined by almost 15 percent YoY. Part of the reason is lower oil imports because oil prices themselves are double digits on a YoY basis as also lower gold imports. But even excluding these two (volatile) commodities, imports have declined 5 percent in the first 7 months of this year and 9 percent in the last three months. The point is that the pace of decline in imports has accelerated even if we exclude the volatile items.

On the flip side, exports are performing much better in a relative sense. Exports, while declining, are falling at a much slower pace than imports. They have declined 2 percent in the first 7 months of the year with the pace of decline accelerating to 5 percent in the past 3 months. And if we exclude petroleum products, which are impacted due to the fall in oil prices, exports are down just 1 percent YTD and 3 percent over the past 3 months. Consequently, India’s (merchandise) trade deficit is falling sharply. In the first 7 months of this year, the trade deficit has fallen 13 percent on a YoY basis with the pace of decline accelerating to 25 percent in the past three months. Indeed, trade deficit in the last few months is lower than even the level 2 years back. And the services trade balance remains broadly stable. In the first quarter of this financial year, services surplus increased 7 percent YoY and the provisional data suggests net exports have declined 2 percent YoY.

Putting it all together what this means is that India’s current account deficit will dramatically shrink this year. In FY19 India’s CAD was $57 billion or 2.1 percent of GDP. The current trajectory suggests CAD will shrink to half of that or just over 1 percent of GDP this year. More importantly, the current trajectory suggests that India will have a current account surplus over the next 3-4 quarters on average (adjusted for seasonality). This is significant change because the last time India had a current account surplus was 15 years ago in 2004.

Growth slowdown may be getting worse

India does not import goods for exports like other Asian countries which are part of the global supply chains. Now India’s imports are by and large unlinked to exports. The two exceptions being oil and gems and jewellery. A part of imported oil is processed and exported back as petroleum products and rough stones are exported back after processing. So, barring these two categories, in for meeting domestic demand (and in some cases additionally for exports). The decline in non-oil, non-precious metals imports thus reflects the state of the domestic economy and will reverse when the economy changes growth trajectory. The improvement in the external account is thus cyclical rather than structural. And this is an additional confirmation of the slowdown currently underway in the economy. Worryingly, the acceleration in imports suggests that growth slowdown may be getting worse.

A negligible CAD or a surplus also means that unless capital flows turn negative, the rupee should appreciate against other currencies. This will perversely make imports more competitive relative to domestic producers. (As an aside, the exchange rate is a wonderful market-determined mechanism of restoring balance between domestic and overseas producers.) It is unlikely that the policymakers would want this and thus the RBI will most likely intervene and mop up excess capital flows to modulate the upward bias in the rupee. Already in the month of September, the RBI has intervened and bought $5 billion to prevent appreciation of the rupee. The rupee has generally outperformed EM currencies in the last few years and this will likely continue in the next few months as well.

Ashutosh Datar is the Founder of IndiaDataHub.com, an online platform that brings together all the public data (economic, social, financial) concerning India in a user-friendly analytical app. Before founding IndiaDataHub, he was with IIFL Institutional Equities for over a decade as their Strategist and Economist.