From team leaders to volunteers, Indian-American faces in all the right places in 2020

Updated : February 15, 2020 03:11 PM IST
Almost every presidential candidate seems to have a sprinkling of Indian-American talent and expertise behind its campaign.
Younger Indians seem to have a passion for making a difference and are in many nonprofit and civic groups.

Sabrina Singh, a second-generation Indian-American, has just been appointed National Spokesperson for Mayor Mike Bloomberg’s presidential campaign. Stated the Bloomberg campaign, “We are thrilled to have Sabrina on board — she's a veteran of multiple races who will add to our talented team as we continue to grow in the run-up to Super Tuesday.”

Indian-Americans have certainly come a long way from the old days of first-generation voters and struggling new immigrants who had had not much political say. Back in the 1990s, involvement in the political scene for Indian immigrants simply meant photo ops, posing with senators and congressmen, and if very lucky, with an actual president. There were hardly a handful of Indian names which were recognisable in the political world, and certainly not too many who had the clout Indian-Americans have today. Their children dipped their feet in the political process by getting an American education and often serving as interns to the legislators in Washington. Now in the 2020s, we are certainly seeing more action. It’s a groundswell with Indian-Americans in the corridors of power, in think-tanks, political campaigns, in community organisations and often as commentators on national television. Four Indian-Americans are in prime Congressional seats – Rep. Ro Khanna, D-Calif., Rep. Ami Bera, D-Calif., Rep. Raja Krishnamoorthi, D-Ill., and Rep. Pramila Jayapal, D-Wash. Kamala Harris is the high profile Senator from California and there are scores of Indian-Americans in public life, from State Senates to courts to school boards.

Indian-Americans are visible on the Senate floor, in TV interviews and as political pundits. You often see former US Attorney Preet Bharara or the former Solicitor General Neal Katyal sharing their sharp expertise and experience and there’s Asha Rangappa, a former FBI agent and lawyer, sharing her insights on current political events on CNN. Neera Tanden, a former Hilary Clinton advisor, is sought after for her opinions. Watch political upheavals in DC on television, and you are sure to see Manu Raju, senior congressional correspondent at CNN, covering Capitol Hill and campaign politics.

Indian-Americans who have been very visible in the whole impeachment proceedings are Senator Kamala Harris and Congresswoman Pramila Jayapal. District, sits on the House Budget, Armed Services, and Oversight and Reform committees and is the first vice-chair of the Congressional Progressive Caucus. He also serves as an Assistant Whip for the Democratic Caucus. The ranks of Indians in the legislative continue to swell with the recent wins by two Indian-American candidates, Suhas Subramanyam and Ghazala Hashmi, whose senatorial victories helped the swing state of Virginia to go completely blue. It made Subramanyam the first Indian-American in the state house of Virginia and Hashmi the first Muslim woman to be a state senator.

Younger Indians seem to have a passion for making a difference and are in so many nonprofit and civic groups that you can barely look at a human rights or women’s group without seeing some Indian names on the masthead. These are the invisible working grounds where they get the experience to work on civic and political matters.

With the Indian population continuing to grow and showing its importance beyond its numbers in the field of medicine, technology, business and academia, it is no surprise that all the presidential candidates are wooing this demographic. Many candidates have realised the importance of having a diverse working staff to represent the voters, and reach out to Asians, including Indians. Senator Warren’s team has over 100 Asians on her staff, including Indians ranging from major positions to those at the grassroots level.

Gautam Raghavan, who was previously Associate Director of Public Engagement under President Barack Obama is now the Chief of Staff to Rep Pramila Jayapal. Earlier in the month, Jayapal gave her endorsement to Sanders and will serve as the National Health Policy Chair and Washington State Chair of Bernie 2020. Jayapal joins Rep. Ro Khanna on the Sanders campaign for president. “I am grateful to Senator Booker for building one of the most diverse teams in American history,” says Rishi Bharwani. “Politics is traditionally run by an ‘old boys club’, something I understand to be code for ‘old white men’ – but increasingly people of colour, and especially Indian-Americans, are changing the system from the inside. In the last few years, we’ve significantly grown the number of Indian-Americans in Congress, seen Indian-Americans hold senior roles on presidential campaigns, and even seen the first Indian-American run for president in Kamala Harris.”

Indeed, the momentum of Indian-Americans joining the public sphere continues: Vice President Joe Biden has two Indians in prominent positions on his staff: Amit Jani who is National Asian American Pacific Islander Director at Biden for President, and Maju Varghese who is the COO and Senior Advisor to the Biden campaign. Jani is organising a series of Joe Biden Chai and Chat series in New Jersey for the Indian community.

Even the Chairman of the AAPI Victory Fund, a super PAC focused on mobilising Asian American and Pacific Islander voters happens to be an Indian-American, Shekar Narasimhan. When the Fund endorsed Biden for the presidential race, he said, “We believe that Joe Biden is the best candidate to defeat Trump and lead our country. Out of all the presidential candidates, he has the most experience and cares deeply about AAPI issues.”

Almost every presidential candidate seems to have a sprinkling of Indian-American talent and expertise behind its campaign. Mayor Pete Buttigieg’s policy director is Sonal Shah, his deputy campaign manager for brand and media is Hari Sevugan, and his national Investment Chair is Swati Mylavarapu. 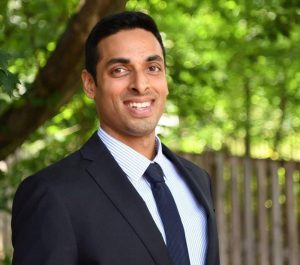 The deputy national press secretary of Senator Elizabeth Warren’s campaign is Saloni Sharma and the research director is Vriti Jain. Warren has many Indians as well as Asians on her staff and in the ground movement. Over 150-plus prominent Asian American and Asian Pacific Leaders, including Indians, announced a major endorsement for Elizabeth Warren for President. One of the issues they mentioned was immigration: “She has a comprehensive plan that includes reinstating and expanding DACA, lowering barriers to naturalisation, and not just reversing Trump’s refugee cuts, but committing to increase refugee admissions.”

Indeed, Indians being part of the Asian demographic, also makes it attractive to the candidates. According to an NBC report, both the Democratic and Republican parties have tried to win over Asian American and Pacific Islander voters, who accounted for just over 4 percent of the electorate in the last presidential election.

It’s a voting bloc that’s part of the fastest-growing racial group and is expected to double by 2040. It’s also one that’s potentially up for grabs, with nearly two in five Asian-American registered voters not identifying as either a Democrat or Republican, according to the 2018 Asian American Voter Survey, conducted by a number of nonprofits.

Judging by the past, present and the possibilities for the future, Indian-American political clout is only destined to grow, perhaps all the way to the White House one day.