Indian cuisine is known all over the world. It’s the different regions that need to be showcased more, says feisty chef Roshni Gurnani who loves to proclaim her Indian roots.

In the early days of Indian immigration to America, you would have thought you were seeing a food mirage: Sindhi Sanna Pakoras being served at that elite bastion of American classic cuisine -- the prestigious James Beard House which is like the official culinary seal of approval on American food.

But here was the feisty chef Roshni Gurnani who loves to proclaim her Indian roots, showcasing a full desi dinner with many Sindhi touches. On the table she had Sindhi Papadam, Pickles, and Manis (rotis) – something Sindhis cannot do without -- and the largely mainstream diners, mostly food connoisseurs, were happily munching away. As she says, “Indian cuisine is known all over the world. It’s the different regions that need to be showcased more.” 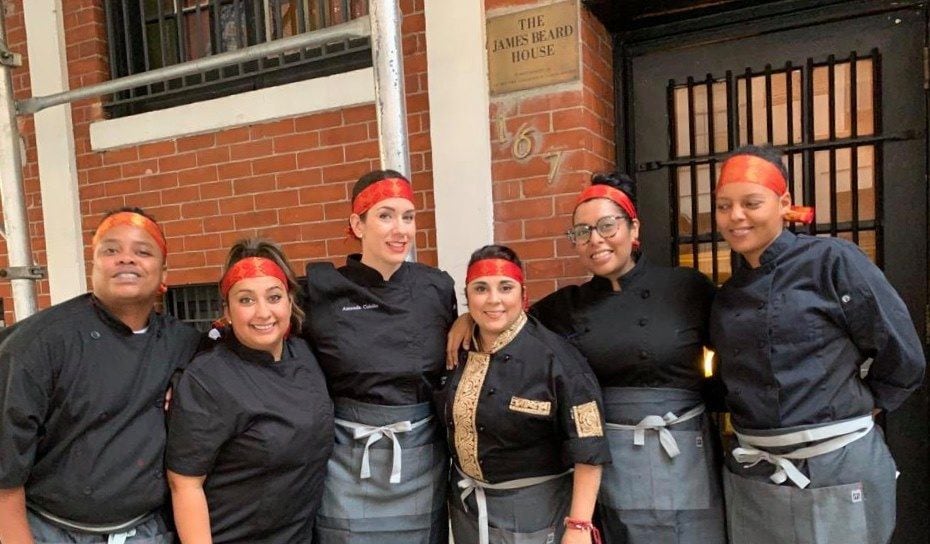 Chef Roshni Gurnani with Divya Budhrani Carichael, Evelyn Gahcia and Danica Whiting.
So who is Roshni Gurnani and why is she such an evangelist for Sindhi cuisine?  Popularly known as Chef Rosh, she herself is a second-generation Indian-American and came to Sindhi food by the feasts cooked up by her mother and her grandmothers from childhood.
Chef Rosh is a familiar face on American food shows on television. She appears frequently on Food Network’s show ‘Chopped’ in which she was awarded the title of ‘Chopped Champion’; she’s also been a contestant on Hell’s Kitchen with Michelin Star Chef Gordon Ramsay as well as on ‘Beat Bobby Flay.’ Nawabi Quail Photo Credit-James Beard Foundation
She’s won a gaggle of awards including the Best Taste Award for the Wine and Dine Festival as well as first place in the Taste of British Virgin Islands. She’s been a celebrity chef with chefs Mario Batali and Todd English at the Sun Fest Wine Festival, and was awarded the 2016 Top Chef Las Vegas at the Las Vegas Food Festival.
Gurnani, who grew up in Canada, went to the Culinary Institute of Canada. She has always recognised the value of healthy cuisine and as a chef in Boston she introduced healthy restaurant-style food into college campuses which was a popular move. Always innovative in her food ideas, she has been chef at hotels including Park Hyatt Resort and Spa in Goa, Hotel Derek in Texas and Thistle Marble Arch Hotel in London. 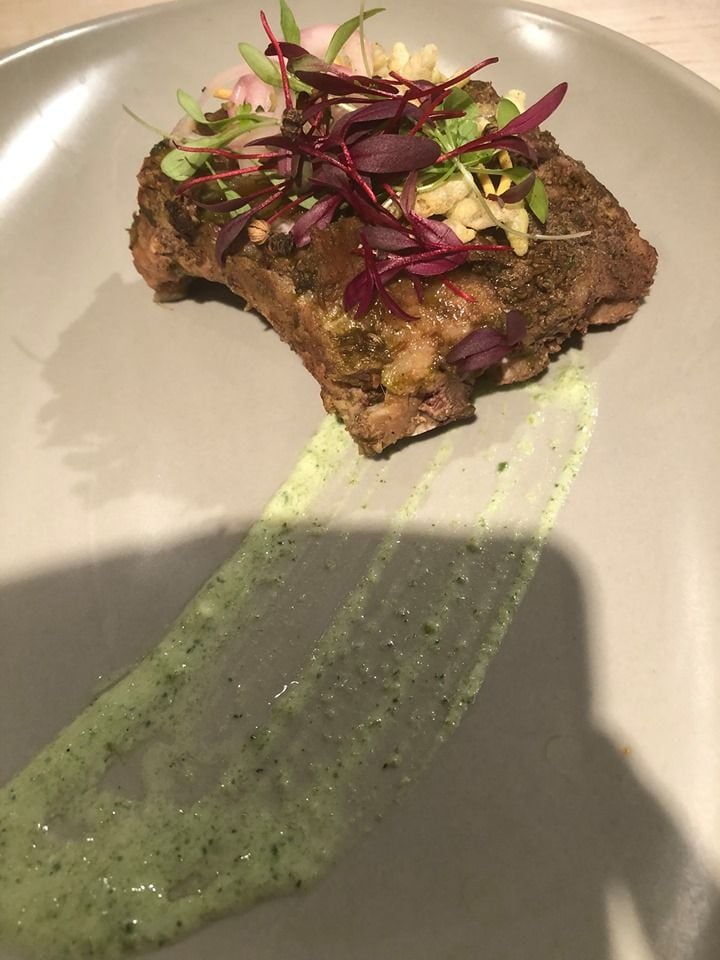 Elaichi- Dalchini Pork Ribs Photo Credit-James Beard Foundation
Ask her about her childhood memories, and she says, “
I grew up in a traditional Sindhi household and that has made a huge influence on how I cook and create menus.” A highlight of her career has been the
seven-course vegetarian Sindhi meal she made at the James Beard House, putting the well-loved but little-known cuisine of her childhood on the food map nationally.
Her mentor and inspiration was her late mother Shireen, and the vegetarian meal was in her honour, with such authentic dishes as seyal mani, seyal bhee and Sindhi macaroni. So now two years later Gurnani was back at James Beard but this time showcasing a different face of Sindhi cuisine which is more than just vegetarian food.  There is a very strong non-vegetarian component with rare dishes which are not found in any other food culture but she has brought her own interpretation to them: "I wanted to showcase food I grew up with but in a way that has never been down before.”
While chicken, goat meat and fish are commonly used in Sindhi food, Gurnani’s menu included  Jinga Daag Mein - Sautéed Shrimp with Rich Onion Gravy, Elaichi–Dalchini Ribs  - Cardamom and Cinnamon–Infused Pork Ribs with Cilantro Gastrique;  and Nawabi Bitare Biryani - Slow-Cooked Basmati Rice with Quail, Saffron, and Aromatics; and Raita Gelato.
These are dishes you wouldn’t find in an authentic Diwali menu back in India, but as Gurnani explains: “I took traditional flavors and infused them with not so traditional items you would normally not see on a Diwali menu to showcase the best of both.” Chef Roshni's fusion menu.
In fact as she points out pork ribs and quail are not used commonly and she was making Quail Biryani for the first time!
As she told diners, “Quail is not traditional, pork is not traditional – but why not! The spices were traditional, the cooking method was traditional. It was a different type of meat than usual but the spices were traditional.”
While her own Diwali memories are of fireworks, prayers, vegetarian meals and sweets, she wanted to showcase the  non-vegetarian Sindhi cuisine for the diners at James Beard.
As a modern day Sindhi chef, she is always looking to make the dishes more accessible and innovative for all eaters. Indeed, she has the essential DNA of old-time Sindhi wanderers who absorbed and adopted bits and pieces of foreign cultures and made them their own.
Gurnani ended the meal with a traditional Sindhi dessert – sweet malpuras which were created by her co-chef Divya Budhrani Carmichael, who has SugarDady Desserts in Houston. This sweet was recreated as bite-sized discs of fried dough topped with flavored sugars.
Asked if fusion is the way to go in Indian food, Gurnani says, “I think a lot of times people misinterpret the word ‘fusion’ and think of it as blending two cultures through cuisine. It is, in fact, the right blend of different flavours with the right concept. Indian food is special in its own way and making it slightly elevated and elegant is what I enjoy doing.”
She feels she is influenced 80 percent by tradition and 20 percent by innovation, giving her own twist to old well-loved dishes.
Gurnani travels all over the country with her own catering and consulting company and believes that “food is a journey, not a destination.” Malpuras. Photo Credit-James Beard Foundation
She is currently cooking a lot of pots including filming and consulting at restaurants and hotels. She is also headed out for the James Beard Foundation’s  Chef Action Summit, and hopes to make a difference in people’s attitudes toward food and women chefs: “For me minority chefs, female chefs are something I like to support and I have an all-women team.”
Any thoughts of taking her culinary talents to India and to the television food shows?  She says, “I would love to do a collaboration dinner with some chefs over there. There is talk in the works of this potentially happening.”
Although she’s all about innovation and fusion in her creations, Roshni Gurnani is a diehard fan of the food she grew up with. She loves the home-cooked, simple meals that her mother and grandmothers fed her. Asked what’s the one dish that is guaranteed to put a smile on her lips, she instantly says: “Sindhi biryani!”
Lavina Melwani is a New York-based journalist who blogs at Lassi with Lavina.
Read Lavina Melwani's columns here.
Check out our in-depth Market Coverage, Business News & get real-time Stock Market Updates on CNBC-TV18. Also, Watch our channels CNBC-TV18, CNBC Awaaz and CNBC Bajar Live on-the-go!