Europe’s largest brand of silverware, patronised by the likes of Vladimir Putin and Omani royal family, makes its way to India

Updated : September 11, 2019 12:47 PM IST
Established in late 19th century, in a region which was once Denmark but is now Germany, Robbe & Berking ties up with SR Artefacts to debut in the country.
The handcrafted silverware is made using the ancient art of silversmithing, which travelled from alien shores to Denmark.
The designs are hand-engraved and the now German brand offers bespoke services to families and individuals wanting to engrave their names on the cutlery.

All the talk of economic slowdown has seemingly not affected luxury businesses that plan to enter India, albeit in whichever small way possible. Among the newest launches is a very unusual German brand, Robbe & Berking, a silver cutlery and barware brand patronised by the crème de la crème from across the world. Among them, the administration at Kremlin led by Vladimir Putin, the Omani royal family, the Sultan of Brunei, and in the past by Aga Khan and King Hussein of Jordan, besides a host of Michelin-starred restaurants.

The German brand, Europe’s largest manufacturer of silver cutlery and a fifth-generation business, has made its way to India with SR Artefacts, an Indian luxury silverware brand. Arno Böhnert, sales director for India, MEA & APAC, says that the country is a natural step in this global journey of this late 19th-century brand which was founded in Denmark. “India has a long history of luxury, particularly amongst the royalty, and then the Indian elite who buy Robbe & Berking in Europe. So there could not have been a better time to debut in the country.” The designs are hand-engraved and the now German brand offers bespoke services to families and individuals wanting to engrave their names on the cutlery.

The partnership with SR Artefacts, says its managing director Prashant Sarawgi, would offer up their wide network of clients to the German brand. “We have an exclusive showroom in Mumbai where clients drop in by appointment. This is the kind of ambience and service you need for a brand such as Robbe & Berking, which has a strong bespoke component. You can get your initials or your family name engraved on the silverware.”

Since it was founded almost a century-and-a-half-ago, Robbe & Berking silver flatware and hollowware (cutlery and tableware) has become synonymous with fine living. Established by master silversmith and company founder Nicolaus Christoph Robbe, he learned the art of silversmithing in a master’s workshop in the Katsund section of Flensburg, an area that does not exist on the map today. From 1460 until 1864, Flensburg was part of the Kingdom of Denmark, but after years of conflict between Denmark and Germany, it changed nationalities. Since it was founded almost a century-and-a-half-ago, Robbe & Berking silver flatware and hollowware (cutlery and tableware) has become synonymous with fine living.

Its heritage of handcrafted silverwork dates back to the 16th century when Flensburg transformed into an important northern European trading settlement, frequented by global tradesmen and merchants who dealt in luxury items such as silver. Robbe founded a small silver studio in 1874 with his wife Luise. In 1897, the young master silversmith Robert Berking joined the business and a year later, after marriage to Robbe’s daughter, Henriette, became part of the family. Technically and artistically inclined, he was known for his fine craftsmanship and developed the company’s first silver cutlery designs.

Many of his designs continue to be re-commissioned by Robbe & Berking. For instance, the Hermitage cutlery pattern was reissued as a historical remembrance to mark the company’s 140th anniversary. “What distinguished the pattern is the combination of chiselling, engraving, and hand-hammering techniques visible on the flatware’s handles. The spoon’s transition section (the space between the handle and the bowl) is thinly worked, elongates in trapeze shape, and ends in a trefid motif at the top of the handle with the gable pointing down,” says Böhnert, running his finger on the hammered pattern. Its heritage of handcrafted silverwork dates back to the 16th century when Flensburg transformed into an important northern European trading settlement, frequented by global tradesmen and merchants who dealt in luxury items such as silver.

Berking also designed the Ostfriesen (East Frisian) pattern, a curvilinear form and hand-engraved design with round contours, which is distinctive to the Nordic countries. Historically hand-engraving is a technique used to carve or incise a specific design with an engraving needle into the silver piece. Berking’s successful Ostfriesen pattern was copied by another 19th-century German silver manufacturing companies. Today, the family business is run by Oliver Berking, who took over the company in 1997, after 12 years of working with his father. His mission was to expand the company globally.

Besides the cutlery, the brand has a range of barware, barbeque cutlery, and the classic ‘12 Sterling Silver Flatware’, inspired by 12mts yachts that epitomised sailing elegance and beauty in the 20th century. This flatware collection features beautiful sleek angles that mimic the sails of these striking ships, Böhnert tells me. 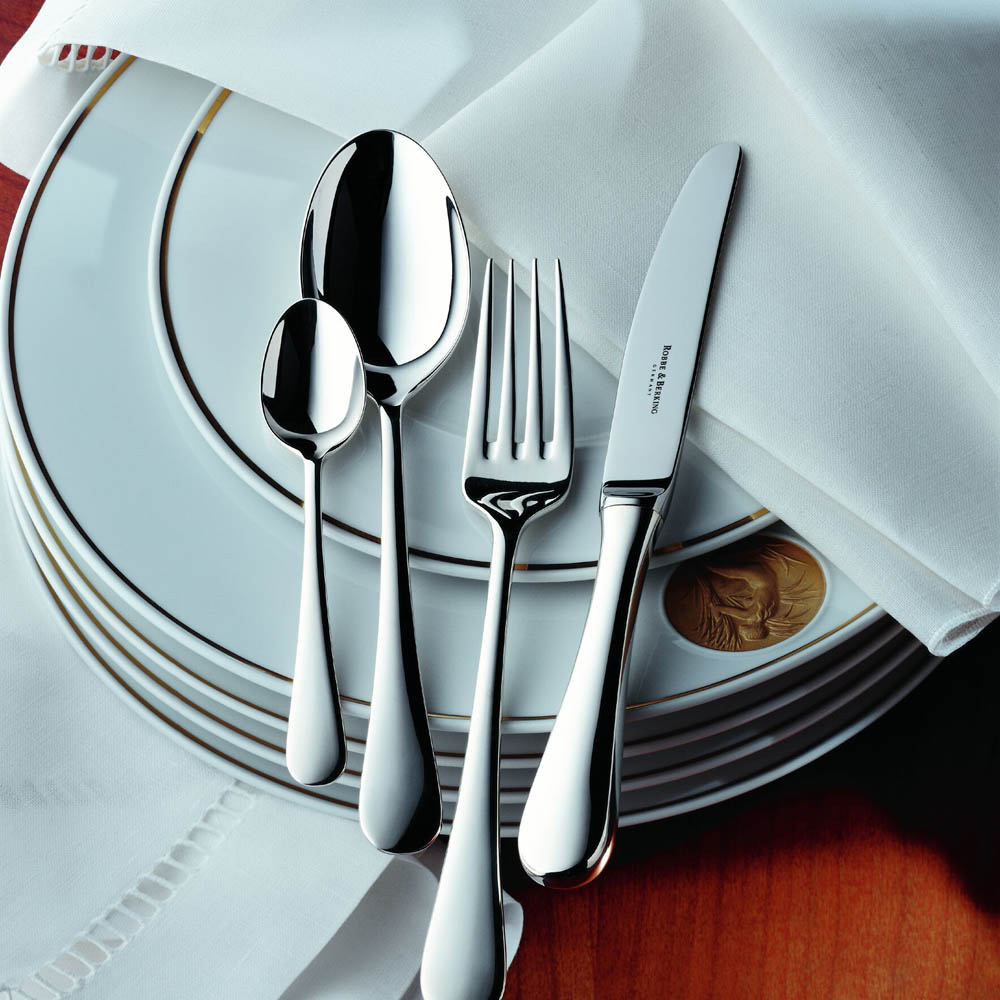 Besides the cutlery, the brand has a range of barware, barbeque cutlery, and the classic ‘12 Sterling Silver Flatware’, inspired by 12mts yachts that epitomized sailing elegance and beauty in the 20th century.

Robbe & Berking’s designs continue to be influenced by Danish style and fashion, which are more utilitarian than ornamental, with an emphasis on shape and function. Such as the Alta pattern designed by master silversmith Wilfried Moll; the flatware pattern won Form88 for Hollowware Award in 1988.

Sarawgi believes that the Robber & Berking cutlery is best suited for a coastal city like Mumbai since its silver coating is two-thirds thicker and lasts longer. The cutlery is produced in 150g solid-silver plating only and Robbe & Berking uses nickel silver as the base material. “It is resistant and does not show ugly yellow spots should the surface become damaged at all, nor does it lose the sheen and turn black due to the salty sea air.”