Effect of rising dragon: How the China factor is bolstering US-India ties

Updated : May 13, 2019 01:27 PM IST
China has also influenced economic decisions in the US and India, particularly since President Trump came to power.
US-India defence and strategic ties are closer than ever and have become the key driver of the bilateral relationship.
Washington has backed New Delhi in the latter’s long-standing opposition to Beijing’s Belt and Road Initiative.

Since 2014, Prime Minister Narendra Modi has made 41 foreign visits to 59 countries. The countries he has visited the most – five times each – are the United States and China. Over the past five years, as Washington envisions a greater role for India in its Indo-Pacific strategy, India's ties with the United States and China have become increasingly intertwined, both on security and economic issues. While on security, the strategic implications of the rise of China have created opportunities for deeper collaboration, both countries' protectionist policies, driven by their respective trade deficits with China, have created tensions in their bilateral relationship.

Collaboration on security and diplomatic issues

As I have argued in this election series, US-India defence and strategic ties are closer than ever and have become ‘the key driver of the bilateral relationship’. This deeper collaboration is driven, in part, by a mutual interest in managing the security challenges emanating from China’s rise. To be clear, the China factor is not the only factor driving US-India ties, nor is it the biggest factor. Both the US and India have pointed to a shared democratic system of government and a mutual respect for the rules-based order as the foundation for why both countries should deepen ties with each other. However, the strategic implications of the rise of China, and how this rise could limit each countries freedom to choose their future destiny, is playing an outsize role today. 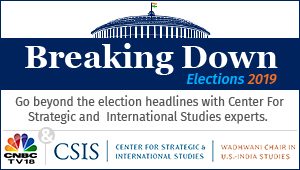 This impact has already become evident across the United States’ diplomatic efforts. While the United States had been the biggest advocate for India's membership at the Nuclear Supplier's Group and had supported India's push to designate Masood Azhar's designation as a global terrorist at the United Nations, China had been, and continues to be the leading detractor, voting against India on these issues. Moreover, the US has joined India in the latter’s long-standing opposition to China’s Belt and Road Initiative. The two countries, along with the European Union, collaborated together to delete references to the BRI in United Nations resolutions, demonstrating the depth of alignment between the two countries.

Similarly, on security-related issues, both countries have deepened their partnership. In 2016, the US designated India as a ‘Major Defence Partner’, a unique status for India aimed at institutionalising ‘defence trade and technology sharing with India to a level at par with that of the US’ closest allies and partners.” India’s acquisitions under this framework demonstrate their strategic alignment.  India has placed orders for American C-17s, C-130Js, and Chinook and Apache helicopters to boost its strength along India’s un-demarcated land border with China. Similarly, India’s acquisition of the P-8 maritime surveillance aircraft is aimed at improving its reconnaissance of Chinese activity in the Indian Ocean.

Misalignment on economic and trade issues

China has also influenced economic decisions in the US and India, particularly since President Trump came to power. Indeed, during his campaign for president, Trump declared China as “an economic enemy, because they have taken advantage of us like nobody in history... They've taken our jobs.” Since coming to office, his administration’s National Security Strategy has argued that “economic security is national security,” and committed, without naming China, to “no longer turn a blind eye to violations, cheating, or economic aggression.” India, too, has made protecting its domestic industry from China a focus of its economic policymaking. In February 2018, Finance Minister Arun Jaitley announced India’s first set of custom duty increases across nearly 50 products. These products, which range from labour-intensive goods to telecommunications equipment, overlap significantly with India’s main exports from China, implicitly underscoring China’s role in this decision.

Despite this convergence, the United States and India have not aligned their economic outlook vis-à-vis China, and instead have had their policies hit out at the other. India’s steps to raise custom duties, price controls, local content rules, and new regulations on data localization and e-commerce have created irritants in its relationship with the United States. Similarly, the US placed steel and aluminum tariffs that were aimed primarily at China, at India as well, which have hurt bilateral ties, given that India exports more steel and aluminum to the US than China. Further, as I have argued elsewhere, the US decision to withdraw benefits under the Generalised System of Preferences for India can actually create opportunities for China, which maintains a trade surplus with both India and the US.

Therefore, the China factor continues to play a role in US-India diplomatic, security, trade, and economic ties. While the US has largely aligned their views on tackling this China factor in the diplomatic and security realms, they have not been as successful on trade and economic issues. If the United States and India are truly to be “the port and starboard lights” of the Indo-Pacific, they need to confront these misalignments and create greater clarity on the strategic considerations both countries face vis-à-vis China.

Aman Thakker is a Research Associate with the Wadhwani Chair in US-India Policy Studies at CSIS.

Breaking Down Elections 2019 is a series of articles by experts of Center For Strategic and  International Studies that will go beyond the headlines to provide a deeper look into what the 2019 Lok Sabha Elections means for the Indian polity and electorate.
Tags china CSIS india-china ties US-India Views