Does India have a public-safety problem?

Updated : May 30, 2018 02:07 PM IST
What is interesting is that none of these were caused by natural hazards like earth quakes.
In most developing nations, it is assumed that there will be a certain safety standard insofar as new constructions are concerned.

Last week, a three-storey building collapsed in Jodhpur. There were many injuries. I couldn’t ascertain whether there were any casualties, as media stopped covering the story, after the inditial announcement. About a fortnight ago, a flyover collapsed in Varanasi. 15 people lost their lives. The structure was under construction, when blocks of cement fell right below, on the road which was under use.

But, for the fact that Varanasi is the Prime Minister Narendra Modi’s constituency, the incident, possibly, would have not even made it to the news cycle. In the first week of May, the Bomikhal overbridge collapsed killing one in Bhubaneshwar. Just a few days later, a bridge across a drain, collapsed in Bengaluru, leaving 4000 people stranded. There were no casualties, but there was a tremendous loss of time. If you deep dive into the data, and look at the breakup this is how it looks

What is interesting is that none of these were caused by natural hazards like earth quakes. Those are recorded under a different had by NCRB. These deaths are on account of poor safety standards in operation.

In most developing nations, it is assumed that there will be a certain safety standard insofar as new constructions are concerned, and people will not die from structures collapsing on them. They also ensure that older structures are repaired on time, and structures that cannot be repaired are condemned for demolition. Also, there are very clear ‘under construction’ safety protocols in place – that cordon off areas right below the construction zones, to minimise damage.

Public officials, paid by the taxpayer, are supposed to consistently monitor safety procedures, revise them when required, and ensure that they are ruthlessly administered to guarantee the lives and limbs of citizens. Which is why you rarely hear of building or bridge crashes in developed countries, and even when they do, the casualties are once in a decade or so. It is not as though these kind of safety protocols are alien to India. We have seen them in operation when the metros have been constructed right through busy thoroughfares. It is just that there is no systematic application of safety at workplace rules.

The construction sector in India is governed by the Building and Other Construction Workers (Regulation of Employment and Conditions of Service) Act, 1996, and is supposed to govern the safety and welfare of approximately 4.4 crore construction workers(NSSO 2009-10). But given that much of the employment in this sector is temporary, unstructured, and unskilled – the incidence of casualties and fatalities is high.

The Occupational Health and Safety Profile – India, 2017 report states that the maximum number of fatalities due to ‘maximum accidents occurred in construction industry due to fall from height which was about one third of the total accidents occurring in this industry followed by electrocutions.’ If any of you have been to a construction site, and seen people climb up the tied together bamboo scaffolding, without safety harness; or seen the way naked wires are plugged into power points, these numbers will not surprise you. 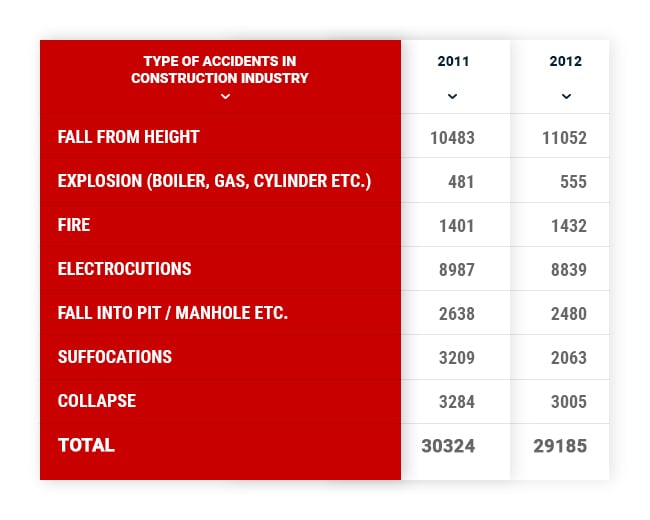 While safety at the workplace needs to be strengthened, and existing rules imposed – given the rapid pace of construction in India, it is likely that the workforce to check on violations is spread thin. Also, given the rampant corruption associated with this sector, most inspections are possibly paid off before they suggest any remedial action.

But, there is another part to this entire problem, and that is the impact of lack of safety on the public. Every time a building collapses, or a bridge falls – people are impacted. And, these kinds of incidents aren’t rare. They are everyday occurrences across India. However, as citizens, we don’t take the lack of safety very seriously. A construction that obstructs pedestrians or traffic, is just seen as one more thing we have to overcome. We don’t see it as impacting us, till it does.

While rules will make some of us more compliant, the need of the hour is inculcating safety in everyday life. And, that will only happen when we start valuing human life. Not just ours, but the lives of everyone.
Tags Public Safety Views