Delhi riots and remedies: Why fixing our systemic problems is the only way out

Updated : February 27, 2020 12:46 PM IST
The key ‘national’ party, the Indian National Congress, has not got its act in place 9 months after its disastrous performance in the general elections.
India simply doesn’t have enough jobs, and there are enough studies that correlate a high rate of unemployment with urban riots.

The plumes of black smoke that you see on your timeline, or on WhatsApp forwards, or on news channels is not from some remote part of the country or the world. It is from the capital city of the Republic of India – New Delhi. At the time of writing, 27 people had lost their lives, and 200 were reported injured. The last time the city saw violence erupt in such an organised manner was 1984. This week, amidst the visit of US President Donald Trump to India, communal clashes took place. The news of the visit, the trade deals, and the diplomatic bonhomie overshadowed by the violence.

While the flashpoint of the riots can be attributed to a number of players – politicians trying to rise up the ladder, media trying to burn the country for ratings, Delhi police doing nothing – the causes of this are more systemic:  A feature of our political system that is going through a churn, and our economic system that has left millions without a job or even the hope of a job.

At the top of the list is a government that does things without knowing what it will do next. A case in point was demonetisation – the sucking out of 86 percent liquidity out of the economy without a plan to replenish liquidity rapidly. Abrogation of Article 370 – another – kept citizens cut off from the rest of India for almost 200 days as part of ‘a method of integrating them better with India.’ The government didn’t seem to have a road map then, and they don’t seem to have one now. The less said about having a plan for moving the economy out of doldrums the better; the same is the case with the current situation. With the CAA, NRC chronology established and reiterated, is it that the government didn’t expect protests? Or is it that they didn’t expect multi-community protests? Is it that they didn’t expect students to turn up in such large numbers, including students who voted for them in 2019? There seems to have been no plans for outreach. No plans for discussion; there still doesn’t seem to be a clear way forward.

At the second level, we have an Opposition that is in deep slumber. The key ‘national’ party, the Indian National Congress, has not got its act in place 9 months after its disastrous performance in the general elections. Their leadership issue is in abeyance, and on most days they look rudderless. They may be reviving in the states, but that is despite the leadership at the centre. The rest of the parties are at best regional players, and there is nothing that is going to change that in the near future. Both the Congress and regional parties collectively speak the language of the 1990s and are out of touch with the people. During the protests, they were conspicuous by their absence. The Aam Aadmi Party, which was voted into power for a third term, could have done something about brokering a negotiation in Delhi, but didn’t. Arvind Kejriwal has been seemingly struck dumb with his helplessness. The crisis in the Opposition is another reason why we have got this situation. If they weren’t dynastic entities that suffocated talent in their own parties to favour their families – would we be in a situation where a government rams through legislation without enough public discussion or consensus?

The third factor is the economy. Economically we are not doing well, and a global downturn in the light on the coronavirus is not going to help us get better. Prices are rising. The inflation rate was 7.6 percent in January, with food inflation at 14 percent.  Unemployment is an issue. If young people are in jobs, they aren’t out on the street rioting. And, India simply doesn’t have enough jobs. There are enough studies that correlate a high rate of unemployment with urban riots. The unemployment rate currently is 7.9 percent , with the unemployment rate in Delhi at 22 percent. 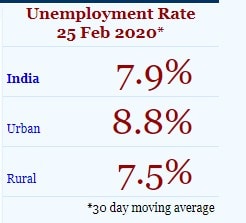 At the last level is the extreme polarisation being spread by mainstream media, social media, and organised IT cells that proliferate hate and lies. They transmit anger and emotional violence against us, on a consistent basis – keeping us scared and angry. A dangerous combination. And, it is starting young. We are all used to seeing young boys in Kashmir turn into stone-throwers. Now you see young boys in Delhi do the same. Pictures of gangs of boys, who probably aren’t even adults, carrying rods, and planks – either to attack or defend - are shattering. There is one thing about the rage of adults, when children are radicalised, as a people we need to sit back and introspect on what we are turning into.

All of this is fixable, and India and Indians have done it before. It is not impossible. It may not even be in the realm of very difficult if we put our collective minds to it and plan it out in detail. But, the four have to be addressed together. The government must listen. There must be an Opposition that questions the government legislatively. The economy has to be fixed, and the polarisation has to be cracked down upon. But there needs to be a political will to get this done. And that seems to be missing.