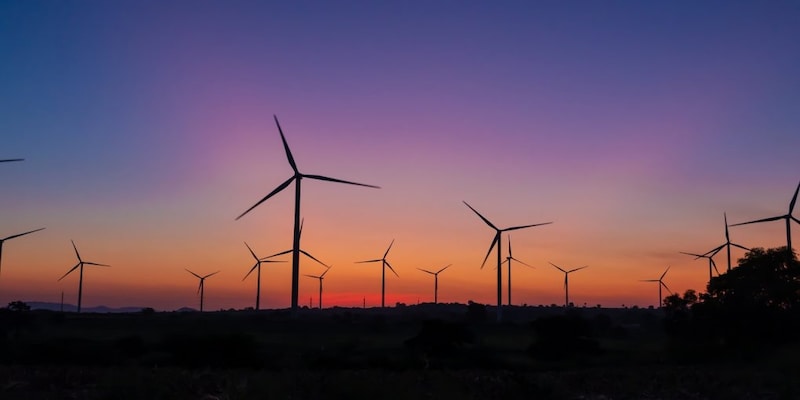 Wind energy is expected to be one of the two mainstays of India’s ambitious energy transition. But if the wind sector is to live up to its potential, we need to devise a strategy to prepare it for climate-induced risks. There is little time to waste.

India’s wind power capacity makes up 10 percent of its total installed electricity base and is expected to more than triple in size by 2030. This significant expansion could help the country meet its growing demand for affordable electricity and transition to a more climate-friendly energy future.

But as weather anomalies and extreme events grow ever more frequent, wind resources can become less easy to predict. A recent example is the unusual pre-monsoon weather that led to a dramatic plunge in India’s peak season wind power generation in 2020.
Further, a recent Intergovernmental Panel on Climate Change (IPCC) report confirms that global warming is poised to breach the critical 1.5°C tipping point, leading to the intensification of extreme events and other dire consequences.
We must therefore act quickly to climate-proof our wind assets and secure their long-term performance to attract a strong pipeline of investments.
Wind power generation in India peaks during the monsoon (between June and September). In 2019, more than half of the total annual generation came during this season.
In 2020, wind energy production in the monsoon months fell by 24 percent relative to 2019. The country’s western region, which houses 40 percent of its total wind capacity, was the worst hit.
A CEEW study found that this dramatic decline was the result of a chain of meteorological events driven by anomalies in the pre-monsoon: a warmer-than-normal Indian Ocean, cooler northern plains, and a wetter pre-monsoon.
A further cause for concern is the historical decline in wind speeds over the Indian subcontinent. Since 1979, annual average wind speeds have reduced at the rate of 0.24 m/s with each decade, with the steepest falls occurring in June and July.
These findings have implications for stakeholders in India’s power sector, including discoms, system operators, and investors.
CEEW research shows that a 10 percent drop in a wind power plant’s capacity utilisation factor every five years during the plant life could lower equity returns by 1.8 percent.
This could impact profit margins in a fiercely competitive sector, but revenue losses are not the only risk. Less predictable wind resources could also increase regulatory penalties for inaccurate forecasts.
Further, grid operators will need to manage resulting demand-supply mismatches in real-time. For instance, India’s western region saw increased production of hydro and coal power last year to counter the dip in wind generation.
Finally, discoms will need to contract additional capacity or buy more renewable energy certificates (RECs) to fulfil their renewable purchase obligations (RPOs) if renewable energy production falls in any given year.
Also Read | All you need to know about India’s Rs 3 lakh crore smart meter project
How can we climate-proof the wind sector?
India can take several steps to ensure that its wind sector remains resilient to unexpected and extreme weather events.
First, central and state electricity authorities must ensure that generation data for every wind plant in India is made available in the public domain for rigorous year-on-year assessments. The information released should include details of the extent of forced back-downs to rule out external reasons behind reduced generation.
Second, the National Institute of Wind Energy (NIWE) could set up a National Wind Resource Monitoring Centre in collaboration with the Indian Meteorological Department (IMD) and the Indian Space Research Organisation (ISRO). This new body could oversee the measurement of wind speeds and frequency distribution through long-term meteorological masts in major wind pockets. It could also frequently update wind resource maps to make the latest resource profiles available to developers.
Third, we need the industry to invest in tools and techniques that make more accurate wind forecasts (with lead times of one to three months). Research institutions in the US and Europe have tried to test the reliability of ensemble forecasts capable of predicting wind droughts with significant lead times. While these were not highly accurate, they did indicate lower-than-normal wind speeds. India, too, can use such forecasting algorithms to predict anomalous wind events. Further, their accuracy can increase with the constant application over time.
Fourth, we must invest in wind infrastructure capable of operating efficiently despite climate-induced anomalies and extremes in weather. Estimates by the Indian Wind Power Association (IWPA) suggest that wind generation declined by 20 percent during 2020 despite cyclonic conditions experienced throughout the year. This happened because wind farm operators took precautionary measures to protect their turbines. Climate-proof infrastructure, on the other hand, could help them take advantage of high wind speeds during extreme events.
Finally, the wind industry and research institutions must invest in robust high-resolution modelling efforts. Doing so will help identify, map, and determine the impact of changing climatic variables on wind speeds and patterns, leaving the sector better equipped to mitigate resource risks.
Wind energy is expected to be one of the two mainstays of India’s ambitious energy transition – the other being solar. But if the wind sector is to live up to its potential, we need to devise a strategy to prepare it for climate-induced risks. There is little time to waste.
—Disha Agarwal and Abinash Mohanty, are both Programme Leads at the Council on Energy, Environment and Water (CEEW), an independent not-for-profit policy research institution. The authors acknowledge the contribution of Ganesh Radha-Udayakumar. The views expressed are personal.
(Edited by : Yashi Gupta)
Check out our in-depth Market Coverage, Business News & get real-time Stock Market Updates on CNBC-TV18. Also, Watch our channels CNBC-TV18, CNBC Awaaz and CNBC Bajar Live on-the-go!