If personal consumption is incentivised but income growth remains weak, as has been the case over the past 6-7 years, the economy will remain structurally vulnerable and in fact worsen faster.

The economic slowdown has led to a lot of talk about the need to revive consumption growth. But the real problem is that income growth has simply not been able to match the sharp rise in consumption in the last decade. For the first time in the post-independence history of India, personal consumption growth outpaced the increase in personal income in the decade that just ended (2010s). Simply put, Indians are spending money at a faster rate than they are earning.

Household real personal disposable income (PDI) has grown at an average of 6.2 percent in the 2010s. However, real personal consumption expenditure (PCE) surged 7.6 percent, the highest decadal growth since Independence.
Consequently, not only household savings have fallen sharply but also its leverage has increased markedly during the past few years. While household debt as a proportion of PDI has jumped to 46 percent in 2018-19 from 26 percent in 2004-05, household savings has steadily declined to 21.9 percent from 29.5 percent during the timeframe.
The prescription to cure this malaise — don’t cut taxes but increase income tax deductions as this will boost savings, say experts and market veterans.
The forthcoming union budget should avoid the strong urge to boost consumption spending by cutting personal income taxes because the problem lies in subdued personal income growth, they say.
If personal consumption is incentivised but income growth remains weak (as has been the case over the past 6-7 years), the economy will remain structurally vulnerable and in fact worsen faster. Personal savings should be incentivised by increasing the deduction limits under various sections (80C, 80E, 80EE, etc.).
Incidentally, the deduction under Section 80C, which is limited to Rs. 1.5 lakh now, was last raised in 2014. The limit then was just Rs 1 lakh under Section 80C, the most popular option among taxpayers. “With a variety of investments and payments already getting covered under this section (80C) — contribution to PF (provident fund), NPS (national pension scheme), tuition fees and repayment of housing loan itself consumes the limit and hardly leaves any scope for saving in other eligible investments. Raising the limit to Rs 2.5 lakh will help taxpayers to save more for their future,” says Kuldip Kumar, Partner & Leader, PwC India. 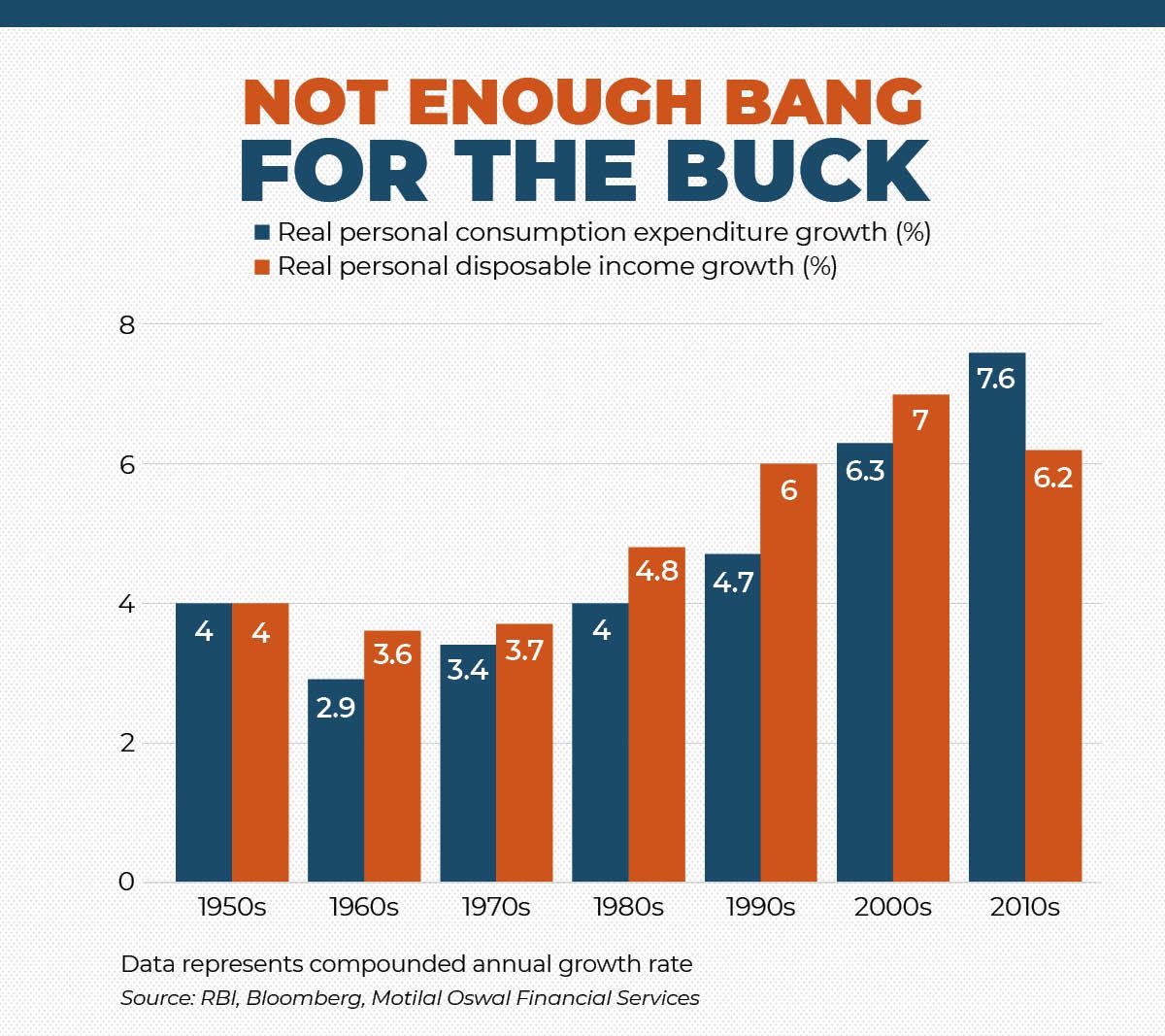 “Although it (higher tax deductions) will entail small fiscal costs and may hurt personal consumption growth over the short-term, it could potentially address the most serious structural issue and help ease the domestic financial markets, which would help lower interest rates,” according to Nikhil Gupta and Yaswi Agarwal of Motilal Oswal Financial Services.
Boost personal savings and investments
At present, the Income Tax Act does not provide a focused benefit for housing. The lack of exclusive tax benefit on the principal amount of home loans has been a dampener, say industry officials. “A separate annual deduction of Rs 1.5 lakh for principal repayment (on home loans) will provide the much-needed fillip to housing sales,” says Shishir Baijal, Chairman & Managing Director, Knight Frank India.
An increase in the deduction for interest on loan for residential house property (section 80EE) would also boost personal savings and investments, say industry officials. The move would spur the residential property sector and the cost to the exchequer, estimated at Rs 270 crore in 2018-19, would also be very low.
From a peak of about 30 percent of PDI between 2003-04 and 2011-12, household savings stood at around 22 percent in 2017-18, marking the lowest level in the past two decades. Not only has household savings declined, but consumer debt has also increased to record highs in the past few years. The combination of falling savings and rising debt has weakened the balance sheet of India’s household sector. The repair work could well begin with the budget which can gently nudge taxpayers to save more by increasing deductions.
Allirajan M is a journalist based in Coimbatore.
Check out our in-depth Market Coverage, Business News & get real-time Stock Market Updates on CNBC-TV18. Also, Watch our channels CNBC-TV18, CNBC Awaaz and CNBC Bajar Live on-the-go!